It’s all in the balance

Support your post-16 students in their understanding of equilibrium 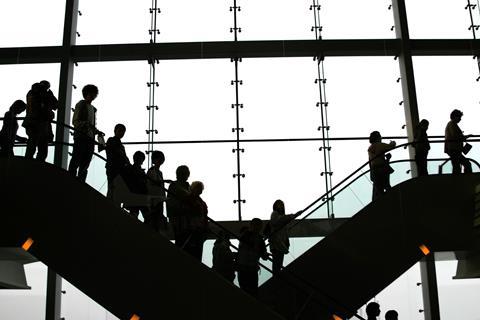 There are several classic equilibrium reactions that we talk about in chemistry, like the Haber process and the contact process, which are fundamental to the global economy. The Haber process produces around 240 million tonnes of ammonia a year (this was the case in 2020) which is mostly used to increase crop production to support the food needs of the planet’s population. But getting good yields of ammonia is only possible through tuning of the reaction equilibrium, and this requires knowledge of Le Chatelier’s principle.

It’s important to realise that equilibrium reactions are ubiquitous: maintaining the pH of our blood; the carbonate balance in the ocean; and the oxygen/ozone equilibrium that maintains our planet’s temperature. These equilibria, and many other systems, from within our bodies to a global scale, are constantly adapting to the surrounding conditions keeping us, and our planet, alive.

Although, looking at macroscopic properties, it may appear that a reaction has ceased, the forward and reverse reactions occur at equal rates in a dynamic equilibrium. If something causes a change to the system, the equilibrium position shifts to counteract this change.

Address misconceptions that may persist from pre-16 learning including:

Further misconceptions at post-16 centre around the mathematical description of equilibria: 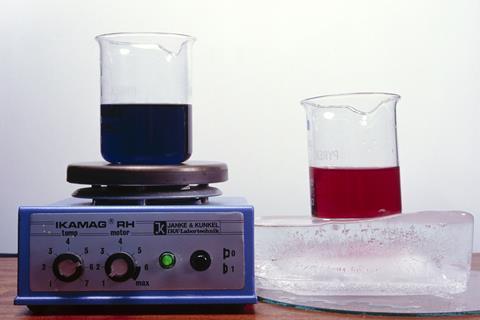 Students may struggle with the conceptual idea of equilibria, due to a strong preconceived notion that only physical changes are reversible, even at post-16 level. You may, therefore, wish to begin by assessing the misunderstandings that your students hold.

There are numerous practical reactions that can support understanding of equilibrium. This carbon dioxide equilibrium links well with thinking about natural systems while showing how closely linked equilibrium and acids and bases are. In this experiment, physical changes (changing the volume, and therefore the pressure, within a syringe) have an effect on the equilibrium, which is visualised, using indicator, through a change in pH.

You could continue by looking at the effects of temperature and concentration on equilibrium position with this highly visual cobalt equilibrium. Here students can manipulate the equilibrium position by adding water/HCl and changing the temperature – a very hands-on experience. Asking them to use Le Chatelier’s principle to describe and explain what they have seen will allow practice of key examination skills.

For mathematical explanations, students will need to carry out several practice calculations. In explaining how to do these, the initial change equilibrium (ICE) method can be useful, see diagram below. Once your students are confident, they can calculate equilibrium positions experimentally, for example in this esterification reaction. Although time-consuming, this reaction allows students to put their knowledge into practice.

For students that require an additional challenge, these activities involve concept mapping and linking equilibria to energetics and kinetics.

Example of the ICE method

2 moles of A and 3 moles of B are placed in a 2-litre tank. Two days later there are 2.7 moles of C present. What is the equilibrium constant? 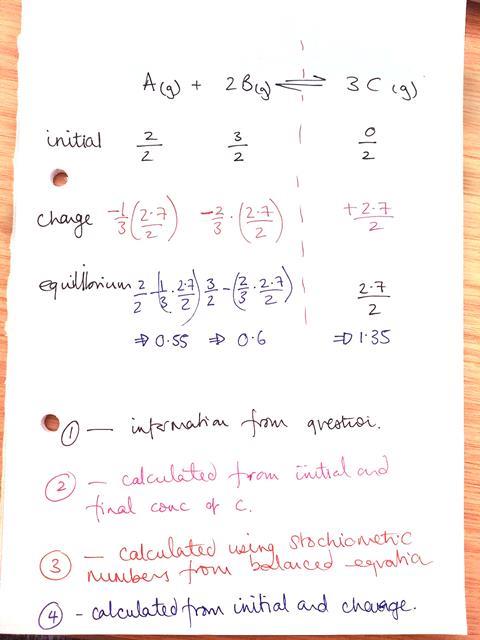 From here the equilibrium constant can be calculated.

These Starters for 10 equilibrium questions allow students, or you, to assess understanding of dynamic equilibria, Le Chatelier’s principle and industrial processes. Answers provided could be used for peer or self-assessment.

Multiple-choice questions can be used to assess calculations, with both a correct and (common) incorrect answer given. You can help students to overcome common errors by asking them to identify which mistakes led to incorrect answers.

Students also need to practise long-form questions because marks are often lost here. There should be a focus on both describing and explaining what’s occurring, considering rate, concentration and equilibrium position.