Demonstrations to capture the student's imagination, by Declan Fleming of Pate's Grammar School, Cheltenham.
In this issue: Going for Gold!

Gold is the most malleable and ductile of all metals. It can be hammered to a few hundred atoms thick and we don't have to panic too much about wasting small quantities when demonstrating some of its interesting properties.

This is a striking demonstration that is great for A-level students when discussing metallic bonding and/or intermolecular forces. On its simplest level, this demonstration lets us see another example of 'like dissolves like' - two chemicals that bond in similar ways are miscible with each other and as mercury is a liquid, it has the capacity to mix with gold.

You can springboard from here into a very stimulating discussion for more able students who will undoubtedly want to know why it is that mercury is a liquid and why gold is the colour it is.

To explain both of these properties, it's over to Einstein! Bohr showed us that the speed of a 1s electron is proportional to its atom's atomic number. When we get down to gold and mercury, our electron is travelling around 60% the speed of light. It experiences nearly a 25% relativistic increase in mass and a corresponding reduction in Bohr radius.

The upshot of this is a smaller gap between the 5d and the incomplete 6s level in gold when compared to silver. This is enough for promotion to cause the absorption of blue rather than UV light and gives gold its colour. This contracted 6s orbital behaves in some ways like the 1s orbital in H and He. Diatomic helium would have a bond order of zero after filling the first antibonding orbital. Similarly, whilst diatomic gold exists in the gas phase (cf H2), mercury is exclusively monotamic (cf He2) and can be thought almost to be like a 'pseudo noble gas' with predominantly Van der Waals interactions. This explains its low melting point and conductivity when compared with gold. 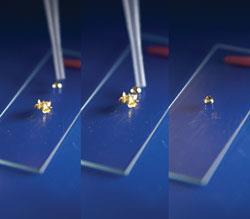 Remove any rings and wear gloves when handling mercury. Place the microscope slide in the tray. It may help to fix the slide in position with a small blob of Blu-Tack under one side in order to make a shallow ramp. Place a piece of gold leaf onto the ramp.

Handling the leaf can be difficult as it tends to stick to everything and is extremely delicate - a brush can help. Craft stores sell specialist brushes for the purpose but this is really only necessary for gilding. It doesn't matter for the purposes of this demonstration whether the gold is damaged.

The demonstration is very simple. Release a small drop of mercury onto the top of the slide. Mercury tends to fall out of pipettes so take only enough to make a small bead

If you did happen to find yourself with some gold leaf that turned out not to be gold you'll find this demo probably won't work. Whilst mercury will happily amalgamate with single electron-donors like silver, gold and the alkali metals to form a 3-electron bond, the two electrons offered by the copper in Dutch metal would result in a 4-electron He2-type situation and the mercury won't want to know about it!

Colloidal gold is very affordable and can show your students that gold doesn't have to be gold in colour. Indeed its colour very much depends on its particle size, much in the same way that the size of the extended conjugated system in the chromophore of a dye will affect its colour.

You may be tempted to try to distil off the mercury - I've found this rather problematic given the small scale. The gold that crystallises, no longer a few atoms thick, is hard to spot! This should only be attempted in an efficient fume cupboard.

Mercury is toxic. It should always be handled over a tray to contain spillages and it should not be left exposed to the open air for long. Small spills can be mopped up with a hot paste of 1:1 calcium hydroxide and flowers of sulfur in water.

Dispose of mercury waste with your other mercury-containing waste (eg broken thermometers) for eventual disposal via a registered waste contractor.