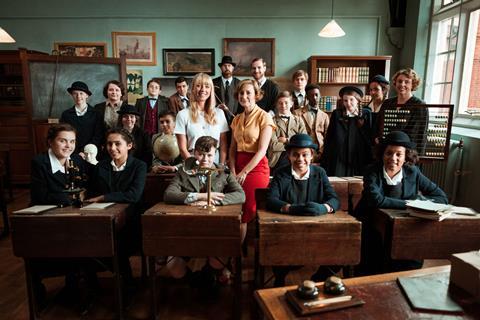 Kristy Turner (second row, second from left) in the 1920/30s classroom from BBC TV’s Back in time for school

Last summer I filmed the BBC2 show Back in time for school, an immersive history programme, which took a group of modern teenagers and teachers through more than 100 years of education. In our time-travelling experience we saw huge changes in education, as well as experiencing a variety of costumes and hairstyles – and many school dinners. Here are eight things I learned about education.

1. Equality between girls and boys isn’t a recent phenomenon

I was surprised to find that Victorian modern schools taught girls and boys side by side, in maths and sciences. However early 20th century reforms pushed girls out of traditional science and into domestic science. Instead of teaching chemistry and physics to a mixed class, I was providing instruction in wallpapering, bed making and cleaning silverware. Aspects of a more domestic curriculum for girls lingered and it wasn’t until the 1970s we saw equality emerge. If domestic science had never been invented, how much further forward would equality in STEM be?

2. The equipment in chemistry lessons 100 years ago looks familiar

Test tubes, tongs and spatulas were essential pieces of chemistry equipment then as now. Despite knowing little about what was causing the chemistry to occur, Victorian teachers did a lot of demonstrations and experiments. With no modern health and safety regulations, accidents were frequent and reports of labs filling with smoke common.

3. SEND provision and recognition of the child as an individual has hugely improved

As the first few programmes in the series showed, the default teaching mode well into the 20th century was one-size-fits-all. Students who struggled were simply left behind and often disciplined for their slowness. Difference was quashed and corrected. I was horrified to have to tie a left-handed pupil’s hand to the desk to force him to write with the ‘correct’ hand.

4. Women have always been the backbone of the teaching workforce

Teaching has often been one of the few respectable professions for women, allowing them to gain financial independence and esteem, unless they married (a marriage bar operated in many areas between the First and Second world wars). However, the top jobs were reserved for men. In the programme, in 1895 only our male colleague was allowed to be the head. Teaching is still dominated by women, but they make up a much smaller proportion of those in the top jobs.

For the first half of our time-travelling experiment science teaching was by rote, direct instruction and lots of copying from the blackboard, with little dialogue between teachers and pupils. In the 1970s the Nuffield science curriculum introduced inquiry and innovations in practical work to the classroom. Science teaching started to look a lot like it does now.

6. Technology hasn’t had as much impact on pupils as predicted

The arrival of computers and photocopiers in our 1980s staffroom was an exciting development. A ‘high tech’ future was promised, with computers revolutionising teaching and learning. In reality, the biggest impact has been in the background administration of teachers’ roles. The 1980s technology revolution heralded the beginning of more frequent reporting, data tracking and accountability – not quite the revolution we hoped for.

7. Men have it easy when it comes to clothes

Teaching science is quite a physical job, it’s almost impossible to do in a corset. Corsets make sitting, walking and using your arms while explaining a scientific concept tricky. We women on the programme bore the brunt of the uncomfortable, unflattering costumes and complicated hairstyles through the eras. The men just wore suits.

8. We should be grateful for our support staff

For much of the century we experienced there was little in the way of help for teachers. Preparing materials for lessons, supervising breaks, serving lunches and cleaning the school all fell to teachers. In 2019, I am certainly glad I don’t have to clean the school.

Back in time for school continues on BBC2 on Thursdays at 8pm, or catch up on iPlayer.