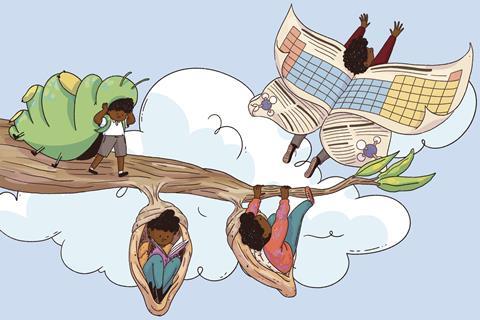 Many students are apprehensive about moving from primary to secondary school, whether they worry about making friends or navigating a large campus. Most schools have programmes in place to ease the transition, but a significant minority of pupils experience difficulties which can filter through to lower grades, poor attendance and increased anxiety in the longer term, according to the UCL School Transition and Adjustment Research Study.

This 2019 study surveyed 2000 pupils from south-east England, as well as parents and teachers, from the end of primary to the end of year 7. The study revealed that pupils had a good start at secondary school if they got involved and felt a sense of belonging.

Primary schools use various methods to smooth the move. These include class discussions about worries, assemblies, school visits and drama workshops. The study found that strategies such as bridging projects, where children begin an activity in primary school and complete it in secondary, were important in helping pupils to feel less anxious.

Secondary schools, too, use a range of strategies. The report specified that the following strategies worked well: informing year 7 teachers about individual student needs and family situations; helping students navigate schools by supporting those who were late to lessons, for example; monitoring difficulties within friendship groups; and having long induction periods (possibly up to six weeks) where year 7s have early lunches and work with mentors.

The transition from primary to secondary varies massively depending on the local area, says Jo Montgomery, a primary science specialist. Some secondary schools have a community of feeder schools, others gain children from near and far. Some primary schools send most of their pupils to one secondary, whereas others may feed into many. ‘Some clusters of schools will work closely together, others work independently. And so, the experiences of children will be vastly different, especially their experiences in science,’ says Jo.

Jo believes the best transition experiences happen in cluster schools where the feeder primary schools and secondary school work closely together over a prolonged period, and not just with year 6 pupils, to ensure a continuity of curriculum, vocabulary, experiences, knowledge and skills. ‘This means that secondary teachers know what children have been taught before and can begin from a more level playing field. Primary teachers [can] prepare children for their next steps and move their learning on, without treading water for some and risking gaps in knowledge for others.’

Expectations of science can also have an impact on transition. Longer-term relationships can illustrate what secondary science might look like, as well as providing primary schools with advice, expertise, equipment and resources, Jo says. ‘Whizzy demos at open evenings of experiments or equipment that children are unlikely to ever use does not support expectations of what secondary science looks like. While these may have a place in engagement, this needs to be underpinned by the science and should reflect what science lessons really look like.’

Shona Donnelly, who teaches chemistry at Marr College, a comprehensive secondary school in Troon, works with five feeder primaries on a practical project designed by the Royal Society of Chemistry. It involves making glue from different types of milk, vinegar and sodium bicarbonate. In the third term at primary school, students try to build the strongest structures from the glue and lollipop sticks. These are then tested the term after when the pupils visit the secondary school on the transition day in June. Shona managed to keep the project running through the pandemic by sending out demonstration videos. For those pupils who hadn’t made models, she had some pre-prepared, and ‘the transition day was a big success’.

Shona believes such activities are helpful because the students get to use some science apparatus before arriving, and they learn to measure, read through instructions and carry out an experiment safely. Primary teachers can also develop direct links with science staff. ‘Primary staff can lack confidence in delivering science lessons and so building relationships is really important. We have tried to incorporate this project into their existing activities.’

There are several important points to bear in mind when working out transition strategies, she says. Any project needs support from the senior management team as staff require time to run projects and visit primary schools. Communication is key. Shona says: ‘P7 [final year primary] staff change from year to year and secondary staff have to start from the beginning again. It helps to give the primary schools as much notice as possible. The primary teachers who were involved were very keen initially, but it can slip off the radar if the schools are not constantly keeping in touch.’

However, Shona is now the only one involved from her school. Staff are reluctant to commit time as they’ve been overwhelmed by national qualification changes and Covid-19. The problem is departmental priorities ’may not include primary/secondary liaison. I’ve been told this year that there is no time in INSET days or twilight meetings for me to meet primary colleagues,’ she says. ’I’ve never had time allocated in the timetable for primary/secondary liaison. This has always been issued to the maths and English departments.’

While activities can help students feel more comfortable, they don’t add much from a science perspective unless they are sustained over long periods, argues Ben Rogers, director of curriculum and pedagogy at Paradigm Trust, which runs six schools in London and Ipswich, including one secondary. ‘My understanding is that young learners find the transition from primary science to secondary science perplexing and frustrating. I don’t think the answer is activities.’

Ben thinks there is a cultural divide between how science is taught in primary and secondary school. ‘Primary science is more holistic – looking at science in the real world and how we use it – whereas, in secondary, the focus often shifts to GCSE preparation from as early as year 7. It is rare for primary teachers and secondary science teachers to discuss science in a sustained and meaningful way.’

The approach adopted by Paradigm Trust is a cross-school science working group which meets termly to plan curriculum and assessment, starting from the Early Years Foundation Stage through to the end of year 9. ‘Primary teachers and secondary science teachers work together so there is a smooth transition through the key stages and not an abrupt jump into key stage 3,’ says Ben. ‘That is the way to do transition. The important thing is that communication flows both ways. It’s important for primary teachers to share their skills in teaching literacy, numeracy and communication – all skills that are needed in science. Secondary teachers can learn from them and not just share their specialist knowledge.’

While Ben recognises this approach is more straightforward for a trust to organise, he believes a group of schools within a local authority could do something similar. ‘It’s a wasted opportunity,’ he says.