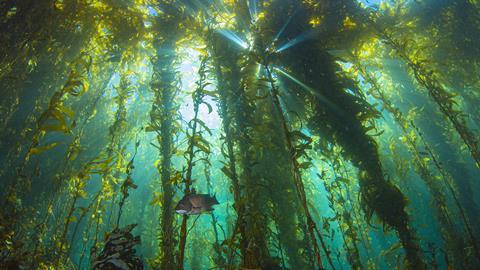 Acid in our oceans

Oceans soak up as much as 30% of total carbon dioxide (CO2) released into the atmosphere from burning fossil fuels and other human activities. But this carbon removal service comes at a considerable cost, increasing ocean acidity and contributing to a loss of biodiversity. This is not only bad for the oceans but also hits human populations, cutting seafood stocks and damaging coastlines. The only real solution on a global scale is to cut CO2 emissions, but scientists are working on effective ways to decrease acidification locally. 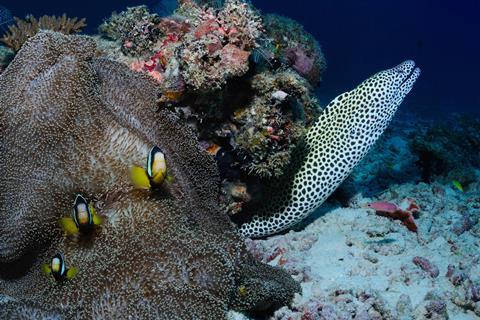 Clownfish hearing may be negatively affected by acidification, giving predators an unfair advantage

Seawater has a pH of around 8.1, down from 8.2 in pre-industrial times. Open ocean surface pH has declined by up to 0.027 pH units per decade since the late 1980s, according to a 2019 report by the Intergovernmental Panel on Climate Change (IPCC). The surface pH could continue to decrease by around 0.3 units by 2100, it predicts.

This may not sound dramatic but a decrease of one pH unit marks a tenfold increase in acidity. Ocean chemistry is finely tuned and affected by any change in acidity. Carbon dioxide dissolves in seawater and forms ionic and non-ionic species, including carbonic acid (H2CO3), bicarbonate (HCO3-) and carbonate (CO32-). The ratio of these species depends on factors such as temperature, pressure and salinity. Dissolving CO2 in seawater increases the hydrogen ion concentration, making the water more acidic: CO2 (aq) + H2O ⇌ H2CO3-⇌ CO32- + 2H+

As the pH drops, the concentration of carbonate ions also decreases. Many marine organisms need carbonate to grow shells or skeletons, so acidification has significant physical effects. For example, acidification affects coral’s ability to build and repair its hard structures, which in turn affects the whole ecosystem that depends on reefs for survival.

Shellfish are particularly sensitive to ocean acidification at the larval stage. As well as shell effects, acidification can also reduce immune defence against parasites and pathogens.

While effects such as thinning shells and damaged coral reefs are clear to see, others are more subtle. For example, researchers have found that acidification may damage clownfish hearing, affecting their ability to detect predators.

We are all becoming increasingly aware of the impact of human activity on our oceans, and microplastic pollution and the bleaching of coral reefs are now regular topics for discussion. This article reveals the dramatic effect relatively small changes in pH can have on our oceans and its marine life. This article can be used in class to add context to the teaching of acid-base chemistry and help students realise its importance in understanding the impact of climate change on our oceans.

A team at the University of Auckland, New Zealand, reported that young snapper fish raised in predicted future CO2 conditions are less sensitive to low frequency noises. Using computer tomography (3D imaging using X-rays), they found that acidity affected the growth of a key calcium carbonate structure in the fish ear called an otolith. The acid enlarges the structure, possibly because the fish pull in more bicarbonate to maintain the acid-base balance in high CO2 conditions, the researchers suggest. If the fish are unable to adapt to increasing CO2 levels over coming generations, there could be serious effects on the structure and function of future aquatic communities, they warn.

Many studies on the effects of ocean acidification are carried out in tanks. But for over a decade, studies have also been carried out on underwater hydrothermal vents near active volcanoes. Known as hydrothermal CO2 seeps, the vents bubble large amounts of gas into the water.

‘These natural gradients in carbon dioxide are like analogues of the future, showing what will happen to marine life,’ says Jason Hall-Spencer from the University of Plymouth.

Jason has long studied CO2 seep sites off Vulcano island in Sicily. In areas of intense bubbling, with a high partial pressure of CO2 (pCO2), the seawater pH drops below 6 and there are no calcified organisms such as shelled molluscs and hard corals. A few hundred metres away, where CO2 levels are lower, the geochemistry is like future ocean acidification conditions in the open ocean and the community becomes more diverse.

There are seagrass meadows that can store tonnes of carbon for hundreds of years, even millennia

Jason is also based at the Shimoda Marine Research Centre at the University of Tsukuba in Japan, which has access to underwater seeps. There, he is part of a team studying the combined effects of warming seas and increasing acidification by carefully selecting different natural locations.

A recent study used one location to represent a temperate marine ecosystem, while two others were warmer – one with high CO2 levels. The team found the warm, acidic water was dominated by thick, carpet-like beds of seaweed called turf algae, with few corals and very low habitat complexity. The researchers suggest that declining kelp forests off the coast of Japan will be replaced by turf algae if warming and acidification continue.

Similar patterns are seen in tropical, subtropical and temperate seep sites, where habitat degradation and loss of biodiversity are a common theme. Based on this seep evidence, ocean acidification will have serious consequences for the millions of people who depend on coastal protection, fisheries and aquaculture. If we can make major cuts in fossil fuel emissions though, coastal ecosystems will remain in a far better state than predicted at pCO2 levels matching the IPCC’s worst-case scenario. 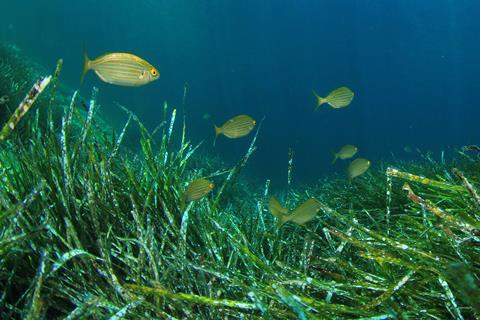 The best way to prevent further ocean acidification across the planet is to cut atmospheric CO2 emissions. However, local measures can combat acidification. These include boosting coastal populations of seagrass and seaweeds, which use CO2 for photosynthesis.

As well as reducing acidity, they also lock away organic carbon in sediments. ‘There are seagrass meadows that can store tonnes of carbon for hundreds of years, even millennia,’ says researcher Aurora Ricart, currently based at the Bigelow Laboratory for Ocean Sciences in Maine, US. Mangrove trees and salt marshes are also remarkably good at sequestering carbon in coastal areas, but because they are not fully submerged, they contribute little to the fight against acidification.

Aurora was part of a study which found that underwater seagrass meadows can alleviate acidic conditions over long periods, even during the night when photosynthesis halts. The water around the seagrass reached pre-industrial pH levels. At night, the researchers suggest that the water was not moving around enough to bring in more acidic water from outside, preserving the higher pH until the sunlight returned.

Aurora is now studying a kelp farm in Maine, looking to understand spatial aspects of pH effects. The buffering effects for both seagrass and kelp appear to be highly local. ‘Now we are monitoring the water chemistry at very high spatial resolution. Instead of having one sensor inside the system and one sensor outside, we have different sensors all over the place,’ she says. The researchers are looking to see if there is a ‘halo effect’ protecting the kelp forest water.

The experiments are complicated by seasonal differences, currents, tides and fluctuating water temperatures. The kelp reaches peak productivity in spring and the researchers can track this very well using pH and pCO2 data. Kelp is more productive than seagrass and can sequester more CO2 through photosynthesis over a particular period, says Aurora.

Use the questions in this exercise to help students further their understanding of acid-base equilibria specifically applied to indicators.

Some researchers favour adding alkaline substances, such as a magnesium silicate mineral called olivine, directly to the sea. Recent modelling by a team from the Commonwealth Scientific and Industrial Research Organisation (CSIRO) Marine and Atmospheric Research in Australia suggests that adding large amounts of alkaline materials to the Great Barrier Reef (GBR) every three days for a year offsets over four years of acidification at the current rate of carbon emissions. But the researchers found the water would return to its former state within six months of treatment. They conclude that ameliorating decades of acidification in the GBR is feasible using existing infrastructure but is likely to be ‘extremely expensive’ and would need to be carried out continuously until humans cut CO2 emissions. 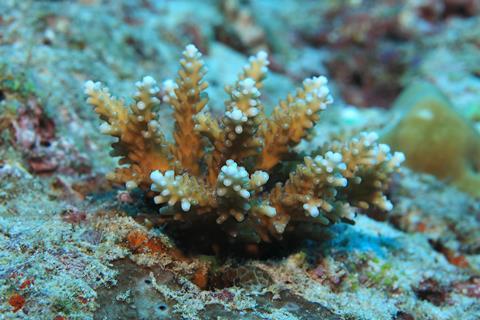 Through its Horizon 2020 programme, the EU funds a project looking into ocean-based negative emission technologies (OceanNETs). One aspect of the project is to look at increasing the alkalinity of the upper ocean to boost seawater’s carbon storage capacity and reduce acidity. One suggestion is to add lime powder. Another suggested approach is to react seawater with alkaline minerals using desalination plants before releasing the alkaline solution back into the ocean.

As part of the OceanNETs project, scientists at Heriot-Watt University in Edinburgh are exploring proposals to increase alkalinity through enhanced weathering. This involves adding carbonate or silicate minerals to the land so that they enter water systems through natural weathering processes. Crushed carbonate materials have long been added to soils. Adding silicate materials could help with climate change and decrease ocean acidification. The scientists suggest that by increasing the ‘alkalinity flux’ from land to the ocean via enhanced weathering, it may be possible to partially replenish the ocean’s buffering.

The UN has a sustainable development goal to ‘minimise and address the impacts of ocean acidification’. Through UNESCO’s Intergovernmental Oceanographic Commission, it aims to encourage scientific research and cooperation to help fill ocean acidification data gaps. Jason and his colleague Ben Harvey are calling for a binding international agreement for the oceans, saying that the time is ripe for a ‘Paris agreement for the oceans’ to build on the UN’s sustainable development goal.

Jason would also like to see a reduction in trawling and dredging, which damage the seabed and release trapped CO2. ‘We need a healthy, functioning ocean to protect us from the effects of ocean acidification,’ he says. He is hopeful for the future though: ‘Oceans have a remarkable ability to bounce back.’