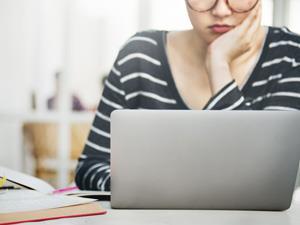 I recently published my first research paper in chemistry education, not only my first in that field but also my first as a sole or lead author. It was an education in itself.

I have been involved in writing papers before, however the reality of a doctorate in organic chemistry is long hours chained to the lab bench doing column chromatography while your supervisor writes most of the paper. Ten years later, that meagre experience seems like a distant memory when embarking on my own journey to publish in a peer-reviewed journal.

The path from idea to publication was long, winding and sometimes wandering off in the wrong direction

Like many teachers, my interests in chemistry education research are firmly rooted in classroom practice rather than in the rich, pedagogical literature.

The activity that I presented in the paper actually came from standing in a supermarket aisle looking for craft materials exactly at the point when I happened to be teaching bonding in both GCSE and AS chemistry. Serendipitous, rather than carefully planned. After nearly 2 years of practising the activity with my own classes and sharing it with colleagues I thought I was onto something that was worth communicating.

Choosing somewhere to publish was tricky

I wanted a peer-reviewed journal with a good impact factor to support my fledgling academic career, but I’m not happy with educational content being behind a paywall. However, the best match for my work was the Journal of Chemical Education, which unfortunately has just that issue.

Internal conflicts aside, I then set about embedding the work in the existing literature. Strictly speaking, this is the reverse of the ideal, more efficient research process. The process of ‘referencifying’ felt very much like a literature review exercise that I might set for undergraduates. I buried myself in papers on teaching sequences and student misconceptions until I had enough of a framework to put my work in context.

I called in favours with friends who are established researchers and asked them to give me feedback. I drafted and redrafted.

I finally submitted the paper in November, it was published in April

That’s a 5 month gap, so what happened in the meantime?

The administration side seemed to run reasonably well and before Christmas I had comments back from reviewers. It was only then I realised that my PhD supervisor had shielded me from the real brutality of the peer review process.

The three reviewers fell with almost comedic placement into (a) it’s great, publish it as it is, (b) it’s ok, tweak it and send it back and (c) it’s complete hogwash, don’t even think about publishing it. Some of the comments were cutting, suggesting there was nothing new about what I was reporting and querying why I hadn’t referenced publications in journals that were so obscure even our (extensive) university library didn’t have access to them.

It was hard to reconcile the comments of reviewer (c) with those of reviewer (a), and it felt very personal. Some kind words and email counselling from those same experienced friends helped me to regroup and take reviewer (b) as the middle ground and work from there.

So the paper was rewritten with a clearer emphasis. I took advice from an American high school teacher to help decode some ‘lost in translation’ moments which had come across in the reviewers comments.

There were also copyright issues with examples of student work within the paper. My very patient Headmaster suffered many urgent requests for letters and signatures on forms until we managed to satisfy the rules.

A final hurdle: the images I had provided (taken with the camera on my tablet) were too low quality to publish. This, farcically, led to me retaking and providing much higher resolution images, which were too large to be processed by the online submission system.

What I learned: lessons for anyone new to publishing education research

My research interests have now developed into new areas but I don’t think I will completely lose the tendency to do things backwards, teaching practice will probably always lead to ideas for me. Still, there are things I would do differently.

I would start reviewing the literature earlier in the development of the idea, even if I had to rely on Google Scholar rather than waiting for better access to journals.

I would remember that reviewer comments, especially in large fields like education, are rarely personal, and I would laugh off the most absurd comments.

I would also sort out my side of the administration earlier; copyright forms and, of course, image requirements.

Kristy Turner is a teacher and school teacher fellow, splitting her time between teaching chemistry at Bolton School Boys’ Division and the University of Manchester.