To crack a safe: why would you want to blow up a safe from the inside? 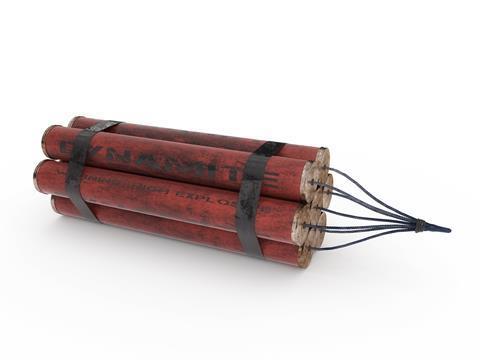 In the film, The Score, Robert de Niro plays a master safe cracker who's talked into doing one last job before he retires - he has to steal a gold statue stored in a safe in a high security building. He manages to fool the security and get to the safe. However, instead of blowing the door off with dynamite, he drills a hole into the top of the safe and, tapping into the room's sprinkler system, fills the safe with water. He then places a test tube of explosive through the hole into the safe and blows it up from the inside out. So is there anything to be gained by doing this or is it just a bit of Hollywood science?

Modern safe doors are made of thick, strong, hard steel and it would take a very long time to drill a large hole into this. In the film de Niro only needs to drill one hole in the top of the safe quickly. It may well be that the safe was thinner at the top, making this easier.

What about the explosives? In fact, more energy is produced burning butter than the same amount of explosives such as TNT or nitroglycerine. Explosives don't generally produce more energy than other chemical reactions, they just react much more quickly. An explosive is a very fast reaction that produces a great deal of gases and heat. One volume of nitroglycerine produces about 10,000 volumes of hot gas at 3000°C when detonated. The heat expands the gases, producing enormous pressures - the explosion. Explosives such as TNT and nitroglycerine also have their own supply of oxygen liberated by their decomposition and so they would work just as well on the airless Moon or in a safe full of water. So, providing he keeps the detonator dry (the test tube), de Niro's explosives should work for this stunt.

What about the water? Well the next time you pump up the tyres on your bike try putting your finger over the end of the pump. You will find that you can compress the air without much effort. Now suck up some water into the pump and do the same thing. You can't compress water in the same way because liquid densities are not far off that of solids. So the water in the safe should transfer the explosive energy more effectively than air.

The speed of sound in water is about five times faster than in air so if you let off an explosion in a safe full of water the blast pulse would have less time to spread out on its way to the walls of the container, maximising the impact. Further, you can get very fast supersonic shock waves in water which would be even better. All in all the water seems a very good idea indeed!

In the BBC TV series Hollywood science we tried this out. We got two small 30 cm metal safes but used plastic hinges and small explosive charges for our safety. We found that the safe with just air was unharmed but when full of water the door flew off smashing the hinges. So de Niro was on to something.