View a summary of how to approach the synthesis of an organic compound, focussing on the construction of key bonds. Follow an example multistep synthesis using standard organic transformations, answering questions along the way. This page is suitable for students beginning organic chemistry.

This page is suitable for students beginning organic chemistry, for learning how to put together a fairly short multistep synthesis using standard organic transformations.

This tutorial uses the “disconnection approach” to designing an organic synthesis, focusing on the construction of key bonds. The process involved in solving the synthesis problem is broken down into a series of simple standard steps, to allow the student to understand how to apply this approach generally.

Map the starting material onto the product skeleton.

We number the carbons to keep track; since we use the same molecule twice, the carbons on the second molecule are numbered as 1’ and 2’. Since the phenyl (Ph) ring doesn’t change, we don’t need to count those carbons, we can just treat the Ph as a substituent group. Ideally you need to be able to map the functional group positions too. You can treat alkenes and alkynes as functional groups. In the example given, the new OCH3 group is simply replacing the old alkene group on carbon-1, and there is also a new connection from carbon-1 to the carbon-2 of another molecule (numbered as 2’). It is always MUCH easier to introduce a connection or functional group at a position with existing functionality there (or at least nearby).

Look at new C-C bond formation. Also show any other key bond constructions, especially if these form parts of rings.

Consider how best to do the key C-C bond constructions; these are nearly always the key steps of the entire synthesis (worth the most points on exams!). Where is the new bond made? As before, try also to compare the positions of functional groups in starting material and product to get the “best fit”. Don’t worry about getting the correct functional group just yet. Refer to the handout on “standard carbon-carbon disconnections”.
Possible reagents/methods for the formation of C-C connections, often seen in introductory organic chemistry courses:

In this case, we want to make an ether, which is related to an alcohol – for this, Grignard chemistry is very versatile. Four relevant C-C bond-forming reactions are shown below. Which of them would be the most suitable in this synthesis? Note: The new C-C bond is shown in bold.

Some possible approaches to the key C-C bond construction – choose one:

See bottom of this page for the answer.

Once you’ve looked at these and picked out the best “match”, you need to work out the rest of the synthesis. This involves two parts: (a) how to make those two key reactants, then (b) convert the above product to the final product. With practice, these parts should be straightforward, as they simply involve functional group transformations – see this reaction map for some ideas. Note that there may be several right answers (as well as many wrong ones!), so you may still be right even if your answer differs from the one shown.

(a) Make the key reactant “pieces”, you need to:

Once you have worked out this part of the synthesis, you can take a look at the most likely route at the bottom of this page.

(b) Adjust functional groups to get to the final product
In this particular case, we simply need to convert the alcohol into the corresponding methyl ether. This can be done using the Williamson ether synthesis:

This is the time to write out the whole synthesis and:

We combine our earlier answer in step 4, part (a), with the Williamson ether synthesis (immediately above) to get the full synthesis:

It’s fine! This should get full points on an exam. However if we want to be “clever”, we can notice that the initial product of the Grignard reaction (before aqueous acidic workup) is a magnesium alkoxide. If we quench this with CH3I instead of H3O+, we can get the product directly and save ourselves the H3O+ step and the NaH/THF step.

For the ketone portion, we need a Markovnikov addition of an oxygen functional group, such as an alcohol. This alcohol can easily be oxidised to the ketone with PCC or a similar reagent. Meanwhile, the Grignard reagent must be made from the primary alkyl halide. The primary alkyl halide must in turn be made via an “anti-Markovnikov” addition, which uses HBr heated in the presence of an organic peroxide.

This synthesis is summarised below:

Organic compounds are generally classified based on the reactive parts of their structures, known as functional groups. The remainder of the molecule is usually based upon alkyl chains, which are relatively unreactive. Each functional group has its own characteristic reactions, and it tends to determine many of the chemical and physical properties of the overall compound.

The reaction map shown below shows most of the common functional groups, and how to convert between them. The large numbers on the right-hand side indicate the oxidation state for the carbon attached to the functional group.1 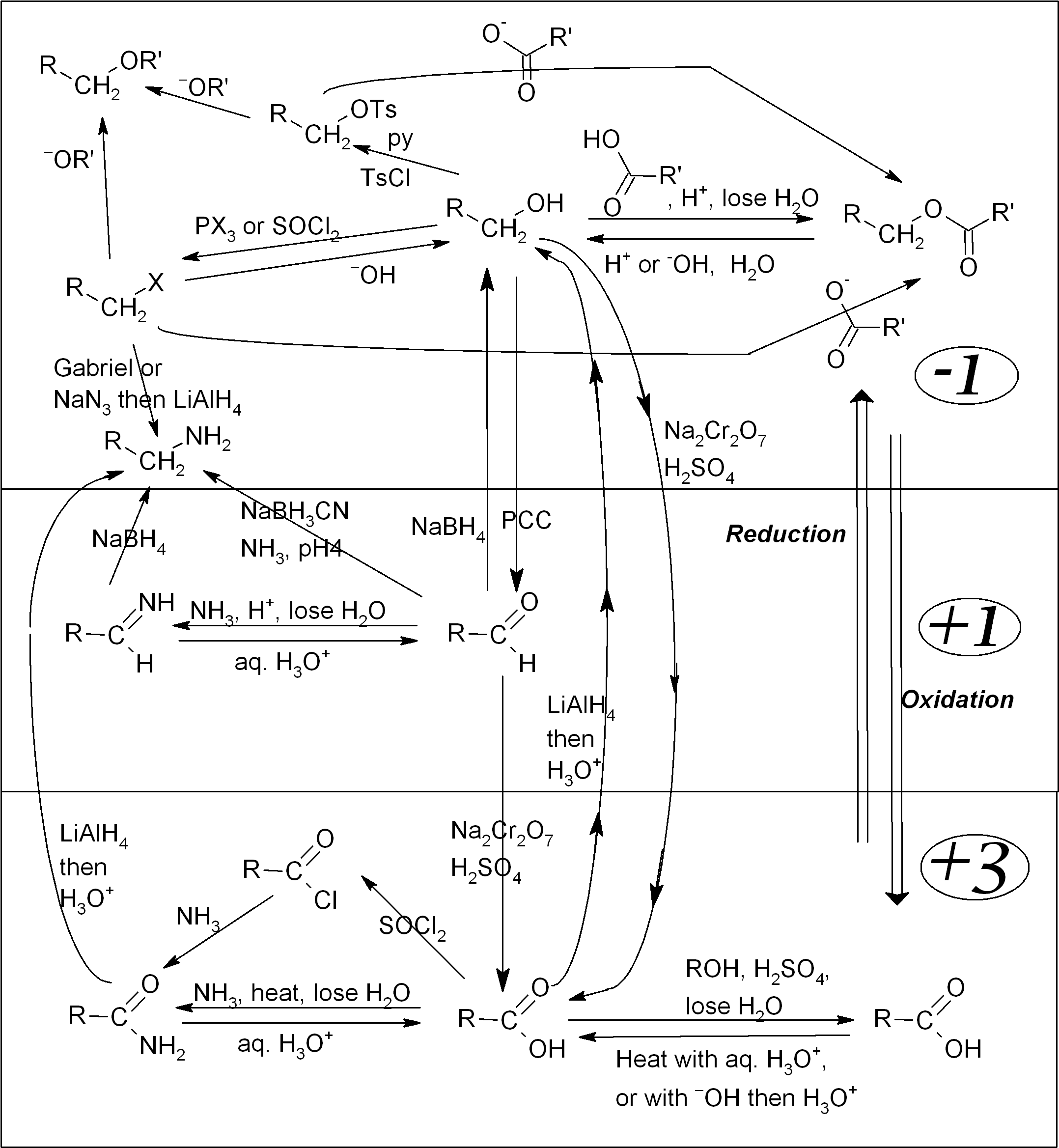 This content is shared under a CC-BY-NC-SA 3.0 license. It was originally uploaded to the Learn Chemistry wiki by Martin A. Walker in January 2011.