Chemical allsorts puzzles to continue in 2021

In 2020 the RSC Secondary and Further Education Group (SaFE) launched a series of short and snappy two-page fact sheets for students of chemistry called ‘Chemical allsorts’. With five released so far, each contains interesting chemical facts with useful follow-up links and puzzles – and the series is set to continue in 2021. 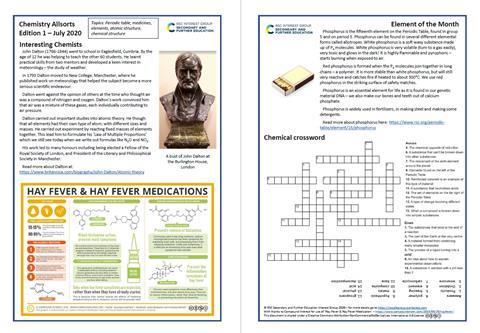 A preview of Chemical allsorts edition 1 from July 2020. Download it as a pdf from the SaFE website

Aimed at students, each sheet starts with a profile of an ‘Interesting chemist’. So far, featured chemists include Rosalind Franklin and her work on DNA; John Dalton of atomic theory fame; and Humphrey Davy, remembered for discovering elements such as calcium and magnesium using electrochemistry.

Students are then presented with a topical infographic – for example on hayfever in July or snowflakes in January’s edition – to give chemical context to relevant, real-life topics.

Next, follows an element of the month, along with links where students can learn more. The sheets are rounded off by a puzzle, such as a chemistry-themed crossword or a sudoku using element symbols and mass numbers instead of the digits 1–9.

The topics touched on are noted at the top of each sheet – everything from medicines and atomic structure to electro- and organic chemistry – to make it easier for teachers to know how it fits into their teaching.

The Secondary and Further Education Group (previously known as the Curriculum and Assessment Group) is one of the RSC’s many member-driven interest groups, or scientific networks run by members for their community. Formed in 2015, it serves as a network for all chemistry teachers and educators in the UK, Ireland and across the world.

Its overall aim is to bring together teachers and educators from all levels and promote and develop the teaching and learning of chemistry in secondary schools and colleges. It also works with teachers and academics to support transition from primary to secondary and secondary to HE.