The annual International Chemistry Olympiad (IChO) is a competition for talented secondary school chemistry students. This year, 326 students from 83 different countries took part, and they had five hours to solve a set of challenging problems in the theory paper. 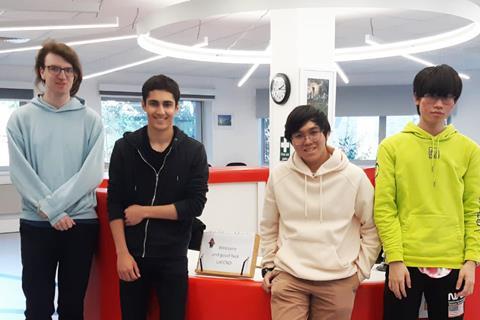 Ben, Leo, Nat and New (left to right) completed their final five-hour papers at the National Mathematics and Science College in Coventry

There were 8668 students from 750 UK schools who entered the UK Chemistry Olympiad, run by the Royal Society of Chemistry (RSC). From that initial round, 34 of the top competitors went on to the second round of the competition, from which the four students were selected. Due to national lockdowns, the two rounds and the international competition organised by the competition host China took place remotely. The four UK finalists had the opportunity to meet up at the National Mathematics and Science College in Coventry for the final five-hour challenge.

Inspired to enter students in the UK Chemistry Olympiad? Applications open for the 2023 competition in late September 2022.

A once in a lifetime experience

Leo says the experience has been ‘really enriching’ and has allowed him to enhance his ‘knowledge of different advanced areas in chemistry’. He also shares that his experience working with the mentors has been really positive: ‘The devotion of the mentors to making sure we all reached our potential was reflected in the high-quality training that we were given. It truly is a once in a lifetime opportunity, and it’s made to be a fun experience as well as an educational one.’ Nat had an equally positive experience and thanks the mentors for their support during the training and exams, stating that they never gave up on the winners. ‘I’m glad that we’ve never let them down from these wonderful results.’

Ben also thanks the mentors, saying that ‘they’ve all been so incredible and considerate’. ‘Having lectures on more advanced topics, as well as being able to attempt a variety of Olympiad problems has been very enjoyable, allowing me to explore many fields of chemistry,’ they continue, ‘and this has shown me which fields I want to continue studying. Overall, it’s just been a very pleasant and one of a kind experience.’

RSC head of education Mark Jordan commends the students on their incredible achievement: ‘Big congratulations to New, Ben, Nat and Leo on winning silver medals in the finals’. Ben Pilgrim of the University of Nottingham and head mentor for the UK delegation also notes the fantastic achievement of these youngsters: ‘We are delighted with the four silver medals won by the UK team. The International Chemistry Olympiad seeks to find the brightest chemistry students from around the world, and we are thrilled that the UK has performed so well, competing against the best of the best from over 80 countries.’

Mark also highlights the background work of the organisers, saying that ‘The achievements reflect a huge personal commitment by the UK team and the extraordinary support and expertise provided by members of the Olympiad Working Group, teachers and RSC staff.’ Ben adds his personal congratulations to the students and also thanks the wider team: ‘Congratulations to New, Ben, Nat and Leo! I would like to thank the other members of the Olympiad Working Group, and the University of Nottingham and University College London for hosting team training events.’

Chloe Francis, RSC coordinator of the UK Chemistry Olympiad celebrates the students’ success, saying ‘Congratulations to the UK team on their wonderful achievements.’ She also thanks those who worked behind the scenes to ensure the IChO was a great success: ‘We’re very grateful to staff at the National Mathematics and Science College for hosting the UK team during the remote final, as well as University College London and the University of Nottingham for hosting training events for the students.’