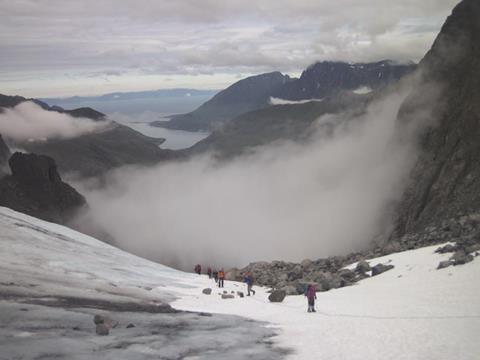 High on a glacier in north-east Norway…

Not all chemists wear white coats. Some wear crampons and glacier goggles and tramp around remote hillsides with a camera, notebook, sample vial, pH paper, penknife and battery-powered air pump in their backpacks along with essentials for several weeks of wild camping.

There are still remote places in the world to explore and investigate with science. You may picture Captain Scott or other bearded men from the heroic age of exploration and science and think that was a bygone era. But new discoveries are still being made, and we are still best able to learn about our environment by sampling and testing it. If you are tired of sitting in a classroom and preparing for exams and want to see what field scientists do, why not join a science expedition with British Exploring? If you have a keen sense of adventure and a thirst for knowledge, you might discover a passion for understanding the Earth and its environment.

Last summer, 60 ‘young explorers’ (aged 16–20), 14 leaders and 12 trainee leaders took part in an expedition to Arctic Norway with British Exploring (BE, formerly British Schools Exploring Society, BSES). The party was divided into five groups concentrating on specific science topics, linked to the expertise of the science leaders. They carried out research in that discipline as they travelled around the area on foot, setting up camps as they went. As an environmental chemist working for the UK National Centre for Atmospheric Science, I led the ‘atmospheric’ group, along with an atmospheric physicist (and science teacher). We were trying to bring together a story about the weather and how pollution is transported to the area; to carry out an environmental investigation of this fragile remote environment; and to have a good old-fashioned adventure along the way.

Our experiments were designed to be portable and easily carried from base camp to our many campsites around the area – including up on the ice cap, over 1000 m above the fjords, and past fields of crevasses (deep cracks in the ice). Improvisation is the name of the game in these remote areas, so we made use of any opportunity to monitor environmental variables as we moved through the changing terrain. The young explorers quickly developed useful skills, like always having a bottle to hand to take samples for analysis back at camp, along with a notebook and camera to log the location. We wanted to merge environmental chemistry monitoring with a feeling of environmental responsibility, a ‘leave no trace’ ethic and also an awe and respect for nature, while living in this wilderness under the midnight sun.

Lab in a backpack 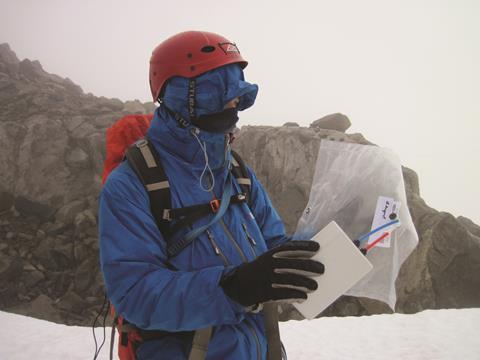 We carried out many tests on the water in the numerous lakes, rivers and streams, using water quality testing kits that revealed pH, as well as concentrations of sulfates, nitrates and nitrites, phosphates and ammonia. Comforting to us, but not a breakthrough scientifically, we found their levels to all be very close to or below the limits of what our kits could detect. The pH was also at a safe level, between 5.5 and 6.5, much less acidic than during the acid rain scare a couple of decades ago in Scandinavia. Comparing our results with past measurements from a nearby monitoring station showed how pollutant levels in rainwater and in the lakes, streams and soils have been dropping since the late 1980s.

We also tested so-called ‘natural’ cosmetic products – such as organic laundry soap and toothpaste – and compared them with some chemically manufactured soaps. The results showed us why we should be using these natural products in the wilderness, as the non-organic versions tested much higher in nitrates and made the water considerably alkaline, while the natural products did not affect the pH.

On the ice cap

Leaving the lush green valleys and boulder-strewn mountain ridges behind for the snow fields and ice on the Øksfjordjøkelen glacier was always exciting and an extra challenge to our mountaineering endeavours. It was also a chance to do some different science. We compared the gritty snow of the glacial moraine – with large amounts of rock and gravel dust covering it – with the cleaner snow of the ice cap. Passing melted snow through a filter showed the amount and size of particles on the snow surface. It was interesting to see how even the clean snow left a visible spattering of fine black particles on the filter paper. This darkening of the snow decreases the albedo (the reflectivity of the snow), which means it absorbs more sunlight, so the snow pack warms and melts more quickly.

Another interesting find (worthy of more investigations) was algae growing in channels and narrow funnels, where the dissolved nutrients in the meltwater drain off the ice cap. We first noticed them as very localised pink patches. The colour comes from a carotenoid chemical – similar to the compounds that colour carrots or tomatoes – which the algae produce to protect themselves against the high levels of visible and ultraviolet light that bear down on the ice cap 24 hours a day in spring and summer. Filtering this snow showed us these tiny red algae and the presence of other bugs (even mosquitoes). We later found out that the local reindeer were very keen on licking the ice for some extra nutrients.

What’s in the balloon?

Separating and analysing all the different greenhouse gases in these arctic air samples is done by gas chromatography. The mixture of gases is fed into one end of a long glass tube, lined with a material that sticks to some of the gas molecules better than others. An unreactive gas like helium is pumped down the tube, carrying the sample gases with it. As they travel along the column, the gases are separated out according to how strongly they stick to the lining. The ones that stick least well come out the other end first, and can be fed into other instruments for further analysis. For example, a mass spectrometer can weigh the molecules very accurately and determine the ratio of methane with 14C in it to that with normal 12C.

Throughout the expedition we carried out meteorological observations every morning and pumped samples of air into special plastic bags that were sent for greenhouse gas analysis using gas chromatography at Royal Holloway, University of London, UK. Investigating the ever-increasing methane levels in the Arctic helps us to understand its sources and the release mechanisms. Tracking the 14C isotope levels in the methane also gives us a clue to its source. A long term greenhouse gas monitoring station is being set up on the coast nearby and while we were sampling, other scientists were taking air samples from an aircraft that was flying between Sweden, Finland and the Norwegian island Svalbard, so our daily ground-based samples have been a useful addition to their database.

Carrying the battery powered pump up many a mountain was source of great hilarity. For the good of science, we whipped it out every morning – come rain or shine – then carried three or four of the two litre air sample bags back to base camp after each excursion, strapped to the science leader’s already overflowing backpack.

Other experiments involved measuring ozone with ‘Eco Badge’ test cards, which show the one hour and eight hour average ozone exposure (again, all showing very low levels). We also set up a British Antarctic Survey ozonesonde probe, designed to be released from helium balloons in Antarctica. The students saw the use and running of small scale measuring devices, some purpose-built and some commercial, all able to measure meteorological and atmospheric chemistry. 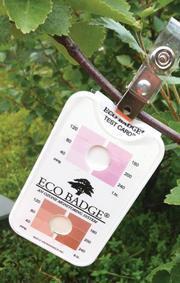 These ‘Eco Badge’ test cards measure ozone exposure, a major component of air pollution. Ozone is created by sunlight reacting with the nitrogen oxides emitted by cars and industry.

In combination with the glaciology, geology, marine biology and geomorphology science groups on the expedition, we worked on a river flow monitoring experiment on the outflow valley from the glacier. We measured the temperature and flow rates from all the tributaries joining the river from the surrounding slopes and ridges. This was a mighty task, showing the immense quantities of water rushing down the steep valley sides and groundwater channels in the area. Wherever we could, we tried to overlap the science themes to give our young explorers a sense of how earth system science is a real mix of chemistry, physics, biology, geology and geography.

If you are interested in joining a British Exploring project next year, either as a young explorer in the summer holidays, as a gap year project, a university science expedition or as a trainee leader (if you are 18 or over) then check out their wide variety of trips to Norway, the Himalaya, Iceland and the deserts of Oman. If you sign up early, you can find out more in the training weekends that prepare you for the big expedition. Young explorers are helped and encouraged to come up with original ideas for fundraising for the trip and are given some pre-expedition training. The society has left a legacy of science projects in remote areas around the world, and has worked with many scientists to bring back good quality data, so if you know any keen scientists to collaborate with, the society would love to hear from you too. They would also welcome any keen science teachers to apply as leaders.

We would like to thank the RSC International Year of Chemistry (IYC) funding to the Environmental Chemistry Group (ECG) that paid for the instrumentation used on the field trip and British Exploring for some fantastic experiences for the leaders and young explorers. I would also like to thank my fellow leader Sean Crane and the young scientists themselves.

Zoë Fleming is an atmospheric chemist at the National Centre for Atmospheric Science, University of Leicester, UK