What are unit cells?

While crystal unit cells have featured in past Olympiad papers, the topic is often less familiar to students at the time they take part in the competition. This explainer provides an introduction to unit cells in crystalline solids to consolidate students’ understanding of the key ideas.

Students read the introduction, before taking a look at a worked example of a past Olympiad question on the topic. They then have a go at answering a past question themselves, before checking their answers.

You can download the unit cells explainer as a PDF using the following link. The introduction to the topic is also reproduced below.

In ionic crystals, such as sodium chloride, the particles are ions held in a lattice structure by strong electrostatic forces of attraction between the oppositely charged ions.

A unit cell is the smallest unit that when stacked together repeatedly without any gaps can reproduce the entire crystal.

The unit cell for sodium chloride is shown in figure 1. In figure 1a the green and red spheres represent the centre of the Cl– and Na+ ions respectively. Figure 1b provides a more realistic representation with the sodium and chloride ions touching each other along the cell edges. 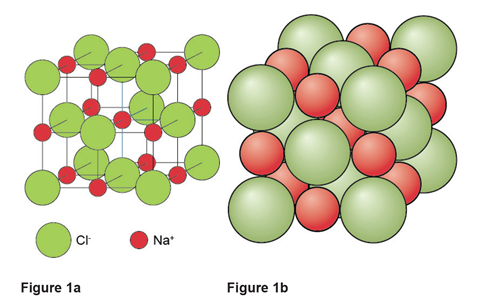 In both these representations of the unit cell it is important to note that the whole particle is not necessarily in the unit cell. A particle at a corner or on a face or an edge is shared by neighbouring unit cells so in a crystal only a fraction of it belongs to the unit cell in question:

Knowing the numbers of each particle within a unit cell it is then possible to calculate other properties of the crystal.