Hand warmers containing a liquid in a flexible plastic shell with a small, curved metal disc are commonplace. The warmer is activated by inverting the disc, which presents nuclei to support the formation of crystals from a supersaturated solution. Needles propagate out from the nucleation site and within a matter of seconds the contents have solidified. The process is exothermic, generating heat.

This effect can be reproduced in the lab to offer more control over the process and produce attractive stalagmite formations.1 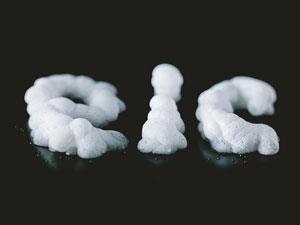 Weigh 125 g of the sodium ethanoate into the beaker and add 12.5 cm3 of water. Place the beaker onto a tripod and gauze over a Bunsen burner and heat gently, stirring until the solid has completely dissolved. Place the watch glass over the top of the beaker to minimise evaporation and prevent dust particles getting in, which can nucleate the solution prematurely. Allow the solution to cool to room temperature.

The process happens so quickly that if you are holding the spout of your beaker near the watch glass in an attempt to pour accurately, you can find that the crystals will race back up the drip to the spout, causing your stock solution to crystallise in the beaker.

A small Pyrex reagent bottle with a screw cap could be used instead of a beaker to store your solution. This is a more convenient way to store the solution over long periods and the contents can easily be redissolved by placing in a boiling water bath with the cap removed.

I use this demonstration when developing students' ideas of particle models, particularly with respect to heating and cooling curves and changes of state. While the demonstration is technically crystallisation from a supersaturated solution, it is useful as a model for freezing. There are many videos on YouTube showing the freezing of supercooled water but it is not trivial to produce a sample on demand for use in front of a class,2  so this demonstration provides a suitable alternative.

The key idea to stress here is that bond formation is an exothermic process. Many students will think that as a liquid turns to a solid it will get cooler because 'ice is colder than water'. With a clearer idea of the energy changes involved, they are in a better position to explain why pure substances do not change temperature during a change of state.

The nucleation concept does not appear on science curricula but there are plenty of associated phenomena suitable for exploration in a science club.

The nucleation of bubbles of dissolved gas can be demonstrated by the addition of raisins to carbonated water that proceed to 'dance' up and down as bubbles form and release from their surface. Despite being less dramatic than the Mentos/cola fountain, at this scale it is clearer to see that as the raisins are dropped in, they trap bubbles of air on their surface and these established bubbles are easier to enlarge with dissolved gas than initiating a new smaller bubble. The formation of streams of bubbles in champagne flutes also presents a particularly elegant way to examine this process. The use of champagne here is optional!

This resistance to the formation of small bubbles explains the 'bumping' seen in liquids heated in organic practical work and stories of scalds received from sticking a spoon into liquids superheated in household microwave ovens.

2  Peter Wothers was able to show this in front of a live audience only with the help of some assistants at the 2012 Royal Institution Christmas Lectures. The demonstration of supercooled water can be seen at http://bit.ly/12RcTvR, starting at 07:40.