Declan Fleming presents an experiment to illustrate the electrochemistry of rusting

Most courses studied by 16–18 year olds require them to be familiar with the process of rusting from an electrochemical perspective. However, many rusting demonstrations take a long time to produce any results without providing much information about the various electrochemical processes occurring. The use of phenolphthalein and hexacyanoferrate(III) as indicators is a rapid and great way to infer the presence of the various ions that form during rusting. 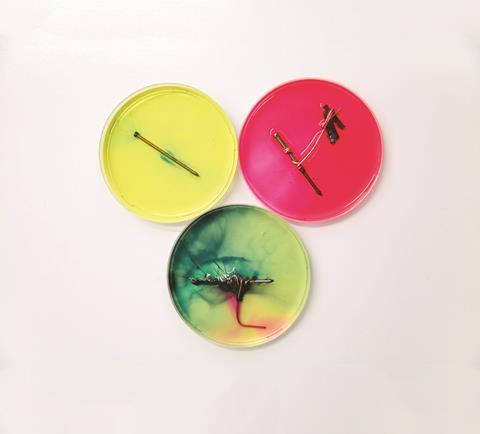 Work in the location of the demonstration where possible to minimise the movement of the liquid. To 100 cm3 of tap water, add half a spatula (about 0.2 g) of potassium hexacyanoferrate(III), eight drops of phenolphthalein indicator solution and (optionally) a microspatula of sodium chloride (0.05 g) to accelerate the process a little.

Shake or stir the solution to aerate and then distribute it among four empty petri dishes to a depth sufficient to cover the nails once added. In one of the dishes, dissolve a further half a spatula of sodium chloride (about 0.2 g). Leave for a few minutes to allow the liquids to settle – in this time you can prepare the nails.

Wrap the centre of one nail with a strip of magnesium ribbon and the centre of a second with a copper strip or wire. You may wish to crimp these both slightly with pliers to improve electrical contact between the metals. Note that copper wire kept in schools often appears uninsulated while still being covered with a thin insulating layer; this can be scratched off by rubbing against a scissor blade or with an emery cloth.

There are many alternatives to this experiment. Try placing the iron and magnesium in separate petri dishes and connecting them using copper wire, or repeating the experiment in boiled water under oil. What happens if a nail is placed in a large droplet such that at least one end is exposed to the air?

Although it is more time-consuming to prepare, agar gel is more forgiving of movement than water. A preparation using it can be found here.

The primary objective here is for students to be able to explain the process of rusting from an electrochemical perspective.

The hydroxide ions come from the reduction of aqueous oxygen (See Standard electrode potentials, equation 4). As magnesium is a better reductant than iron or copper (equations 1–3), the pink colour formation is fastest in the case of the magnesium-modified nail. The magnesium also pushes electrons onto the iron, improving its ability to reduce water meaning the pink colour rapidly forms around the entire nail.

No blue colour is seen here because the magnesium is preferentially oxidised, preventing oxidation of Fe to Fe2+. The outcome is the same whether the iron is attached directly to the magnesium or via a wire.

The copper has the opposite effect on the iron. With iron being a better reductant than copper, electrons are pushed onto the copper and a pink colour is seen around that metal. The iron is preferentially oxidised, accelerating the oxidation of Fe to Fe3+ and therefore the blue colour (equation 5) appears around the iron. The blue appears faster and deeper here than in the salty water or control experiments.

The production of the blue colour around the nail in salty water is faster than the control due to the increased concentration of electrolyte, even though the solubility of oxygen is reduced by increased salt concentration.

Note that the depth of colour formation around these nails is not uniform. This indicates that electrons are being transferred through the nail from the site of oxidation of the metal to the site of reduction of the aqueous oxygen. Using iron nails rather than strips shows how the shaping of the metal locally increases the free energy of the iron and as such, the blue colour is often deepest around the tip of the nail.

Wear eye protection. All liquids can be washed down the sink with plenty of water. Indicator solutions are likely made with industrial denatured alcohol (IDA). IDA is also an eye irritant, harmful by ingestion and causes damage on repeated or prolonged exposure to the optic nerve, CNS (and some other organs). Potassium hexacyanoferrate (III) is a skin/eye irritant, harmful by ingestion (and perhaps skin contact), harmful if inhaled/respiratory irritant, releases toxic gases in contact with acid.