How scientists are taking the fight to this deadly gas

Carbon monoxide gas is known as the silent killer. ‘You can’t smell it, you can’t taste it and you can’t see it,’ explains Christopher Morris, a toxicologist at Newcastle University. In addition, it causes rather nondescript symptoms, such as headaches, tiredness and nausea, which can make a diagnosis difficult. Each year, about 60 people die from accidental carbon monoxide poisoning in England and Wales. Many more suffer with less serious effects of inhalation: an estimated 4000 people are treated annually for carbon monoxide poisoning in accident and emergency departments across England. 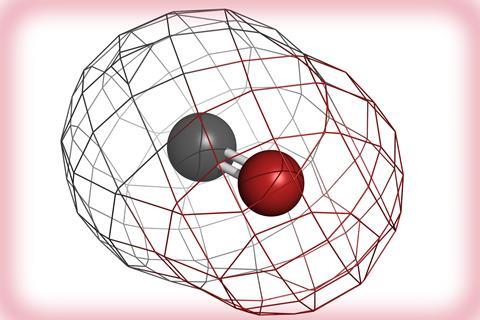 Carbon monoxide is produced during the incomplete combustion of natural gas and other fossil fuels. Improperly installed or poorly maintained central heating boilers, cookers and heaters are the most common causes of carbon monoxide poisoning in UK homes.

Carbon monoxide kills by disrupting the oxygen supply within the body. The average adult has about five litres of blood circulating around their body. Blood has four main components – red blood cells, white blood cells, plasma and platelets. The red blood cells transport oxygen from the lungs to the cells and tissues that need it. Haemoglobin in the red blood cells carries out this transportation role. In the lungs, oxygen binds to this iron-containing protein complex to form oxyhaemoglobin. When it arrives at its destination, the oxygen is released and the haemoglobin is transported back to the lungs where it collects more oxygen.

Make cross-curricular links with environmental chemistry when teaching incomplete combustion of hydrocarbons with your 16–18 learners. Use the context of haemoglobin to reinforce applications of transition metal chemistry – in particular, complex ions and the concepts of chemical equilibrium occurring in ligand exchange – while highlighting the overlapping biology topics. Why not discuss the role of research and development in finding solutions to complex long-term health issues, such as carbon monoxide poisoning? Learners could also investigate this topic as an individual research project in qualifications such as the Extended Project Qualification (EPQ) and Advanced Skills Challenge Certificate.

When inhaled, carbon monoxide competes with oxygen in the lungs, binding with haemoglobin to form carboxyhaemoglobin. As carbon monoxide binds to haemoglobin much more tightly than oxygen, this is a harder process to reverse. Hypoxia occurs when the amount of unbound haemoglobin available to transport oxygen around the body gets too low.

Caught in the act

Carbon monoxide can be a tricky poison for medics to catch in the act, explains Christopher. When carbon monoxide poisoning is suspected, a blood test is conducted to determine the level of carboxyhaemoglobin in the blood. Occasionally, this entails the use of a breath test to measure carbon monoxide in the exhaled breath instead. As soon as patients leave their homes and stop breathing in the gas, these numbers start to go down, meaning that by the time they are tested the results may be within the normal range. Patients therefore are frequently discharged home, where they can be exposed for a second time.

Practice questions for learners to apply their understanding of bonding, redox and equilibrium in transition metal chemistry to less familiar contexts.

Christopher and his team are developing an alternative diagnostic tool to address this repeat exposure problem. They have identified a longer-lasting fingerprint of biomarkers in the white blood cells to indicate carbon monoxide poisoning. ‘We were looking for [a pattern of] telltale changes that [indicate] a cell has been exposed to carbon monoxide for a long period,’ Christopher says. Carbon monoxide enters white (as well as red) blood cells and binds with the soluble guanylate cyclase receptor – altering its normal function. This triggers a series of tiny changes within the cell leading to slight changes in the levels of various proteins.

So far, this fingerprint has only been confirmed in white blood cells exposed to carbon monoxide in a Petri dish. The next stage is to look for the same evidence in the white blood cells of exposed individuals.

As a first-line treatment for suspected carbon monoxide poisoning, patients are given 100% oxygen to breathe through a tight-fitting mask to flush the poison out of their system. For some people, this flushing process isn’t fast enough to prevent permanent damage. Carbon monoxide poisoning causes long-term complications, such as brain damage, in about 10% of cases.

Mark Gladwin – a respiratory medicine specialist and haemoglobin researcher – and his team at the University of Pittsburgh, US, are looking to develop a fast-acting antidote to boost the chances of a full recovery. ‘It’s the most common poisoning in the world and there’s no antidote,’ he explains. An antidote could be carried on ambulances and other first-response vehicles and administered at the scene of suspected severe carbon monoxide poisonings, he adds.

The antidote Mark and his team are designing is based on neuroglobin, an iron-containing protein complex with a similar structure to haemoglobin, found in the brain in low concentrations. Neuroglobin, Mark explains, has a much higher affinity for carbon monoxide than haemoglobin: ‘It’s essentially a trap, an irreversible scavenger’. The team have found that neuroglobin rapidly steals the carbon monoxide molecules from carboxyhaemoglobin in mice with induced carbon monoxide poisoning. Mark’s team is tweaking the structure of neuroglobin to improve its performance and figuring out how it could be manufactured at scale. They then plan to start trials in humans.