How many electrons can you remove from an atom? It’s more than you might think

Photolithography is the only industrial application of highly charged ions, where integrated circuit designs are ‘drawn’ on silicon wafers

One atom says to another: ‘Oh no, I’ve lost an electron’. The other replies: ‘Are you positive?’

This classic science classroom joke explains how cations form. Neutral atoms have the same number of positively charged protons in their nucleus as negatively charged electrons in their shells. ‘When you take one of the electrons out of the atom you create a cation, because then there is more positive charge than negative charge in the atom,’ explains Anna Niggas, a PhD student in Richard Wilhelm’s group at TU Wien in Austria.

Your 14–16 learners won’t often come across highly charged ions, but they should be able to apply simple addition and subtraction skills to help them navigate the numbers of sub-atomic particles involved. Use highly charged ions to test learners’ understanding of the different data provided on the periodic table by asking them to state how many protons, neutrons and electrons there are in a highly charged ion.

The number of electrons most atoms give up easily is small. For elements in groups 1 and 2 of the periodic table, it’s the electrons in the outer shell – producing ions such as Na+ and Ca2+. For transition metals, the number normally varies between one and four, creating ions such as Fe2+ and Pb4+.

In theory, however, atoms can be coaxed into surrendering all of their electrons. Ions entirely stripped of electrons – as well as those giving up a large number of electrons – are called highly charged ions.

Noble gases are the atoms of choice for most scientists looking to create highly charged ions. Anna creates Xe40+ in her lab and other physicists from Piet Schmidt’s lab at Leibniz University Hannover and Physikalisch-Technische Bundesanstalt in Germany, make Ar13+. Some heavy metal atoms can also be highly charged; examples include Fe13+ and ‘naked’ uranium, U92+.

It’s extremely difficult to expel lots of electrons from an atom. And it gets harder with each electron you remove – since the positively charged nucleus grips tighter to its remaining electrons.

Highly charged ions are produced by bombarding neutral atoms with a stream of electrons at high speeds. ‘If you’re lucky, then you will have one electron that kicks out another from the atom to create a singly charged ion,’ says Anna. These ions are then hit by more and more electrons, with each collision potentially removing another electron.

Once highly charged, these ions are very keen to get some electrons back and stopping them from doing so requires an extremely high vacuum (to ensure there is no matter around for them to take electrons from).

A logic puzzle and follow-up worksheet to test your learners’ knowledge of ions, charge and the periodic table.

Putting them to work

Highly charged ions have only one industrial application to date: photolithography for making computer chips. UV light is used in photolithography to ‘draw’ integrated circuit designs on silicon wafers. The wafer is coated with a light-sensitive plastic called a photoresist. A stencil is used to direct light on certain parts of the surface, which hardens the photoresist in these places. The still soft photoresist is then removed, leaving a hardened plastic design and exposed silicon wafer.

Recently, the Dutch semiconductor technology company ASML started using extreme ultraviolet light to make state-of-the-art semiconductors. The light is emitted from highly charged tin (Sn12+) ions in plasma. ‘The latest version of ASML’s wafer stepper includes an Sn12+ highly charged ion source for generating light at 13.5 nm. Without highly charged ions, we would not get the next generation of our smartphones or computers!’ says Piet. 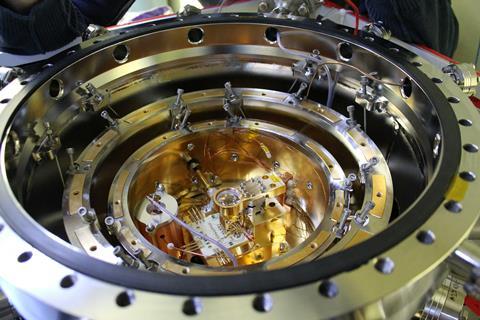 Atomic clocks provide exceptionally accurate timekeeping with uses including synchronising the internet and GPS navigation. Today, microwave atomic clocks are mostly used, but even more precise optical atomic clocks are expected to replace them in the future.

‘The most accurate optical atomic clocks in use today are based on atoms that are either neutral or singly charged,’ says Piet. His group is looking to improve these using highly charged ions which, he says, could be used to measure time even more precisely. There is, however, a downside: the nature of highly charged ions means these clocks will never leave the laboratory.

Piet’s lab is currently using an optical atomic clock containing highly charged ions to probe dark matter. About 85% of all matter is thought to be dark matter, but we don’t know much about it since it does not emit, reflect or absorb light.

Understanding dark matter is just the tip of the iceberg when it comes to what highly charged ions can offer scientists. ‘It’s a fundamental playground,’ says Daniel Primetzhofer, a physics professor at Uppsala University.

Some physicists are using them as a tool to improve understanding of the behaviour of ‘normal’ ions, used for a wide range of industrial purposes. Manufacturing semiconductor devices, for example, involves firing ions at surfaces – a process known as ion implantation. Understanding how these ions behave during surface collisions should allow their industrial use to be optimised.

Further insights into the ions used in cancer treatments and those naturally present in space radiation would also be helpful. ‘We are interested in how charged particles alter our spacecrafts and if we want to send people to Mars we have to understand what happens to their bodies,’ says Daniel.

Highly charged ions can be observed more easily than normal ions because much more energy is released when they strike a surface. Highly charged ions act like hand grenades, releasing lots of energy as they rapidly capture any electrons they can from the environment around them, explains Daniel. ‘They do the same stuff as regular ions, but in a much more extreme way, which often makes it easy to observe,’ he adds.

Nina Notman is a freelance science writer and editor specialising in chemistry. Resource by Kirsty Patterson