We all eat salt, but what is it, where does it come from and why is too much bad for you? 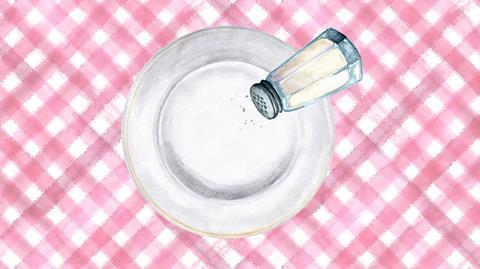 On television, in newspapers, magazines and online, you’re bound to come across news articles on what constitutes a healthy diet and salt is often named as the villain of the piece. Our bodies need salt to function properly but research has shown that most of us consume too much and that over-consumption on a global scale is leading to a range of health problems.

Common table salt is sodium chloride. Drop sodium – a soft light metal – into water and it explodes, and chlorine is a pale green poisonous gas, but combined together, they form the edible white crystals we love to sprinkle on our chips with a little vinegar to make them taste good.

‘Salt tastes good as it is picked up by receptors on the tongue,’ explains specialist paediatric dietitian Clare Thornton-Wood. The receptors are found inside the thousands of taste buds on the tongue and they detect five different flavour types: salty, sweet, sour, bitter and umami (or savoury). It’s not just the salt receptors that detect salt – sweet and umami receptors, for example, also pick it up, which enhances their flavours too. Also, ‘salt blocks bitter and sour flavours, which is why it’s often added to foods to make them more palatable,’ says Clare.

The article contains much of scientific interest and bridges chemistry and biology. It also contains a discussion of how the science could affect a person’s lifestyle choices, and teachers should pursue such discussions with students where possible. Curriculum areas covered include chemistry fundamentals (elements, compounds, properties), lifestyle and disease, separation techniques, acids and alkalis, circulatory system, and how science works.

The salt in our food comes from under the ground, which we get by solution mining, and from seawater, which is obtained by brine evaporation. With solution mining (the most common method), water is pumped into underground rock salt deposits to create brine, which is pumped to the surface. Purification steps remove magnesium, sulfate and calcium carbonate impurities from the brine, which is then evaporated in large vessels to leave the salt.

Salt in the body

Salt is an electrolyte that aids water transportation around the body and sends messages between the brain and the rest of the body, for example to the muscles and nerves. It maintains the correct amount of water – the fluid balance – in our bodies too. ‘Salt stimulates our desire for water to maintain this fluid balance, which is why salty snacks are put out in restaurants to encourage people to buy more drinks,’ explains Clare.

But, eating too much can lead to too much water being retained in the body, which raises the blood pressure. Raised blood pressure can damage the arteries, which are important for carrying oxygenated blood to the heart, and lead to narrowing and hardening of the arteries by fatty deposits called plaques. The ultimate result is the risk of a heart attack, kidney disease and stroke.

Do you want salt on that?

The questions in this worksheet approach the topic of salt from a number of different scientific angles. The worksheet is broken into sections.

Section 2 deals with separation techniques. Students will have to be familiar with solute/solvent/solution terminology as well as filtration.

Section 3 is more of a research task, where students can use the internet to find information about their own diet. By this point they should be able to think about better decisions that can be made about their diet.

‘We know that in the UK, most adults are consuming at least 8 g a day,’ says Clare, with most of the salt intake coming from processed foods such as soups, sauces, pies and pizza. ‘Take a really good look at pizza – there is a huge difference between them. Pepperoni ones have the highest amount.’

Salt is not only found in savoury products but also in sweet foods as it enhances their flavour – salted caramel is very popular, for example. It can be ‘hidden’ in foods where it is not expected such as cakes, biscuits and even in some medicines.

‘Perhaps surprisingly, two big contributors are bread and breakfast cereals. A slice of bread can contain 0.5–1 g of salt.’ Clare’s advice is not to avoid eating bread and cereals, but to keep the salt quantities in mind.

Food companies are reducing salt levels in their products and offering low-salt alternatives. Premier Foods, whose brands include SAXA table salt, has introduced a low-salt option called So-Low, which contains 50% less sodium than table salt. They have been working with the government to reduce the amount of salt added to their cooking sauces, baking goods, pasta, noodles and rice.

As healthier alternatives to salt when cooking at home, Clare recommends adding herbs and spices to sauces, and lemon juice to vegetables. ‘It may take a short time for your taste buds to acclimatise, but you’ll soon find salty foods too salty,’ she says. She also advises cutting down on processed foods, such as pizza, crisps, salami, bacon and cereals, and reading labels on food packages that show the amounts of salt in the food. ‘By law, all food items have to show nutritional information on the label. The traffic light labelling system adopted on most products will show salt content in red if it is high.’

Use a classic demonstration from the Royal Society of Chemistry to show students the formation of sodium chloride from sodium and chlorine. Adding a little damp sand to the bottom of the measuring cylinder will enable the reaction to get started but also protect the measuring cylinder’s base from breaking as a result of the energetic reaction: bit.ly/2LM8JH8

Use this classic demonstration to show your students the formation of sodium chloride from sodium and chlorine. Adding a little damp sand to the bottom of the measuring cylinder will enable the reaction to get started but also protect the measuring cylinder’s base from breaking as a result of the energetic reaction.

Challenge students to decide on the least salty crisps with this experiment from Learn Chemistry: rsc.li/2En1OOL

Challenge students to decide on the least salty crisps with this experiment from Learn Chemistry.

The Salt Association’s website has a range of materials for science teaching: bit.ly/2JJI1wn

The Salt Association’s website has a range of materials for science teaching.

Article by Elinor Hughes, a science writer based in Bridgend. Resources by Adam Boxer, a teacher at the Jewish Community Secondary School