I ‘heart’ my smartwatch

How wearable tech uses chemistry to help monitor your health 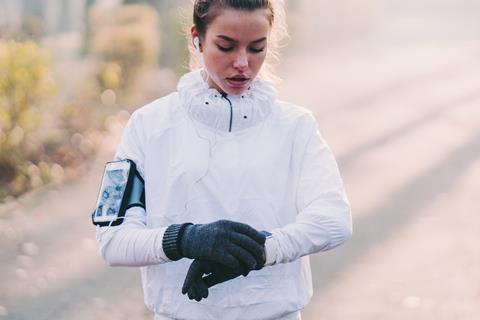 Personal fitness monitoring is a multibillion pound industry. It is now widely accepted that your resting heart rate (RHR) is a decent indicator of changes to your cardiovascular fitness. For instance, a decline in RHR over several weeks of exercise indicates that your heart has become more efficient at pumping blood and oxygen around your body.

Modern wearable devices such as smartwatches allow you to monitor this progression over time, as well as other metrics related to your general health. The devices work by taking advantage of several core biological and chemical concepts common to everyone.

Spectroscopy in smart tech is a relatable context for students. Bring it closer by combining a smartphone with kitchen cupboard ingredients to investigate how transmission of light changes with colour and concentration in blackcurrant squash. This activity is just as effective in the school lab as it is at home, making it a great activity for remote learning. It is suitable to complete at any age, while 16–18 students can use their results to plot a graph and manipulate logarithmic equations to find the concentration of an unknown dilution of squash. 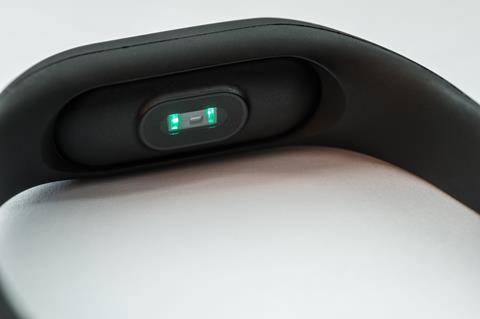 Giving it the green light: the flashing green light of a smartwatch measures your heart rate

Modern smartwatches use a flashing green light to measure your heart rate from your wrist. Spectroscopy tells us that blood absorbs green light because red and green are opposite each other on the colour wheel. The rear of the smartwatch contains an optical sensor to detect the reflected light. The main difference from spectrometers is that the light source and detector are positioned on the same side in smartwatches, while they are opposite each other in spectrometers. The layout used in smartwatches can result in lower accuracy compared to spectrometers because the detector is entirely dependent on the amount of light reflected from the sample, ie your blood.

Use a smartphone to investigate absorption of coloured light in different concentrations of diluted blackcurrant squash. Apply the Beer–Lambert law through calculations and analysis to find the concentration of an unknown dilution of squash using graphical methods. The activity also introduces students to equations and allows them to practise drawing straight line graphs. Download the instructions as MS Word or pdf.

A practical and follow-up analysis activity using a smartphone to investigate absorption of coloured light in different concentrations of diluted blackcurrant squash from the Education in Chemistry website: LINK.

The newest devices and software use advanced algorithms to monitor pulse rate data and detect issues such as atrial fibrillation (irregular heartbeat). The accuracy and reliability of the algorithms for regular health monitoring is still under investigation though, mainly due to variations that could be caused by different skin pigmentations. A recent large-scale study found that more than a third of participants who were notified of an irregular pulse by their smartwatch had atrial fibrillation.

The newest devices and software use advanced algorithms to monitor pulse rate data and detect issues such as atrial fibrillation (irregular heartbeat). The accuracy and reliability of the algorithms for regular health monitoring is still under investigation though, mainly due to variations that could be caused by different skin pigmentations. A recent large-scale study (bit.ly/3nyyLeE) found that more than a third of participants who were notified of an irregular pulse by their smartwatch had atrial fibrillation.

Recent advances in battery technology have allowed for more sensors and a higher degree of accuracy in wearables. Valeria Nicolosi, expert in nanomaterials and energy storage and a professor at Trinity College Dublin, says: ‘there are lots of very cool things the battery and materials science fields are working on which will revolutionise this technology. The next generation of batteries are far more efficient and will support monitoring on a much finer scale.’

In the near future, there will be no reason to wear a smartwatch as we will be able to have clothes with seamlessly embedded sensors

Oxygen saturation (SpO2) – the percentage of haemoglobin bound to oxygen in your blood – is the latest metric to arrive in wearables thanks to more efficient power use. It has risen in prominence during the Covid-19 pandemic because one of the many puzzling aspects of the disease is that is causes silent hypoxia, a condition where oxygen levels in the body drop abnormally low without patients showing signs of respiratory distress. The most accurate way to measure SpO2 is to test a blood sample, but pulse oximetry is the more common method used by health professionals. It involves placing an optical device on a finger or ear lobe and, like optical heart rate monitoring, this device forces light through the skin towards a detector.

Turning back the clock

The electronic heart rate monitor has been around since the early 1970s, but it took another decade for the technology to advance enough for regular use by athletes. The first wearable device appeared in the form of a chest strap that transmitted live electrocardiogram (ECG) signals of a person’s heart rate to a nearby data receiver. This was followed up in the early 1980s with the first software for analysing heart rates to detect changes and irregularities over time.

The first watches that could measure heart rate using an optical sensor appeared in the late 1980s. More advanced watches, with the ability to measure blood pressure using electrical signals, appeared in the 1990s.

Unlike optical heart rate monitoring though, pulse oximetry uses two light sources: red and infrared (IR). This is because oxygenated haemoglobin absorbs IR light and allows red light to pass through, whereas deoxygenated haemoglobin allows IR light to pass through and absorbs red light. The newest generation of smartwatches measure SpO2 using pulse oximetry by calculating the difference between IR and red light absorption taken from your wrist. Pulse oximetry has become particularly relevant for detecting sleep apnoea, a disorder that if left untreated could lead to high blood pressure and other health conditions.

The use of spectroscopy in personal fitness monitoring has progressed rapidly over the past decade. Technological advancements and miniaturisation have even put optical heart rate monitors into a ring that you can wear on your finger. Based on recent advances in materials science, Valeria predicts the next generation of fitness wearables may even take the form of smart clothing: ‘In the near future, there will be no reason to wear a smartwatch as we will be able to have clothes with seamlessly embedded sensors.’

Fitness wearables have evolved far beyond their origins of measuring your heart rate at a specific moment. In addition to new sensors and battery technology for measuring health metrics, software algorithms have also advanced significantly to interpret all the data that your wearable is measuring. As a result, accuracy is continually improving and wearable technology could eventually become hugely important in the early detection of health abnormalities.