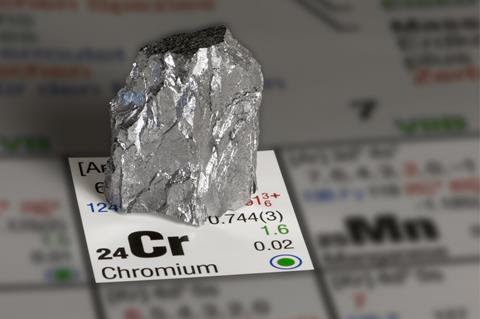 The fourth idea in our series is that chromium displays an anomalous configuration – [Ar] 3d5 4s1 – because of the stability of its half-filled sub-shell. Many chemistry textbook authors make this claim. My response is that there is nothing intrinsically stable about half-filled shells or sub-shells and that this is an ad hoc notion that should be abandoned. After all, why should the possession of a half-filled sub-shell confer any additional stability? What principle of physics is supposed to justify such a claim?

As a matter of fact, there is no such justification and it is just another myth that seems to be embraced by many chemical educators. As in the case of my article about the concept of pH 7 being neutral, there is the implication that having a half-filled sub-shell is somehow both necessary and sufficient for an atom to display an anomalous configuration.

There is a lack of any direct causal link in both directions. Possessing half-filled sub-shells is neither sufficient nor necessary for there to be an anomalous configuration in any particular case.

A song and dance

All that does exist is the coincidence that two atoms, namely chromium and molybdenum, among eleven atoms with anomalous configurations in the d-block, happen to display both attributes. Why then do chemical educators continue to make such a song and dance out of half-filled sub-shell stability in this context?

Students still need an explanation for the anomalous configuration in atoms such as chromium. I suggest that given the choice between the following configurations – [Ar] 3d5 4s1 and [Ar] 3d4 4s2– the first of these is observed because it is more stable overall.  Better still, the second of these options is less stable because of the additional electron–electron repulsion between the two electrons in the 4s orbital. So, rather than falsely implying that there is something intrinsically stable about the half-filled sub-shell configuration, it is more accurate to say that this configuration occurs by default since the other option represents a less stable arrangement of electrons.

The careful reader will note an apparent contradiction with what was stated in the previous entry about atoms such as scandium that favour having two electrons in the 4s orbital in order to achieve maximum stability. But each atom must be considered on its own terms. If anything, this emphasises the fact that simple general rules concerning electronic configurations frequently break down.

A fuller explanation of why s1 configurations ever occur in preference to the more typical s2 configurations can be found, again, in the work of Eugen Schwarz who has done so much to clarify the 4s 3d question.1

Eric Scerri is an author and chemistry lecturer at the University of California, Los Angeles