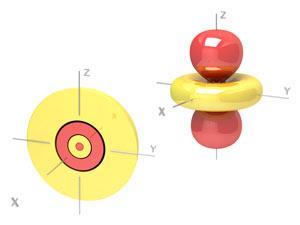 The third idea in our series is the notion that 4s atomic orbitals are preferentially occupied and preferentially ionised with respect to 3d orbitals in transition metal atoms. This idea is extremely pervasive even though it has occasionally been corrected in scientific and chemistry education literature.1 As many chemistry students are quick to realise, the notion that 4s orbitals are preferentially occupied and also ionised makes little sense since the preferential occupation of 4s orbitals seems to suggest that the electrons falling into these orbitals should not be the first to be ionised.

The relative occupation of orbitals, just like the opposite energetic process of ionisation, is governed by the stability of atoms. If the 3d electrons are the last to enter the atom, students correctly reason that they should be the first to depart when ionisation energies are considered. But the experimental ionisation energies for transition metal atoms show unequivocally that it is the 4s electrons, or the ns electrons if we consider the transition metals in general, that are the first to be removed. Textbook authors and instructors react to this apparent conundrum by appealing to all kinds of contorted arguments that are intended to pacify students and lead them to think that the solution lies in the higher reaches of quantum mechanics, which are beyond their level of understanding.2

There are some plausible reasons why this view persists. One factor is that in the case of potassium and calcium atoms, the 4s orbitals are genuinely preferentially occupied. But for these two atoms, the question of the relative occupation and ionisation of 4s and 3d orbitals does not even arise for the simple reason that there are no 3d electrons present. Also, it would seem natural to suppose that the configuration of scandium should consist of what already exists in the calcium atom plus an additional electron, which we might expect to enter a 3d orbital. But this view is incorrect.

What should be done in every case is to consider the relative order in the energies of all the orbitals for each particular atom in question. In the case of the scandium atom, the relevant ordering is that the energy of the 3d orbitals falls below that of the 4s. Consequently, it is the 3d orbitals that are preferentially occupied, contrary to what is stated in 99% of textbooks.3 The 4s orbital is occupied last, in terms of an energetic order, and consequently, it is perfectly consistent that it should also be preferentially ionised when the reverse energetic process is considered. The initial student intuition turns out to have been correct. If 4s fills first, it cannot possibly also ionise first.

But there is one remaining problem to solve. As mentioned, the 3d orbitals have energies lower than those of 4s for the metals in the first transition series. So why is the configuration of scandium [Ar] 3d1 4s2, instead of [Ar] 3d3? The answer to this puzzle is that the final two electrons that enter the scandium atom can experience less electron–electron repulsion by making their way into the larger, more diffuse 4s orbital. This arrangement is more stable. Despite this, the fact remains that 3d fills before 4s and 4s ionises preferentially. Or, more generally, experimental evidence for transition metals from any of the first three series points to the preferential occupation of (n– 1)d orbitals and the preferential ionisation of the corresponding n s orbital.