Cave paintings and drawings were the first uses of art in prehistoric times. Here we look at the these artistic interpretations of the world by Homo sapiens. 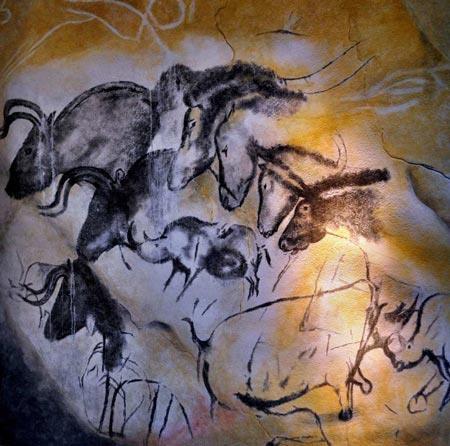 We call this cave art. It was painted on the walls of caves in Europe and in Asia during the Palaeolithic Period some 325 million to 10,000 years ago. To make it easier to talk about events the period is broken up into three periods.

The Palaeolithic period and humans

The first is the Lower Palaeolithic. It was dominated by a number of human-type people and later by the Neanderthals. Then around 300,000 years ago, we call this the Middle Palaeolithic followed by the Upper Palaeolithic (Table 1).

The Upper Palaeolithic Period is very different from the Middle and Lower periods. People look different and the culture (ideas, customs, and social behaviour) of the people are different. Over the different periods humans were generally hunter-gathers who used tools and fire, and from the Lower period onwards they seem to have buried their dead.

Differences between Neanderthals and Homo sapiens

It would be wrong to try and explain the success of Homo sapiens in the Upper Palaeolithic by thinking that they were more intelligent than the Neanderthals (Homo neanderthalensis) of the Lower and Middle Periods.

Maybe it was the development of language, since it is clear from the evidence that Neanderthals were tool-makers and lived in groups. It’s not clear if they had a language but their brains were approximately the same size as Homo sapiens. 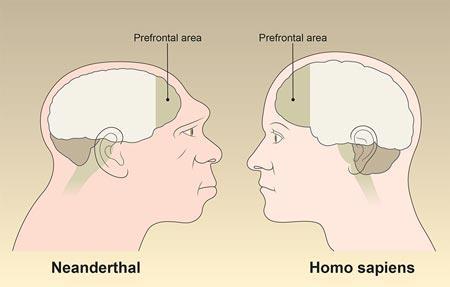 Comparison of size of prefrontal cortex of Neanderthals and Homo sapiens

Studies of the brains capacity and structure imprint on the skull to determine brain organisation by Dunbar and Pearce (2013 Science Daily) have suggested that it is possible Neanderthals could have produced other things besides tools. In fact Neanderthals brain development indicates an increased development in the sensory especially vision and motor centres, primarily in the rear half of the brain. Homosapiens show a different type of development, primarily in the frontal lobes. These are the higher thinking centres of the brain, and indicate a development in speech, imagination, and ethics centres.

It is clear that one difference is that the Upper Palaeolithic people produced complex communication and art. Even in this area though there needs to be care, and the complexity of this research area can be illustrated by the Makapansgat cobble from South Africa.

This cobble is a reddish jasper (silicate mineral containing iron oxide) stone which appears to have the shape of a head. It seems to have been carved with distinctive ‘staring eyes’ and a ‘mouth’. Firstly we know that jasper could not have occurred naturally in the dolomite cave where it was found, so it must have been carried there.

Secondly, the markings do not appear to be natural they bear all the impressions of having been carved. 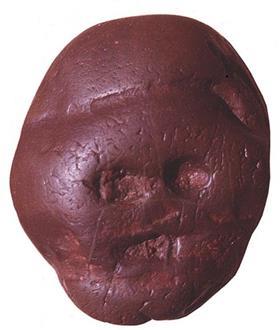 Thirdly, because of the place it was found in and the materials around it, it has been suggested that it was deposited in the cave by Australopithecus africanus. They were dominant in the Lower Palaeolithic Period almost 3 million years ago. [i] That is a long time before Homo neanderthalensis let alone Homo sapiens.

Bednarik who studied this cobble claims that, sometime around 850,000 years ago, the people of the Lower Palaeolithic were engaged in behaviour which could be interpreted as ‘art’. Evidence shows they decorated themselves with beads, collected exotic stones and there is evidence of the collection and use of ochre as a decoration.

More substantial evidence of this spiritual character, that could have led to cave art, is burials from the Lower Palaeolithic period about 350,000 years ago. These burials contain grave goods and the people used colour on their bodies in the form of tattoos.

These tattoos are drawn using such minerals as ochre, manganese oxide or charcoal. Later they painted on cave walls using lines, circles and V markings. It is later in the Upper Palaeolithic period that there is the appearance of carved anthropomorphic (animal and human) images with strange symbols and marks and the creation of cave paintings.

All this evidence would suggest Palaeolithic humans had begun to believe in supernatural or spiritual beings early on. [ii] Indeed, Lewis-Williams [iii] argues this behaviour has its evolutionary origins in Africa as a factor of human consciousness.

The Importance of cave art and human development

It can be argued that we have always collected things and doodled, so how is that connected to the cave paintings?

Archaeologists argue that collecting is connected to ritual (a series of actions performed according to a prescribed order) and that is an indicator of a belief system or religious behaviour. So ritual and religion is an essential mark of modern human behaviour. It has been said that it displays the emergence of the modern mind.

From the evidence available it is assumed that this aspect of human behaviour emerged around 40 - 50,000 years ago. If that is true, it‘s the transition from the Middle to Upper Palaeolithic period and the advent of the modern human.

Cave painting is considered one of the first expressions of the human animal’s appreciation of beauty and a representation of a mystic or sacred side to life. Hundreds of images of animals in vibrant colour and striking poses of action can be seen in the prehistoric art gallery on rocks worldwide. There are many examples in France and Spain.

These cave wall paintings are known as pictographs and are found all over the world alongside petroglyphs (the incised, pecked or cut designs on rock surfaces).

Cave drawings are they art?

In fact art is a Middle English word coming from the Latin ars (skill or technique). The first use of the word art was when it was used to show a mark of human achievement in the early universities and that exists today in the Bachelor of Arts (BA) or Master of Art (MA) awarded by universities.

Yet, art is more than a skill or technique. It has a purpose going beyond making something. Any connection with our modern use of the word art did not appear until the late 1600s.

So it is possible some of the pictures were used to teach young hunters but so many of them have other characteristics that mean there had to have been links with some belief system.

Were all the cave paintings of animals?

No, in El Castillo cave, Northern Spain, there are Palaeolithic paintings. These are stencils of hands and disks made by blowing paint onto the wall and date back at least 40,800 years’. This makes them Europe’s oldest known cave art.[iv] In France the cave paintings of Chauvet have been dated to 33,000 years ago; the paintings found at Lascaux to 17,000 years ago; and those at Niaux between 14,500 and 13,500 years ago. Each set of paintings show differences and a development in style of representation.

In Chauvet the drawings depict animals. It is suggested that these represent the animals that provided the people with food and raw materials along with the predators that endangered or competed with them. The Lascaux paintings, on the other hand, show depictions of strange beasts such as ones that are half-human and half-bird and others that are half-human and half-lion. Those in Niaux are depicted as a huge frieze showing bison, deer, ibex, and horse and there are carvings showing salmon or trout and bears claws.[v]

Consequently, some archaeologists have seen these representations as indications of the development of a form of religion. The paintings in Niaux were made as the Last Glacial Maximum began to warm and seem to be an impression of the animals around the people, indicating a spiritual expression of existence. 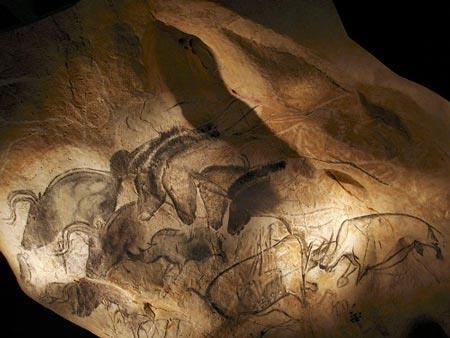 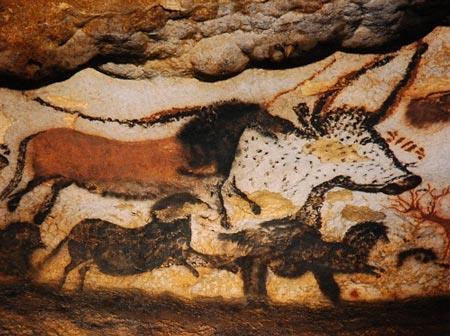 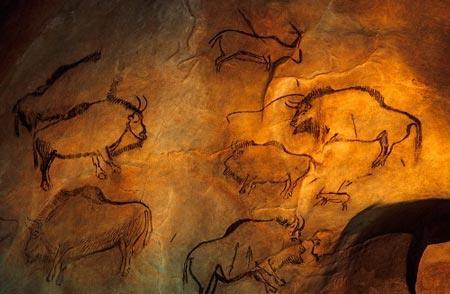 There are very different drawings in each cave, but were paintings the only things the people produced and were France and Spain the only places?

The distribution of cave art is worldwide but in Eurasia it is most abundant in areas that are also rich in decorated objects including:

The current total for Eurasia is about 280 sites. Some like Creswell Crags, England, contain only one or a few figures on the walls, others like Lascaux or Les Trois Frères have hundreds.

The following map shows the limits of the Last Glacial Maximum. It also shows the main sites of cave art in Eurasia and though not fully inclusive of all cave art it is a good indicator of the spread. 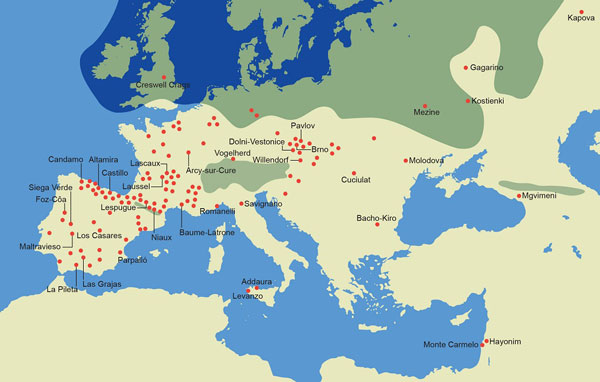 It’s interesting to note that so many cave art sites are found in groups while some are just single sites. However, it would be unfair to draw too many conclusions from this map since there are so many factors affecting the presence of cave paintings. The most important is the climate of the area. So, as only a few have been found in the temperate wet climate of Britain, so does that mean the people in the British Isles drew little cave art or has the majority been eroded away?

A striking feature of many of these cave paintings is the fact that they are often in large caverns with interesting sound qualities.

The evidence would be the existence of musical instruments, and flutes from 42 - 40,000 years ago made from bird bone have been found and reconstructed. They show the people had an understanding of how length, diameter and position of holes influenced the sound.v Did they play only one instrument at a time or did they play in groups? We can only wonder at the sound these people produced.

[ii] Mithen, S.(1999) The Prehistory of the Mind: The Cognitive Origins of Art, Religion and Science. Thames & Hudson.

[iii] Lewis-Williams, D. (2002) (The Mind in the Cave: Consciousness and the Origins of Art Thames & Hudson