In this experiment, students observe what happens to white light as it passes through water droplets.

Whilst travelling north from Athens to Pella, in Macedonia, your route takes you by some awe inspiring sites- the Edessa waterfalls. When you stop to paint a picture of the waterfalls, you see light of various colours. Like all good ancient Greek science-artists, you decide to investigate further…

Your teacher might show you the following experiment but if you are supervised at home you could do it for yourself.
The ‘rainbow’ will be created with water coming out of a hose pipe. Working with another person one of you will spray the water while the other observes the water spray from a number of different angles.
On a sunny day early in the morning, when the sun is low on the horizon, use a garden hose with a fine spray nozzle on to spray a fine mist arc of water so the sun shines through it. One of you is to stand in different positions to look through the spray of water and see if you can see the ‘rainbow’.
Do not look directly at the sun. Change over so you can both make observations. Draw a picture of the rainbow you saw.

Set the water bottle on a table and shine the flashlight at a sharp angle down through the bottle until the light beam is split into its colours.
Take turns to hold the sheet of white paper where the rainbow appears and to draw the rainbow on to another piece of white paper.

If we split white light into its component parts, known as the spectrum we get sevencolours that form the colours of the rainbow. They are Red, Orange, Yellow, Green, Blue, Indigo and Violet sometimes written as ROYGBIV which can be remembered as a mnemonic ‘Richard Of York Gave Battle In Vain’, see Fig 1. Indigo is a blue violet colour and often hard to determine so in some diagrams, as below, we see blue and then violet. 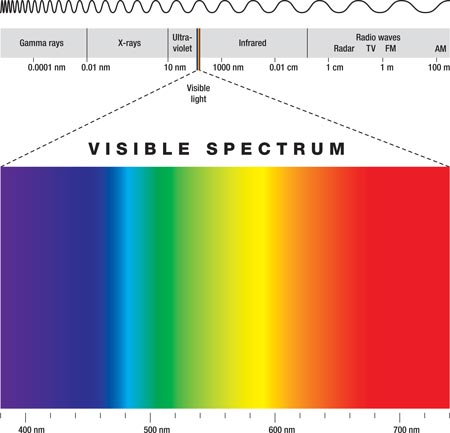 The rainbow is formed as the sun hits the arc of falling water droplets which act as prisms. The white light is bent and split, or refracted, into the component colours or spectrum. The light hits the other side of the water droplet and is reflected off the surface back through the water drop to be refracted again as it leaves the drop. Red light is refractedless than the violet light so it appears on the top of the rainbow spectrum. The colour pattern of a rainbow is less distinct than that from a glass spectrum, and the colours are less saturated.

Light is made of all the colours in the rainbow. When it hits a coloured object, most of it is ‘soaked up’ or absorbed and only one colour is ‘bounced off’ or reflected. A red object, for example, absorbs almost the full spectrum of light and reflects the red light only.

Our eye is able to see the colour because of light-sensitive photoreceptor cells called rods and cones that are in the retina, a layer of tissue in the back of the eye.

(This is an important experiment designed to establish some key concepts of light and colour. It should precede the Spinning Colour Disk and Benham’s Disk practical.)

Ask pupils to draw two rainbows on a piece of white paper; one using any kind of coloured crayons and one using felt tip pens.

They should then draw two more rainbows, using the same coloured crayons and felt tip pens, on dark paper.
Ask the pupils to get into groups of two or three to discuss their drawings and the colours.

They should compare their drawings and comment on how similar or different they are, particularly the colour depth, combination and order of the colours.

The results are for discussion, along with the theory behind these ideas, to establish a concept of the spectrum. For this, pupils can work in groups of three.

All ages of children can take part in this activity, but it is probably best used with upper junior pupils. The aim is to gain some understanding of the thinking of the artist and scientist with regard to colour. It links with:

There are no real hazards in this practical. However it is possible that the water will be an inviting distraction and a pupil might get wet. It is also worth warning the children not to look directly at the sun.

The rainbow works best on a sunny day early in the morning, when the sun is low on the horizon.
A torch with a good strong beam of white light is best for the bottle experiment.

Looking through the water arc with the sun coming from behind them the children should see a rainbow.
The students should see a rainbow if they stand with their back to the sun and look through the water arc in front of them that has the sun shining through it.
It is important they see the range of colour in the order: Red, Orange, Yellow, Green, Blue, Indigo and Violet.
Then they should note the correct order and the mnemonic ROYGBIV = ‘Richard Of York Gave Battle In Vain’ can be introduced to them. See if you can make up your own mnemonic for the spectrum.

Pupils shine a torch through a clear glass screw top bottle, or a glass beaker, full of water
The light beam is split into its colours.
Hold the sheet of white paper where the rainbow appears.
The bottle is acting as the prism and is similar to a very large water drop.