Use this resource to show students the standard pieces of equipment found in most university and research chemistry laboratories.

This resource shows the standard pieces of equipment found in most university and research chemistry laboratories.

The most commonly encountered balance is a general purpose top-pan balance (1) which will be able to weigh to the nearest 0.01g. For more accurate work an analytical balance (2) must be used. This balance has many similarities with the simple top-ban balance but it can weigh to the nearest 0.0001g. The doors of the balance must be closed before taking a reading to prevent any disturbances in the air affecting the measurement. 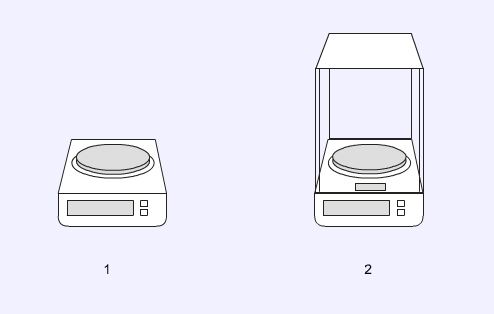 Column chromatography is a technique used for the separation of mixtures. Chromatography columns are designed to be filled with a ‘stationery phase’ (usually silica gel) and the mixture to be separated is passed through the column with a solvent system. A simple column (1) has to be plugged with a small amount of glass wool to retain the stationery phase, whereas this is unnecessary in a column fitted with a sintered glass support (2). Prepacked silica ‘flash’ columns (3) are becoming cheaper and increasingly more common in university and research laboratories. These prevent the need for chemists to handle fine, loose silica which can become airborne and present an inhalation risk when making silica gel. 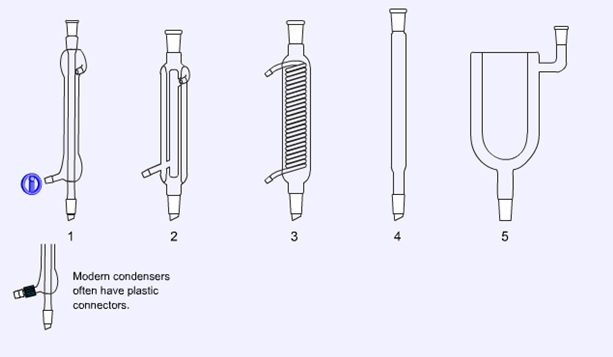 The Dean-Stark apparatus is designed to collect water produced in synthetic reactions carried out under reflux. The reactions are normally done in solvents (for example toluene) that remove water formed in a reaction as an azeotrope. The condensed mixture of toluene and water collects in the burette and the denser water separates and falls to the bottom. The tap allows the water to be removed.

Desiccators are used to dry solids and keep them dry by containing them in a sealed vessel containing a drying agent. A vacuum desiccator (2) has a tap, usually on the lid which allows the desiccator to be evacuated to speed up the drying process.

Receiver adapters are used to allow collection of distillates emerging from a condenser. The simple receiver adapter (1) can be used to direct the distillate into a conical flask. The jointed adapter (2) would be used with a round bottomed flask, the vented side arm preventing a closed system which would otherwise form an explosion hazard. Adapter 3 is designed for vacuum distillations. The ‘pig’ adapter (4) allows collection of three different fractions without interrupting the distillation. The receiving flask can be swapped by rotating the ‘pig’ about its joint.

For straightforward filtrations where only the filtrate is required (e.g. removing unwanted solids or decolourising charcoal) a filter funnel (1) and fluted filter paper (2) is used. In situations where the solid is required, a Buchner flask (3) is fitted with a Buchner funnel (5) using a Buchner collar (4) to form a good seal when under suction. Flat filter paper (6) of the appropriate diameter is used in the Buchner funnel.

Round bottomed flasks (1, 2, and 3) are generally used for reactions carried out under reflux. Twin necked flasks and three necked flasks allow the fitting of other jointed glassware such as dropping funnels and gas inlets. Pear shaped flasks (4 and 5) are the best choice for distillations, their shape allowing more of the product to be distilled. The twin necked flask (5) can be used to add a reagent whilst the product is being removed by distillation.

There are several types of fractionating column but the most common is the Vigreux column (1) which has indentations designed to force condensing liquid into the rising vapour. This is necessary to achieve the equilibrium needed for efficient fractionation. The Vigreux column is often incorporated into a still head (2). Alternative columns are packed with glass beads (3) or open columns (4).

A ‘Lab Jack’ is an adjustable platform that can be used to raise or lower apparatus by turning the knob at the front. It is particularly useful for the raising and lowering of heat sources (e.g. heating mantles) in distillations or reflux reactions. 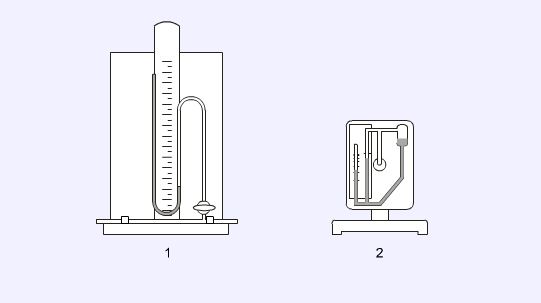 The simplest method of measuring a melting point is by use of an oil bath (1). A round bottomed flask is partly filled with a mineral oil and the capillary tube containing the sample is attached to a thermometer with a rubber band. The oil is carefully heated with a microburner. The heated block apparatus (2) can be found in many shapes and sizes but the principle is the same; the sample is heated placed in an electrically heated block and the observations are made through a magnified port. The ‘hot-stage’ apparatus (3) allows the observer to look at the sample through a microscope while its temperature is increased.

Graduated pipettes (1 and 2) are designed for adding approximate volumes of solutions or reagents. Some pipettes are graduated so that the 0 reading is at the top (1). These can be filled up to the 0 mark and the appropriate volume added. Others have the full volume at the top (2). These can be used by drawing the correct volume into the pipette and then allowing it to discharge its contents. Volumetric (bulb) pipettes (3) are designed for accurate work and the volume will be printed or etched onto the pipette body. Pasteur pipettes (4) are used for the transfer or addition of small amounts of liquids. These have no volume markings. 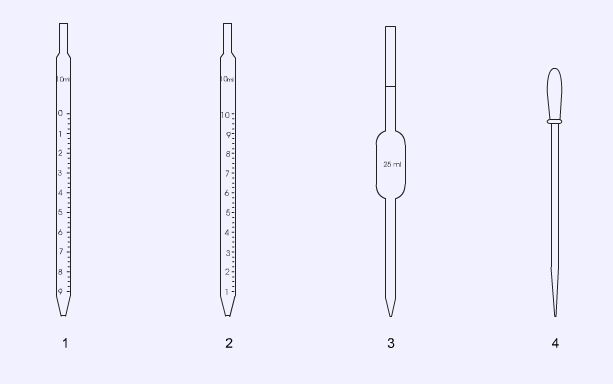 Rotary evaporators (buchi) are used to remove large volumes of solvent from solutions by rotating the solution under vacuum in combination with a water bath (optional).

Separating funnels are used to separate immiscible solvents such as water from organic solvents and are most commonly used in solvent extraction. Their tapered shape allows for efficient separation of the two layers. There are two types of funnel, those fitted with a ground glass tap (1) and those with a PTFE (‘Rotaflow’) screw type tap (2).

A Soxhlet extractor is a piece of apparatus designed to extract substances with a low solubility in the extracting solvent. It does this by allowing condensed solvent to wash through a paper thimble (1) placed in the extractor (2) which is designed to return the washings to the boiling flask by siphon action.

Still heads are designed to connect a flask to a condenser in distillations. The simplest (1) allows a thermometer to be attached to follow the temperature of the distillate. The Claisen still head (2) has an additional socket to allow a dropping funnel or mechanical stirrer to be fitted. The splash head (3) is used to prevent the ‘raw’ distilling liquid from carrying over into the vapour. This type of still head is often used in steam distillations.

3. Gas inlet adapter, used to allow delivery of a gas (e.g. a protective layer of nitrogen) to a reaction.

6. Guard tube, when filled with a drying agent, such as calcium chloride, it can be used to protect reactions from moisture.

4. Burette (black graduations), used for titrations where the solution is clear or of a pale colour.