Responding to England’s growing shortage of specialist physics and chemistry teachers, a new report commissioned by the Gatsby Charitable Foundation outlines eight interventions for secondary schools to improve science teacher recruitment and retainment. But are these interventions as cost-effective, low-risk and straightforward as it claims?

‘England has a severe shortage of teachers, particularly in science, and this is only set to worsen with the secondary-age school population forecast to grow by 19% in the decade to 2026,’ comments the report’s author Sam Sims, a researcher at UCL’s Institute of Education. Indeed, numbers of physics and chemistry trainees have declined each year for the past three years. While policymakers experiment with marketing campaigns to bolster recruitment and student loan subsidies to improve retention, most schools cannot afford to wait. Sims believes the new report provides school leaders with actions they can take now.

The eight research-based proposals focus on deployment, development and pay. With many teachers having to cover biology, chemistry and physics, one suggestion is that school leaders allot more lessons to one science, especially for early-career teachers. Assignment to specific key-stages is also particularly important for these teachers.

Arranging for early-career teachers to work with more experienced science teachers and to undertake science-specific professional development (PD) have both been shown to improve retention. Instructional coaching, a specific form of PD, improves teachers’ ability to raise pupil attainment in science, but requires specific skills. The report suggests school leaders train teachers to deliver it.

On pay, the report notes new teachers are two to three times more sensitive to salary than a teacher with ten years’ experience, so paying them slightly more can increase retention. One cost-neutral option is to flatten pay gradients, giving early-career teachers more pay initially followed by slower pay rises. A more controversial suggestion is to vary teacher pay by subject, and even within science departments, reflecting the fact that science graduates tend to earn more outside teaching than inside.

Finally, the report suggests that teachers are more likely to leave when they have low levels of autonomy. It proposes training managers in ‘autonomy-supportive’ leadership, which involves developing connections between teachers and discussing decision-making. However, acute accountability pressures may make this difficult in some schools. 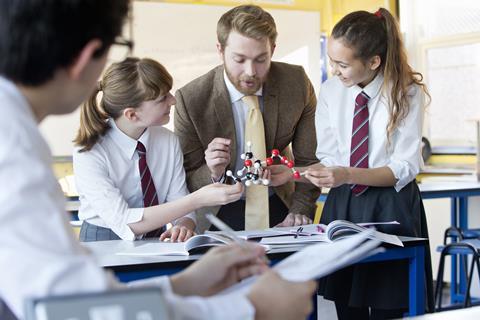 The Gatsby Foundation has unveiled eight ‘evidence-based’ principles that it says will improve science education quality and encourage science teachers to stay in the profession. But how easy will they be to implement?

Anna Vignoles, who researches the economics of education at the University of Cambridge, says Gatsby’s proposals are timely. ‘The situation with science teachers has got worse in recent years, and with our ambitions to have a more skilled workforce and to invest heavily in R&D, science teachers will be key,’ she says.

However, Helen Skelton, head of science at Beaumont School, a comprehensive in St Albans, thinks some of the proposals will be very difficult to implement in the current financial climate, particularly providing higher pay. ‘Paying staff higher salaries will be very challenging to implement with school finances already under great strain,’ she says.

‘Schools have had the autonomy to pay some teachers more but most choose not to do so,’ agrees Anna. She points out that many school leaders would be concerned about pay differentials reducing team-working across departments and schools. ‘However, there is no doubt that some pay differential is likely to be needed to attract and keep science teachers, if their outside options continue to be good,’ she adds. ‘The problem with a flatter pay gradient is that you may lose teachers a few years into their career when pay progression becomes limited, so the relative pay of teachers throughout their career needs to be competitive.’

Anna also welcomes the emphasis on specialisation. ‘Asking a physics teacher to teach biology, chemistry and physics is like asking a French teacher to teach French, German and Italian. Many teachers can and indeed do this but you could see that it would increase workload and potentially reduce job satisfaction.’

Helen also supports increasing specialisation. ‘At Beaumont, we have excellent retention of science staff, including those who have trained at the school. We have made it a priority to deploy teachers within their specialism as far as possible at KS4 and 5, with additional training and/or time being given to teachers where this has not been possible,’ she says. ‘When teaching outside of specialism is necessary, due to staffing constraints, then I believe that time to prepare and access to expert colleagues are the most valuable resources a teacher can be given,’ she adds.

In Helen’s experience, high-quality training and mentoring are crucial. She believes that the support she received during her early years of teaching were essential for her development and confidence in the classroom. ‘Beyond the formal mentoring during training and NQT years, this support came from being part of a highly qualified, well-resourced department where there were many experts who I could learn from through conversations, sharing resources and lesson observations,’ she says. ‘Had I been in a less supportive environment, or one where I was the only chemistry/physics teacher, I am certain that I would have struggled much more and it would have taken me longer to gain confidence and skill. In an extreme situation I could well have left the profession.’

John Holman, former president of the Royal Society of Chemistry and senior adviser to the Gatsby Foundation, says that it’s often someone’s working conditions that can make the biggest difference. ‘The feeling that you are being trusted to get on with the job can make a big difference to a teacher’s wish to stay in a school, whereas managing by rules and numbers can create an oppressive atmosphere that may drive teachers away,’ he says. John notes that it’s important for autonomy-supportive leadership to be embraced by those at the top of schools’ management structures. ‘If senior leaders encourage autonomy in middle managers, it is much easier for science leaders to support it within their department,’ he says.

But how likely are school leaders to implement Gatsby’s proposals? Anna acknowledges that new initiatives are particularly difficult when budgets are very tight but stresses that addressing this issue is vital. Helen believes the report’s suggestions on deployment and development deserve careful consideration. ‘These seem to be practical suggestions which could often be implemented relatively easily with some thoughtful forward-planning. [But] there will be challenges around the deployment of staff especially for schools who do not have many teachers specialising in any given science.’