Post-16 courses tend to require that students recall a number of key properties associated with transition metals. These can include the formation of complex ions and coloured compounds, catalytic properties, variable oxidation states and magnetic properties.

The ‘pink catalyst’ or ‘traffic lights’ demonstration that’s been covered here previously is a common choice for displaying a number of these, but due to its popularity, there is a good chance students have already seen it.

An alternative demonstration of luminol chemiluminescence can be catalysed by a range of transition metal compounds, including those of copper, cobalt and iron. A couple of years ago, I saw a great variation on the luminol demonstration that shows the catalytic properties of copper, formation of a range of complex ions, chelation, and implies the importance of variable oxidation states. 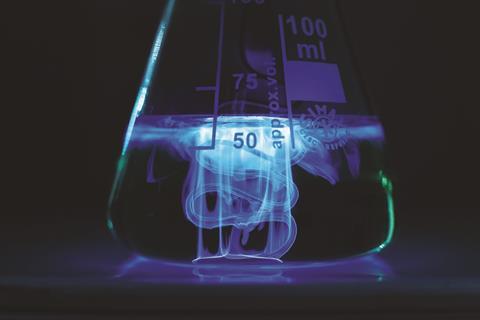 Dissolve the luminol and EDTA in the ammonium hydroxide solution before adding the hydrogen peroxide. The solution will be stable for a number of hours. I have used it successfully 24 hours later, keeping it in a stoppered conical flask, but the glow is diminished.

You will get the best effect in a fully dark room, but even in a regular lab with the curtains drawn the effect is visible. Add a copper coin or a copper strip to the solution. Immediately around the metal, a blue glow will appear. Further from the copper, the concentration of copper ions available to catalyse the reaction falls and the glow disappears. This leads to a magical flame-like effect as the fluid moves around the metal. If you remove the metal from the solution, the reaction stops. If you leave the metal in the solution, it will take on a pale green-blue hue after a few minutes. After about 30 minutes the solution will be a royal blue colour and turbid.

In the immediate vicinity of the metallic copper, dissolution of copper ions will take place and the metal-peroxide complex forms, catalysing the reaction effectively. The formation of this complex is impeded by the EDTA, which chelates the copper ions making them unavailable for ligation by hydrogen peroxide. As the distance from the metal increases, the available concentration of copper ions drops dramatically. Without the EDTA, the chemiluminescence rapidly spreads through the whole solution and the glowing-metal effect is lost. This provides an opportunity to discuss the entropic favourability of the formation of the copper–EDTA complex and the importance of this effect in, for example, chelation therapy and the administration of MRI contrast agents where the magnetic properties of the metal are important.

Over time, the solution takes on a pale green–blue colour reflecting the copper(II)–EDTA complex mixed with other reaction products. However, on a longer timescale the solution takes on a deeper royal blue indicating the presence of ammine complexes. In the quantities suggested, the EDTA can successfully chelate about 26 mg of copper. As the concentration of available EDTA drops, the chances of hexaaquacopper(II) ions reacting with the ammonia in solution increases, leading at first to the observed turbidity (equation 1) and eventually the deep blue colour as the ammonia ligates the metal directly to provide a range of ammine complexes (eg equation 2).