Exploding bubbles of hydrogen and oxygen

In this experiment, students observe as water is electrolysed using sodium sulfate solution with a little universal indicator. The electrolysis produces the gases hydrogen and oxygen, which are allowed to mix and used to blow soap bubbles. When these bubbles are exposed to a Bunsen flame, students can witness the explosive recombination of hydrogen and oxygen, giving a loud ‘crack’.

This experiment works well as a class demonstration, and involves an impressive explosion between hydrogen and oxygen. This goes down well with students.

The demonstration takes about 10 minutes. 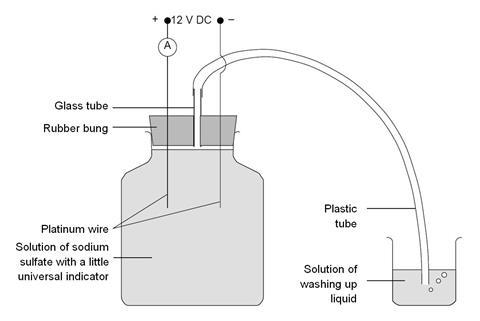 How to carry out the electrolysis of water to produce hydrogen and oxygen, using sodium sulfate to increase conductivity

Eye protection must be worn throughout this demonstration because of the hydrogen produced (EXTREMELY FLAMMABLE).

A white background behind the apparatus will allow the students to clearly see the colour changes in the sodium sulfate solution.

Some students may need the following explanation:

Water contains hydrogen and oxygen and electrical energy is causing water to split into these elements. The formula of water is H2O so you expect twice the volume of hydrogen to form as oxygen:

The explosion is caused by the energy released when the gases recombine to form water.

More able students can be given the following explanation.

However, there are insufficient of these ions to allow a reasonable current to flow, so an electrolyte – sodium sulfate – is added to increase the conductivity of the liquid. The sodium and sulfate ions are not discharged at the electrodes, but can be thought of as ‘spectator’ ions.

At the cathode water molecules are stripped of their hydrogen ions, which are then discharged, releasing hydrogen molecules and hydroxide ions. This is why the Universal indicator turns blue in this region:

Water molecules at the anode yield up their hydroxide ions, which are discharged as oxygen, while releasing the remaining hydrogen ions into solution. This is why the Universal indicator turns yellow or orange here:

It should be emphasised that, while electrical energy is being used to decompose the water into its component gases (an endothermic change), the explosion of these two gases represents the evolution of energy (an exothermic reaction). Also, the second reaction is the inverse of the first.

It is worth discussing with students the feasibility of producing hydrogen on a large scale from water and using this gas as a perfect non-polluting fuel. This would be an alternative to fuels based on petrochemicals. Much research is being done to find a way of splitting water which avoids using fossil fuels in the process.

The experiment is also part of the Royal Society of Chemistry’s Continuing Professional Development course: Chemistry for non-specialists.