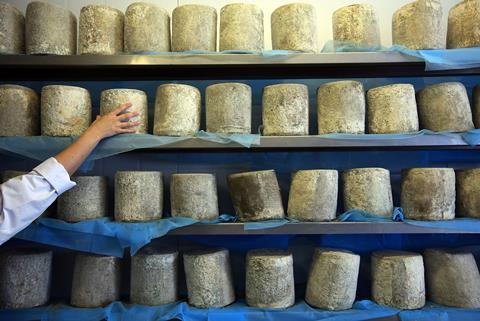 ‘If cheese were invented today, it would be a major triumph for the biotechnology industry,’ says Paul McSweeney, professor of food chemistry at University College Cork, Ireland. Cheesemaking uses more enzymes (biological catalysts) than any other food production process and involves ‘very complex fermentation’, he adds.

Most cheesemaking begins with a starter culture of lactic acid bacteria (LAB), as well as rennet. The LAB, including Streptococcus, Lactococcus and Lactobacillus, feed on milk sugars to produce lactic acid, which begins to curdle the milk and helps to prevent pathogens growing.

A knowledge and understanding of the importance of enzymes features in many specifications, including A-level and Higher chemistry. Enzymes are involved in more aspects of our lives than you may realise, and this resource can help in adding a further fascinating use to an extensive list. In a world that must consider energy efficiency as its main priority, the importance of producing new substances that are essential to enriching our lives, using less energy and associated environmental costs, is crucial.

Meanwhile, enzymes in rennet act on proteins to produce solid, cheesy curds. These are chopped up to separate out the liquid whey before the cheese ripens for days or years, depending on its type.

Some cheeses, eg cream cheese and cottage cheese, use acids instead of enzymes to destabilise the proteins, but they don’t benefit from the rich flavours that enzymes provide. 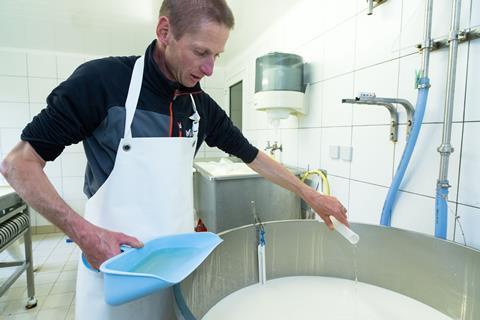 Adding rennet to milk is the beginning of the cheesemaking process and the result is akin to baby vomit!

Rennet is a collection of enzymes extracted from the stomachs of young milk-fed cows. Its most important enzyme, chymosin, curdles milk so calves can digest it more easily. Human babies don’t produce chymosin, but other enzymes play a similar role. ‘If you see baby vomit, you are actually looking at the beginning of cheesemaking,’ laughs Paul.

By the 1960s, rennet demand outstripped supply and people started searching for substitutes. The first substitutes were naturally produced by some soil microorganisms. After cloning the chymosin gene, scientists engineered bacteria to make the enzyme. Today, so-called fermentation-produced chymosin is used in up to 70% of cheeses.

Kappa casein forms a negatively charged, hairy surface that makes the micelles repel each other. By cutting a kappa casein bond, chymosin shaves off the ‘hairs’, causing the micelles to stick together and form a milky gel.

Flavours begin to develop as structures break down. For example, caseins form smaller peptides and amino acids. These in turn form aldehydes, ketones and volatile sulfur compounds, which play a major role in flavour, particularly in Cheddar cheeses.

Lipases break down some of the fat to release free fatty acids, which also contribute to flavour. ‘With some of the more pungent cheeses you would want short-chain fatty acids,’ says Michael Tunick from Drexel University in Philadelphia.

A practical activity, for age range 16-18

In this activity, students have an opportunity to make cheese and yoghurt – two foods made using enzymes. It offers different learning opportunities, depending on their chemical understanding, so can be adapted for younger age groups too. For example, for younger years, it presents another example of a chemical transformation, showing the process as irreversible (cheese cannot be used to make milk). For older years, you may wish to contextualise some organic chemistry by studying the actual chemical transformations involved.

Download the resource sheet as MS Word or pdf.

Butanoic acid is a potent flavour compound, with a cheesy flavour verging on rancid. It plays a big flavour role in hard Italian cheeses such as Parmesan and the trick is to get the concentration just right.

Flavour depends on many factors, including the range of bacteria. For example, cheeses made from unpasteurised milk often develop intense flavours more rapidly than pasteurised products, thanks to a broader spectrum of bacteria being naturally present.

The quality of the milk also affects flavour. Milk from cows feasting on fresh pastures can have a more complex flavour and vary seasonally, thanks to the range of plants and flowers, says Michael.

His colleagues used DNA sequencing to solve a decades-long mystery of why some cheeses develop an unappetising pink discolouration. They identified an extremophile bacterium called Thermus, which normally thrives in hot springs and produces pink-coloured chemicals called carotenoids. The bacteria can grow during pasteurisation. The researchers hope the finding will lead to new strategies to eliminate the defect. 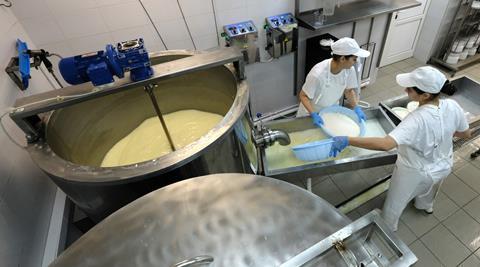 Others use science to create healthier products. Michael was set a tasty challenge while working at the US Department of Agriculture: to develop a low-fat mozzarella to top pizzas served in school canteens across the US. ‘At the time, mozzarella cheese had up to 25% fat and the most popular lunch in schools was pizza,’ he recalls. ‘The school lunch people wanted to reduce the amount of fat without affecting the flavour and texture.’ He and his team created a 10% fat product that is widely distributed to this day.

As with most cheese puzzles, the answer lay with bacteria and enzymes. Low-fat products are often bland because the fat-loving flavour molecules don’t have as many places to hide. The team added extra bacteria to boost flavour and cooked the cheese at a lower temperature so that the starter culture bacteria would stay alive for longer and break down more of the structure to give a softer product.

With the right mix of enzymes, it seems anything is possible in the world of cheese.