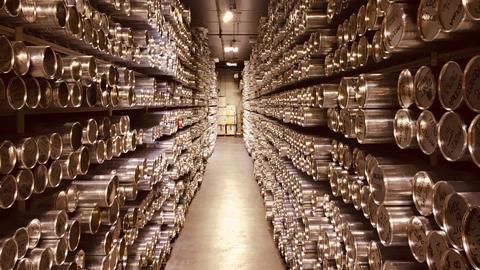 Some scientists literally go to the ends of the Earth to find answers to their questions. These intrepid researchers leave the comfort of their homes for months at a time to take part in expeditions to the planet’s polar regions. Here they hunt for chemical clues about our planet’s history that have been frozen away in the ice sheets for thousands of years. Analysing these clues reveals how Earth’s atmosphere has changed over time, and helps them understand our climate today and how it might change in the future.

‘The ice core captures a sample of the ancient air,’ says Michael Sigl, an ice-core chemist based at the University of Bern, Switzerland, who investigates ancient volcanic eruptions. ‘Everything that is in the air is archived on the ice sheet and can later be reconstructed.’ That includes greenhouse gases like carbon dioxide and methane, and all the particles that are transported in the upper atmosphere, for example pollutants like soot and even plutonium released during atomic bomb tests. 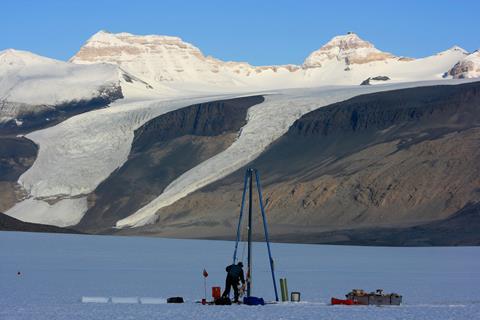 An ice core drilling site on the Taylor Glacier, Antarctica

By measuring the concentrations of these chemical species at different depths in the ice, scientists create a picture of past environments. ‘I think that the beauty of the ice cores is that everything is in one little piece of ice, so you have all these proxies of past climate and you can relate them between each other – you can look at how solar activity influences temperatures, how volcanoes influence sea ice,’ says Michael. So far, the deepest cores have been taken from over three kilometres below the Antarctic ice sheet, dating back over 800,000 years.

Environmental issues including climate change now have a high profile in the mainstream media, presenting students with a wide range of commentary and opinion. This should make atmospheric chemistry an easy subject to teach, yet it can seem dry and theoretical when presented in the curriculum context. This article helps students to see how scientists are collecting data that is providing evidence for atmospheric changes in the past, a long time before scientific records began.

The projects involve researchers from many countries, and require the technical and logistic skills of teams of experts. The ice cores are extracted using sophisticated drilling equipment, and military aircraft are often needed to help transport the ice core and scientists across the hostile polar environments. Once drilled, the ice must be kept cold, so researchers often have to process the samples in labs kept at freezing temperatures.

After the cores have been logged and measured, samples can be taken from them to be studied in more hospitable surroundings. Rachael Rhodes, an ice core chemist from the University of Cambridge, explains that this usually involves taking a small section from each core and slowly heating it. As the ice melts, it releases its chemical captives and these are analysed with different instruments. Chromatography separates out the different chemical species in the samples and mass spectrometry allows researchers to determine the elements and compounds present in the ice based upon their masses. Other techniques such as laser spectrometry can be used to analyse the gases released from pores in the ice as it melts. 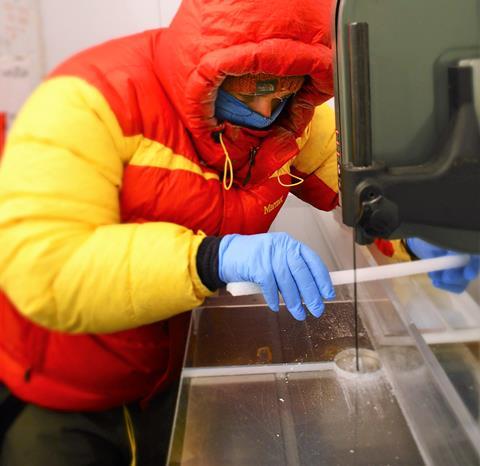 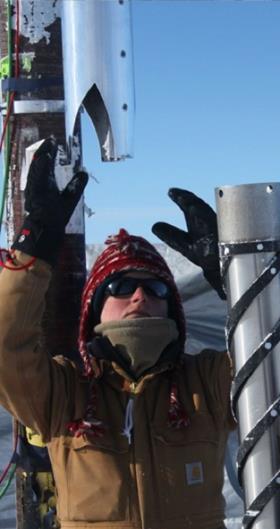 Rachael is attempting to understand the links between increases in global temperatures, atmospheric methane concentrations and changes in the extent of sea ice coverage during the last glacial period. ‘If I want to relate the soluble chemistry that’s measured in the ice core to the environmental conditions, certain things might vary,’ she says. ‘So you could measure basic sea salt, sodium chloride – as sea ice expands or retreats in an area, the amount of [NaCl] transported to an ice core site will change.’ Measuring levels of organic compounds that were produced by phytoplankton in the ancient ocean is another way to track sea ice changes, explains Rachael. ‘If there’s a greater sea ice area that then retreats each year, you get a huge amount of [biological] activity. That produces more organic compounds, which are then transported to the ice core site,’ she says.

Meanwhile, Michael is piecing together a record of volcanic activity over the last 12,000 years. ‘I am analysing sulfate and sulfur [species] that form as a secondary aerosol from the original emission of sulfuric gases,’ he says. Volcanic eruptions eject large amounts of sulfur dioxide into the atmosphere. This combines with water to form aerosols that eventually fall onto the ice sheet. By analysing these aerosols and traces of volcanic ash, Michael can fingerprint eruptions from volcanoes in different regions, mapping when and where major eruptions occurred.

Frozen in time: hands-on evidence, a practical for age range 11–14

In this activity students examine their own ice cores to construct a timeline of atmospheric changes for their sample site. This helps to add variety to teaching sequences in atmospheric chemistry and provides an opportunity for students to practise linking experimental evidence with reference information to build a full picture of atmospheric changes. The activity can be planned with different focuses including recording evidence and summarising conclusions.

Frozen in time: hands on evidence, practical for age range 11–14

In this activity students examine their own ice cores to construct a timeline of atmospheric changes for their sample site. This helps to add variety to teaching sequences in atmospheric chemistry and provides an opportunity for students to practise linking experimental evidence with reference information to build a full picture of atmospheric changes. The activity can be planned with different focuses including recording evidence and summarising conclusions.

This year, three projects aiming to excavate even older Antarctic ice were unveiled by European, Australian and Chinese teams. It will take years to dig the cores up from kilometres beneath the surface because the drilling can only take place for two months in every year. But when the work is complete, these will be the oldest ice cores obtained, allowing scientists to look even further back through time – 1,500,000 years into the past.

Editor: as we go to press, researchers have just revealed findings from ice cores that date back over 2,000,000 years.