Plastic is polluting our world, but it’s cheap and convenient, making finding an alternative material for bags challenging 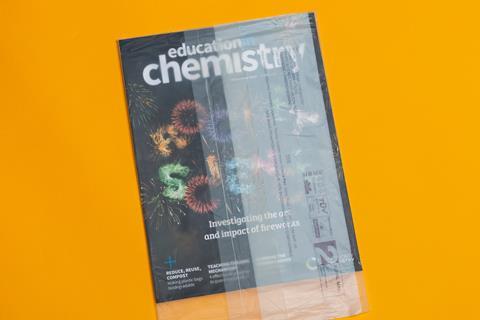 What’s in a bag? In this case it’s potato starch to make this compostable plastic wrap

Only a few years ago, you could rock up to the supermarket with just the wallet in your pocket, take your shopping to the till and wait for the cashier to pull out the plastic bags, like a party clown pulling handkerchiefs from a sleeve. Now, many of us regularly carry cloth and reusable bags. The effect of the 5p charge for single-use plastic carrier bags in the UK has decreased the number handed out in the seven biggest retailers from 140 per person in 2014 to just 19 in 2018. When Ireland introduced a point-of-sale tax in 2002, 90% of consumers moved to using long-life bags within the year. It’s a small triumph in the fight against plastic pollution. However, the carrier bag output in the UK is still over 594 million bags every year and that’s just the ones from the biggest retailers.

The trouble is plastic is so useful – and cheap. So if you do forget your cloth bags, what harm does it do to take a couple of plastic ones, and are all bags born equal? What does it really mean if a bag is marked ‘biodegradable’ and what should you do with it when you’ve finished with it?

According to Richard Thompson, a marine biologist at the University of Plymouth who studies the effects of plastic litter, consumers are too often misled or under informed by labelling. ‘That’s a real frustration,’ he says. ‘Because I see many [people] desperate to get it right and it’s actually very confusing.’ It seems trying to make greener decisions isn’t as straightforward as you might hope.

Plastic waste is never far from the headlines and we are bombarded with alternatives as we seek to reduce our single-use plastic consumption. This article looks at the science behind sustainable alternatives to traditional plastics. This provides an opportunity to explore the chemical structures of these alternatives, the monosaccharide monomers that make up natural polymers. Use the structured worksheet to guide your 16–18 students to extend their knowledge and learn new chemical terms and concepts to help them in preparation for interviews for HE or just personal interest.

This article also presents an accessible, engaging discussion of the challenges of developing plastic materials that persist in the environment for a shorter time for 14–16 students. Using the article in class is an excellent opportunity to develop reading stamina ready for context-based questions in exams and exposes students to new vocabulary.

Let’s unwrap the issue, starting with what’s in a conventional plastic bag – no ‘biodegradable’ or ‘compostable’ labels, no claims about ‘long life’, just your standard, no-frills, carrier bag, which will probably end up in landfill or, at best, recycling. Most normal plastic bags are made from low-density poly(ethene), a type of polymer that consists of thousands of carbon atoms in long, branching chains. The chains are made by stringing together small sub-units or monomers of the petrochemical product ethene. This type of plastic is considered environmentally unfriendly because as well as coming from an unsustainable source (crude oil) the polymer chains take a long time to break down. 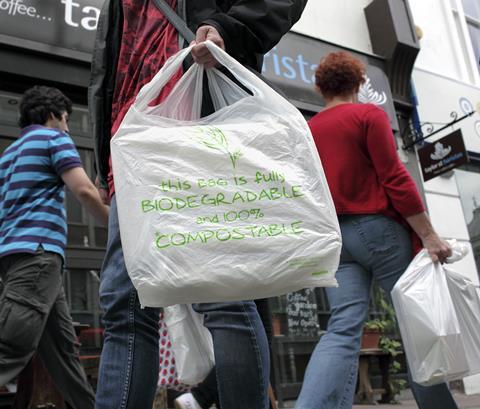 Not all biodegradable bags are made equal. Pretty much anything biodegrades – eventually

It’s this type of plastic, along with others like the polyethylene terephthalate (PET) from plastic bottles and polypropylene (PP) from food packaging films, that is piling up in landfill sites and fragmenting in the oceans. In recent years, Richard’s work has revealed the true extent of the problem in the marine environment. His 2004 study was the first to highlight the problem of plastic shredding into tiny pieces known as microplastics in the oceans. Ten years later, his team showed that these microplastics were finding their way into the mud at the very bottom of the deep sea. It’s not clear exactly how long it will take the pieces to decompose completely. It may be hundreds of years and meanwhile, they may be eaten by bottom feeders such as sea snails and transferred up the food chain through the animals that prey on them. The effects of microplastics on life in the ocean, as well as those of even tinier particles called nanoplastics, remain under scrutiny.

‘Biodegradable’ bags seem to offer a solution to the problem. But do they? What does biodegradable actually mean? ‘It means it breaks down in the environment to harmless molecules,’ says Adrian Higson, a chemist who advises companies on bio-based food packaging for the National Non-Food Crops Centre (NNFCC) in York, UK. ‘So that’s nice and straightforward. The problem is that nearly everything will biodegrade eventually.’ Which means that even if a carrier bag takes a hundred years to biodegrade, you could still call it ‘biodegradable’. But surely so-called ‘biodegradable’ bags can’t carry a biodegradable label unless they degrade faster than a conventional bag?

This activity introduces students to new vocabulary and concepts, beyond the specification. It is ideal to use with high-achieving students and those aiming to study chemistry, biological or medical sciences in higher education.

This activity scaffolds life-cycle assessments with key questions. It will require students to use sources beyond the article for research and so would make a good homework activity. As a follow-up in the next lesson it is useful to revisit what students have discovered for homework and ask them to choose which of the bags evaluated they think is best overall.

Not according to Adrian, who says a biodegradable label on its own means ‘absolutely nothing’. Currently, we don’t have the international or national standards to help us to tell the difference between something that has a ‘good’ level of biodegradability and something that does not reach that level. When it comes to biodegradability, even defining ‘good’ is a matter for debate. ‘How long would it be acceptable for an item of plastic to be littering the environment before it disappeared?’ asks Richard. ‘How long would it be acceptable for it to sit on a beach, or a mountainside, or on the sea surface? Are we talking weeks, months, years?’ Ideally, we would need it to disappear at a rate that matches the rate we’re producing it at – and that’s ignoring the five billion tons of plastic litter that’s already out there.

Earlier this year, Richard published another study, showing that both conventional bags and those labelled as biodegradable were still intact enough after three years soaking in sea water or buried in soil to be able to hold a full load of shopping. Which means that even if biodegradable bags do degrade faster than conventional ones, they don’t do it on a timescale that’s really going to help us address our littering issue.

Headed for the bin

Richard’s team did, however, test one other type of bag: a ‘compostable’ bag. While there may be no universal standards for biodegradable bags, there is a European standard for compostable plastics. It’s called EN 13432 and it certifies degradation – at least 90% of the material is converted into carbon dioxide – within six months in an industrial composter. Because industrial composters run at a higher temperature than a home compost bin, the waste degrades quicker. Bags that attain the European composting standard are tested to ensure they meet these strict requirements. According to Adrian, this standard ‘is the only thing that’s meaningful’ when it comes to biodegradation. 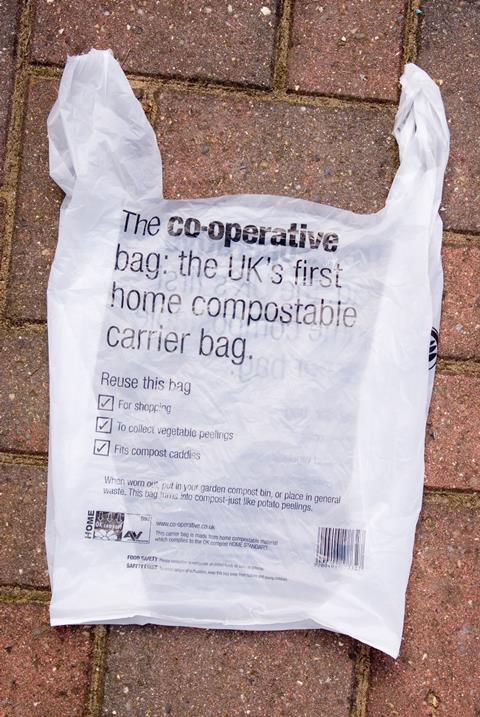 To get a compostable bag to an industrial composter, you have to make sure it goes in your garden or food waste bin. This isn’t always obvious from the labelling. Some Co-op supermarkets are now handing out clearly labelled compostable bags to those who forget their reusable bags. Compostable materials have also been adopted by publishers, to produce translucent wraps for posting magazines. The National Trust’s magazine and EiC, for example, are now delivered in a compostable, potato starch wrap. As well as the European standard, this wrap meets a standard for home composting called OK Home Compost. If you see this label, you can toss the bag into your home composter.

Compostable bags are often starch-based and come from plant sources, though it’s important to note that the sources don’t tell us anything about how fast these materials degrade. So we still need to look at the labelling for the composting standard. Similar materials have been used for a long time in liners for the food waste caddies that are emptied into larger food bins.

Labelling is the key

How did compostable bags fare in Richard’s three-year study? Well, they did disappear after just three months in sea water. They were also in a worse state than the conventional and ‘biodegradable’ bags after two years buried in soil and tore when the team tried to load them with shopping. It certainly seems like the compostable bags degraded more easily. From Richard’s point of view, though, the overall results of the study show that ‘you can’t rely on any of those materials to degrade completely and harmlessly across a range of environments’.

That’s true and the media’s reaction to the study highlights possible misconceptions about how fast ‘biodegradable’ bags will actually degrade. However, as Adrian points out, the study didn’t test the compostable bags in the environment they were designed to degrade in – a composter. The difficulty, of course, is that there are an almost infinite number of different conditions to test in and each material will take a different length of time to degrade in each environment. That’s why Adrian feels that instead of doing more testing, we should stick to the composting standard and find a way to make it clearer how compostable bags should be disposed of. ‘If that means that compostable carrier bags all need to be green, so everybody knows that it’s a green bag and anything green goes in a food waste bin or in a garden waste bin, so be it,’ he says. 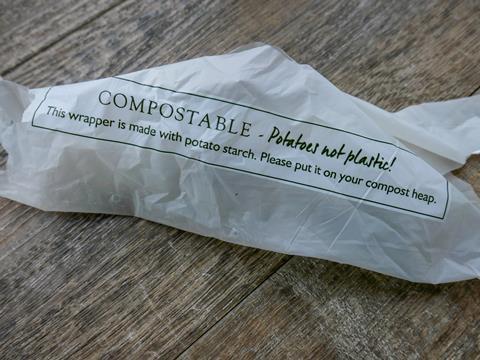 It says compostable, but that doesn’t always mean it’ll break down in your home compost bin

He does admit that there could be a place for biodegradable standards in very tightly defined uses, but those might not be plastic bags. The plastic films – ‘mulch films’ – used to cover farmers’ crops to help protect them from water loss might be one example. Even then, setting standards won’t be completely straightforward because biodegradation isn’t uniform across all farms. Farms in the Mediterranean experience much warmer conditions to those in the UK, changing how fast materials would degrade.

For Richard, biodegradability standards are necessary, as is clearer labelling, for recyclable plastics as well as compostable ones. ‘We need to work towards really simple labelling – ‘this can go in recycling’, ‘this can’t’ or ‘this goes in the composting bin’,’ he says. He suggests that industry needs to take more responsibility and step up to the challenge of designing packaging with end-of-life in mind from the start. That way, we can get back to deciding what we want to buy, not what we want to buy it in.

Of course, plastic bags are only part of the plastic problem, but as most of us encounter them on a daily basis, we want to know how we can make wiser decisions about using and disposing of them. The bottom line is that taking a reusable bag to the shops beats putting any kind of bag in a bin – even if it’s a compost bin. But if you do happen to be caught short, compostable might be the best you’ll get for now.

The internet is rich with experiments showcasing different types of polymerisation and aspects of environmental sustainability. These can be integrated into a scheme of work as well as being used on enrichment days or with science clubs.