When concepts from chemistry help us understand medical matters 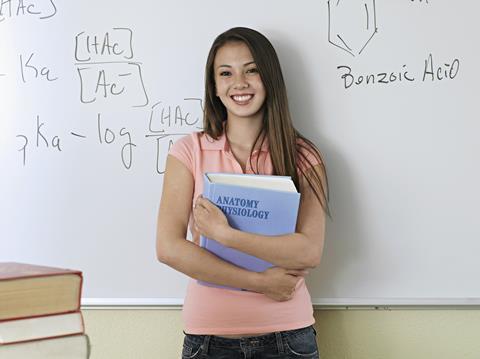 Why is there a breath test for alcohol but not for cannabis? Why are blood tests unreliable indicators of cannabis use? It all comes down to chemistry and its application in medicine.

A sound understanding of chemistry is very important for the study of medicine and most university courses in medicine, veterinary medicine and dentistry have an advanced chemistry qualification (such as A-level, Scottish Highers or IB) as a prerequisite. Indeed, many biomedical science courses include chemistry as part of their first year programme.

So, just which parts of school chemistry are relevant? In this article, I’ll explore some situations where chemistry comes in handy in medical science.

The polarity of a drug molecule plays an important part in determining how easily that drug can cross cell membranes. A typical cell membrane is largely made up of phospholipid molecules that assemble spontaneously in water such that their non-polar fatty acid tails face each other and the polar head groups face towards the cell’s cytoplasm. A hydrophobic drug molecule can pass through the lipid bilayer readily but a hydrophilic one cannot. This means that many molecules that are important in cellular metabolism, such as sugars and amino acids, do not pass through the lipid bilayer and must be transported across the cell membrane by a carrier protein or transporter.

Polarity also has wide ranging implications for the way many drug molecules reach their site of action. Many drugs that act in the brain are able to do so because they are relatively non-polar and can cross from the blood into the brain simply by diffusion. The main active ingredient of cannabis, delta-9-tetrahydrocannabinol (THC), is one such molecule. Figure 1 shows the structure of THC with only two areas of polarity (the two oxygen atoms) within a long hydrocarbon.

The non-polar nature of THC means that it is poorly soluble in water and hence in blood. When THC is administered, it quickly moves out of the blood into fatty tissue. Therefore the concentration in the blood doesn’t reflect the amount of drug in the body, or the concentration of drug at its site of action in the brain. This explains the low correlation between the blood levels of cannabis and the degree of biological effect.

Figure 1 - THC and lignocaine; the non-polar structure of THC (left) explains its low solubility in the bloodstream; lignocaine (right) is a weak base and is protonated in low pH

So why can’t we design a breathalyser test for cannabis like there is for ethanol? THC’s relatively high boiling point (157°C) explains why it is not removed from the body by exhalation. In contrast, ethanol has a lower boiling point (78°C) and is more water soluble – meaning it dissolves readily in the blood and diffuses across membranes quite easily. So the ethanol concentration in exhaled air reflects its concentration in the blood, and this in turn reflects its concentration at the site of action in the brain.

Download a question and answer worksheet featuring examples where chemistry is needed to solve a medical problem (as MS Word or pdf).
Download a printable version of this article (as a pdf) to hand out in your class.

Blood pH is generally maintained at around 7.4, but in some cases of localised inflammation the pH at the site of infection decreases – this can affect a drug’s behaviour. The local anaesthetic lignocaine’s pain-relieving action decreases at lower pH because it needs to enter into nerve cells to reach its site of action.

Since lignocaine is a weak base, the increased hydrogen ion concentration at low pH means that the concentration of the drug’s charged form (BH+) is increased, as shown in the equation above. This charge prevents it crossing the cell membrane, so it can’t get to its site of action.

In generalised inflammation, as occurs in sepsis, the body pH can fall from 7.4 to 7.1 or even 6.8. This may seem like quite a small change in pH, but it means a very large change in the ionisation of a weak base.

At the heart of cellular respiration are oxidation–reduction reactions that generate heat from the chemical energy store in foods such as glucose.

During this process, the coenzyme nicotinamide adenine dinucleotide (NAD+) acts as an oxidising agent, accepting electrons. Dehydrogenase enzymes remove two electrons and two protons from the substrate, in this case glucose. The electrons and one proton are passed to the NAD+, while one proton is released into the surrounding water.

The NADH produced by these reactions is then used in a series of electron transport reactions catalysed by multiprotein complexes, ultimately reacting with protons and oxygen to produce water. The energy transferred during these reactions helps power the synthesis of adenosine triphosphate (ATP), an important chemical that drives numerous processes in living cells.

In this article I’ve only scratched the surface of how concepts from chemistry are important in understanding biology, and the areas where medical and biomedical students need to be able to apply their understanding. So many of the massive advances being made in biology and medicine are at the molecular level – where a sound grasp of the ideas of chemistry is essential.