Imagine that you lived 200 years ago and you needed a filling. If you were rich, the chances are you could afford gold or a tooth ‘donated’ from another human, which could be tied onto the surrounding teeth using silk or wire thread. If you weren’t quite so rich, then the tooth might have been scraped out using animal bones or sharp flints and filled with bitumen, shell fragments or beeswax. Oh and there would have been no pain relief since the first local anaesthetics were only discovered around 150 years ago.

Advances in chemistry have helped us develop effective pain relief, design more robust materials for fillings, and find better ways to repair and replace teeth. Because so much of dental science derives from chemistry, it is now a prerequisite for dentistry courses at university. So, just which parts of school chemistry are relevant? In this article, I’ll explore some examples where chemistry is essential in our understanding of dentistry.

The outer layer of the tooth is made of enamel. This is mostly formed of a mineral called hydroxyapatite – which contains calcium, phosphate and hydroxyl groups – as well as small amounts of carbonates and organic components, mainly protein. This carbonated hydroxyapatite occurs in bundles of 10,000 or so elongated crystals, sometimes called nanowires, each of which measure up to 1 μm long, 50 nm wide and 25 nm thick. These bundles form a weaving pattern that prevents cracks from forming. The hydroxyapatite is in a constant process of demineralisation (dissolving) and remineralisation (precipitating).

Trace elements that go in between the hydroxyapatite nanowires, in particular fluoride, magnesium and carbonate, determine the enamel’s hardness and resistance to acid attack. The developing tooth has higher concentrations of carbonate, which increases its solubility in acid. Incorporating fluoride, which can replace some of the hydroxyl ions, gives a much greater resistance to acid and aids remineralisation, the process whereby enamel that has worn away or dissolved is reformed. However, if the fluoride concentration is too high during formation of the tooth, the enamel can soften and take on a mottled appearance.

One way to get even tougher, acid-resistant teeth is to incorporate iron, as beavers have done. They have rather unattractive orange teeth and it’s the presence of iron between the hydroxyapatite wires that makes them harder – an important quality, given the ability to cut wood is critical for their survival.

The effect of fluoride on teeth can be modelled in a practical using eggshells and toothpaste. Apply the toothpaste to an egg, place it in a small plastic bag or cover with plastic film and leave for several days, then rinse off and place into vinegar. Keep a control egg in another plastic bag but without the toothpaste. After a few hours in the vinegar, the untreated egg shell will have dissolved but the toothpaste-treated shell will not. Students could be asked to design their own experiment to investigate whether different types of toothpaste work equally well, or whether a sodium fluoride solution gives the same effect. 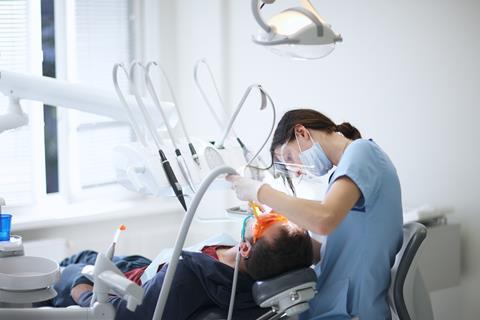 Amalgam has been used in fillings for over 150 years as it is durable, strong and cost-effective. Mercury makes up half of the amalgam mixture, while the other half comprises a powdered alloy of silver, tin and copper. Although mercury is a liquid at room temperature, the alloy it forms with the other metals is a hard-wearing solid. In recent years, using mercury has become controversial because it is known to be damaging to health. And while there is little evidence of adverse health effects when used in the amounts required by dentists, the use of mercury in fillings is being phased out in the European Union due to environmental concerns.

At the forefront of new filling materials are composites that can be applied as a paste and then hardened using light-activated polymerisation. A composite material is made of two or more substances with different characteristics, the combination has improved properties compared to its component parts. Composite resins used in dentistry contain a filler, typically made from silica or silicates, and a monomer. The polymerisation reaction is triggered by the interaction of light with a photoinitiator such as camphorquinone. The filler particles play an important role in the properties of the finished product, with very fine-sized particles improving the filling’s durability.

Injections of local anaesthetics can be painful! However, relief is available in the form of anaesthetic gels that are applied to the skin’s surface before an injection. The anaesthetic in the gel needs to diffuse from the surface of the skin down into the tissue, where nerve endings are located.

The first local anaesthetic to be isolated was cocaine, which had been extracted and purified from coca leaves by the chemist Albert Niemann in 1860. Niemann did what was typical of chemists at the time and tested out the newly-isolated compound on himself, discovering that it caused numbing of the tongue. The chemical structure of cocaine was used as the starting point for the development of better local anaesthetics that lasted longer and reduced the risk of abuse and addiction.

Most local anaesthetics have an aromatic ring, an ester or amide link and an amine group. The aromatic ring provides lipophilicity, allowing the drug to cross cell membranes. This is crucial because it needs to enter nerve cells to reach its site of action.

The terminal amine group is a tertiary amine in the case of cocaine and lidocaine, which means the drug is a weak base and is charged at tissue pH (7.4). This charged group is essential for binding to the target protein in the nerve cell and blocking it.

The ester or amide link is important for terminating the action of the drug, as it is a target for enzymes that break these types of bonds. The earlier derivatives of cocaine all had ester bonds, which are fairly rapidly hydrolysed by enzymes in blood plasma. In contrast, lidocaine was developed with an amide bond, which is only broken by enzymes in the liver. This means that lidocaine’s action lasts long enough to get you through the time in the dentist’s chair but wears off in time for your next meal, and you can go home with a repaired tooth that will last for many years.

Jenny KoenigJenny specialises in science and maths education from secondary through to postgraduate level. She is a part-time teacher of science and maths at GCSE and of pharmacology and maths for biologists at university
Follow @https://www.twitter.com/@jennyakoenig