The Egyptians sought a permanent blue pigment to depict their royalty and gods with the necessary reverence. Here we look at how the Egyptian achieved a blue pigment that didn’t degrade over time.

When it came to wall paintings depicting their gods or deities, many early Egyptian artists had trouble representing the gods. Black, brown, yellow and red pigments could be found and extracted from ores or soils, so these colours are common. However, they were considered by the Egyptians as too lowly a colour for depicting their gods.

The colour they wanted was blue, which was rare and expensive. Hence, in many temples the gods are painted in blue, the pharaoh wears blue in his crown because he is god on earth, and when dead he is shown as blue because he becomes deified as a god. This idea continued into Christian times and the colour of the Madonna’s dress is frequently shown in blue.

A blue pigment can be obtained from azurite, a weathered form of copper carbonate (Cu3(CO3)2(OH)2), but over time this changes to green malachite (Cu2CO3(OH)2). In prehistoric paintings blue was missing because there are few blue minerals and those that are blue are chemically unstable or too hard to use.

From around 633 CE, blue is again missing in great quantities from the art produced. Where blue is used, the most frequently used mineral was small quantities of lapis lazuli. This very expensive mineral pigment from Afghanistan was ground into a powder and mixed with a binder to make the paint. This gave rise to the price of a painting in the medieval period being dependent upon the amount of blue in the picture.

In their temples and tombs, the Ancient Egyptians pose an interesting problem. A range of blue hues can be seen; more than if they just used lapis. So, where did it come from?

From analysis of archaeological evidence the Egyptians and ancient Assyrians did make a lasting cheap deep blue pigment – but how did they do that?

The clue was found by looking at the earthenware. Sometime around 3100 BCE a deep blue pigment was manufactured for glazing pots. When this blue glaze was ground into a fine powder it made a blue pigment. This blue pigment was suitable for painting if mixed with a binder such as gum arabic or egg, to make tempera paint. This blue pigment is also known as blue frit. Technically a frit is a ceramic material that has been fused to form a glass, quenched and granulated. Frits are important in making enamels and ceramic glazes.

This blue pigment was one of the first synthetic pigments and is calcium copper silicate or cuprorivaite. In the Ancient Egyptian language it was known as hsbd-iryt, which means artificial lapis lazuli, indicative of the ancients’ obsession with this precious stone.

The range of blue, from a light to a dark blue colour, depended upon careful changes in the processing to produce slightly different compositions of the pigment. A lighter colour was obtained by reducing the grain size during grinding. Egyptian blue can also be produced with a violet tone, a manufacturing process that was known to the Assyrians who prepared a purple frit for a glaze, but it is not known if it was ever used as a pigment.

After 2500 BCE, the Ancient Egyptians went into mass manufacture of blue pigments and produced three different hues of blue. One was manufactured from the mineral lapis lazuli and was a rich deep blue, a second was a complex silicate or glass compound which could be used to make blue faience, and a third was a blue silicate complex with natron contaminated with cobalt, producing a deep blue similar to that of Delft pottery.

Egyptian blue in use

The earliest evidence for the use of Egyptian blue is in the Fourth Dynasty (c.2575-2467 BCE). It appears on limestone sculptures from that period, as well as being shaped into a variety of cylinder seals and beads.

In the Middle Kingdom (2050-1652 BCE) it continued to be used as a pigment in the decoration of tombs, wall paintings, furnishings and statues, and by the New Kingdom (1570–1070 BCE) began to be more widely used in the production of numerous objects.

The famous crown of Queen Nefertiti and certain stones of the temple of her husband, Akhenaten, owe their colour to Egyptian blue, as do many other ancient object d’art and in the famous Pond in a Garden fresco in the tomb of Egyptian ‘scribe and counter of grain’ Nebamun in Thebes, amongst other places (Figure 1). 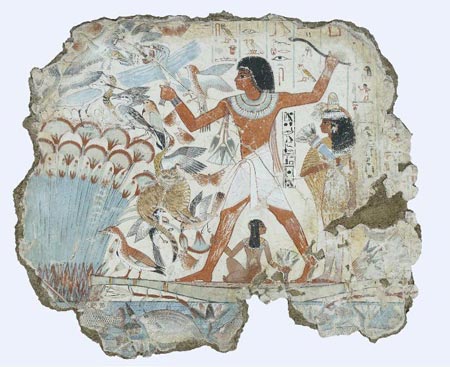 Long after the Egyptians had stopped crowning their queens with blue crowns, the Chinese were also faced with a shortage of blue.

They used some clever chemistry to come up with a synthetic blue pigment. Chinese blue and purple are chemically related to Egyptian blue, but the Chinese had swapped calcium for barium. The biggest problem they faced was only certain, rare barium minerals give satisfactory results. To overcome this they used impure mineral baryte (barium sulfate BaSO4). Baryte is found with galena (lead sulfide), and the addition of lead salts to the starting mixture gave a more favourable reaction. The lead salts act as a catalyst, converting the baryte to give the Chinese blue or purple. Is this an example of parallel development, or of trading between the Near East and Asia?

Analysis on paint found on the Terracotta army has found Chinese blue and Chinese purple and other Chinese samples have been dated to about 500 BCE. The process of making Egyptian blue requires temperatures of 800 to 900 °C, but Chinese blue and purple needs around 1000 °C.

The fact the Egyptians, Assyrians and Chinese did develop a blue pigment of their own indicates the advanced nature of their craft skills even though they had no knowledge of the chemistry. This lack of knowledge about its production leads to a number of slightly different accounts of how it was made.

The skill had to be based upon the use of the natural minerals they already had available to them. The mystery of this blue pigment is compounded by the fact that after 660 CE the deep blue of the Egyptians disappears from popular use; the recipe is lost. In fact the writer Isidore Sevilla (c.560-636 CE) last mentioned Egyptian blue in his Etymologiae published after his death (636 CE). It was to be many years before a solution to the mystery of the missing blue could even be attempted.

Blue pigments used by the Romans

With the excavation of the ruins of Pompeii in 1814 a sample of a blue pigment was found in a pot in the ruins of an artist’s shop and people again began to ask the question, ‘What is the composition of this blue pigment?’

The Romans had imported the manufacture of blue frit from Alexandria. Vestorius set up the first workshop to make it at Pozzuoli. The Romans knew it by the name caeruleum, and both Pliny the Elder and Vitruvius describes it. Vitruvius, in his work De Architectura, states how it was produced by grinding sand, copper and natron, and heating the mixture, shaped into small balls, in a furnace. Remnants of Egyptian blue have been found on the Parthenon’s statue of the messenger goddess Iris.

Apart from Egypt, it has also been found in the Near East, the Eastern Mediterranean and at the limits of the Roman Empire.

Although undoubtedly an Egyptian invention, it is unclear as to whether its existence elsewhere was a result of parallel inventions or whether its technology had spread to these areas.

A sample of the Pompeii blue pigment was sent to the Royal Institution in London and Sir Humphrey Davy attempted an analysis of the blue glaze, which was found to be of Egyptian origin. In the pigment, Davy detected sand, lime and some form of copper compound but could get no further with what the copper compound was. Later, in the 1880s the French geologist Ferdinand Fouqué discovered the copper pigment was a complex copper compound and was essentially calcium copper silicate. The problem was, how had it been made?

Details of its manufacture had been jealously guarded by the Assyrians and the Egyptians, but it was believed that desert sand from specific areas, crushed limestone (calcium carbonate), natron and fragments of bronze or copper were heated and fused into a glaze at temperatures between 850 °C and 1000 °C and the resulting glaze broken up and ground into a powder. It is assumed that scrap bronze was the main source of the copper, since tin has been found in some samples of Egyptian Blue.

The silica fuses to form a glass base in which the copper and calcium salts are suspended. This glass base is known as a glass frit. It is chemically very stable in both acid and alkaline conditions, and this makes it very fade-resistant. Because of its composition, Egyptian blue shows no reaction with other pigments found in other paints and objects. Strong light also does not influence its colour, as can be seen by Egyptian blue that has been exposed for thousands of years to sun and heat on monuments in Egypt.

Various shades of blue and violet resulted, all of them remarkably durable over the centuries. Lucas, in his ‘Ancient Egyptian materials and industry’ (3rd edition, 1948) comments that the blue pigment principally used in Egypt was a calcium copper silicate, manufactured by fusing silica, calcium carbonate possibly limestone, natron and in all probability native malachite, and grinding the product.

During the past decades, more has been determined about the chemistry of Egyptian Blue. The blue pigment had been made by heating a mixture of a calcium compound (carbonate, sulfate or hydroxide), copper compound (oxide or malachite) and quartz or silica gel in proportions that correspond to a ratio of 4 SiO2: 1 CaO: 1 CuO to a temperature of 900 °C using a flux of sodium carbonate, potassium carbonate or borax.

According to comments in New Scientist for 22 January 2000 (Stephanie Pain), the celebrated Egyptian blue was probably not invented in Egypt at all, but was brought from Syria or Mesopotamia and adopted by the Egyptian artists.

However Egyptian blue’s story has not finished. It has a new future in the 21st century as the following article in the Daily Mail (22 February 2013) illustrates: