Pompeii and Herculaneum have been described as towns frozen in time. Houses and villas with their furniture, food, people, jewellery and pets have been preserved. Organic materials were better preserved at Herculaneum as carbonised materials (see the wine shop figure 1) because of the pyroclastic surges. 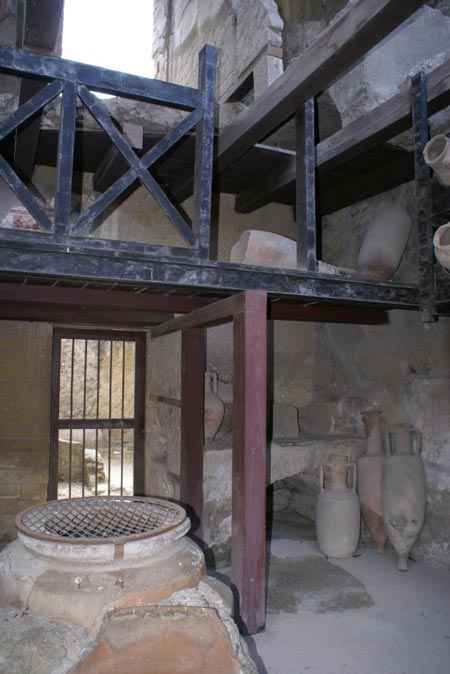 Our knowledge has been enhanced by more systematic and scientific excavations in recent years. One thing that strikes all visitors to Pompeii and Herculaneum is the amount of colour on the walls of the buildings. It is perhaps the most obvious feature of Roman art.

Many of the wall paintings or frescos adorned walls not just inside rich villas, but also inside private houses and public buildings. Depending on the function of the room, walls might be painted with imaginary architecture, still life, mythological scenes, or purely decorative motifs. Many of these motifs were derived from pattern books carried by the artists. So despite the lack of physical evidence of other forms, it is reasonable to assume that many other art objects would have shown subjects similar to those found on the painted walls.

It is clear the ancient Romans decorated the interior walls of their houses with paintings executed on wet plaster, a technique known as fresco (meaning on fresh plaster). There are many references to Roman art in other mediums such as wood, ivory, and other materials but the fact frescos are more durable and have survived well, even being buried under tons of ash, gives us a good reason to study them as a window to the other arts.

The wall paintings in Pompeii were executed using the fresco technique. On to the surface of the wall they applied a rough coat of mortar. This was often three layers thick and composed of slaked lime (calcium hydroxide (Ca(OH)2.) and coarse sand (or volcanic pozzolana). On to this they added three other coats of a mixture of slaked lime and fine sand or crushed marble to give a smoother finish. The slaked lime dried and reacted with the air forming calcium carbonate (CaCO3) in which the aggregate was evenly distributed. The top layer of wet plaster, often containing powdered marble rather than sand, was moulded and painted while still wet to resemble pediments, capitals and doorframes. This technique was known as Stucco or render. The stucco forms a very dense solid that is durable, attractive smooth and weather-resistant.

To make the surface very smooth and ready to take paint they polished the surface with glass, marble and cloth. After the polishing and before the wall was fully dry, the drawings were outlined using fine incisions to guide the artists.  After the wall had been inscribed a fresco was painted using bold primary colours. When the fresco had dried a secco (meaning on dry plaster) was applied in the form of soft pastelcolours and they added details to the painting when the surface was dry (tempera). If the surface were wood then colours might be first dissolved in wax and added to the wall using a spatula known as encaustic painting.

This greater resistance to the effects of time and wear is due to the protection of a transparent film of calcium carbonate formed by the chemical reaction between slaked lime in the plaster and the air. Interestingly calcium carbonate is the chemical that makes up natural marble. The basic outline of the composition was prepared and the colours were then added to the fresh plaster the colour pigments penetrating into the stucco material hence the painting would last longer. The surface of the finished stucco was so smooth it looked like polished marble.

This natural protection from the stucco allowed painters the opportunity to use the encaustic technique and when the final painting was finished a fine layer of wax was smoothed over the surface. This fixed the colour of the pigment and allowed the use of expensive colours, such as cinnabar red from mercury rather than the usual ochre because the layer of wax would protect the colour and painting making it durable.

The Roman artists used a range of techniques in their fresco work and Vitruvius (80–70 BCE - after ~15BCE) describes in his multi volume book De Architectura the use of sheets of lead inserted in the wall to prevent the capillary action of water from attacking the fresco from behind. He describes the preparation of many layers (often six to seven) of plaster on the wall; to produce a mirror sheen using marble powder in the top layers to create a polished surface for painting on. In this way fine wall paintings could be produced using a painstaking build-up of layers of materials.

The pigments used by the Roman artist were similar to those used by the Greeks for example:

In Greece and Rome, wall painting was not considered high art it was very much the preserve of craftsmen so yet again we do not have the use of the word art but more craft or skill.

It is reasonable to assume that since the Ancient Greek art had influenced Roman art and it developed over time, there had to be adaptation of styleand technique, and development of new and original subjects in the Roman art.

Indeed by the 1st century CE wall painting had spread through all sections of Roman society. It displayed wealth and status and the decoration was designed to impress as a form of imitation. Wall paintings was not just confined to the inner parts of the house, there are examples of wall paintings on garden walls so the garden is enhanced by stories and views on the walls.

Wall art is very prevalent in the Ancient Roman settlements of Campania. Hence, many Roman villas and art uncovered have been studied and categorised by art historians and archaeologists.

This study of the art forms, especially the work of German Art Historian August Mau (1840-1909) on wall paintings, has identified four separatestyles roughly determined by time but with large overlaps dependent upon individual taste.

Despite the difficulties one has with the chronology not being as strict as one might wish for, these four styles do give us an insight into the various fashions so it is useful to study them for the range of decoration and innovation one might find in painting in the Roman building and how the people used those to leave an expression of themselves.

The First Style from about 150–90 BCE during the Republican Period, explored wall painting techniques that simulated marble blocks such as those found in temple architecture and influenced by Greek architecture. Plain simple blocks with architectural structures such as columns but little expression of perspective lead to a flat projection as in Figure 2: 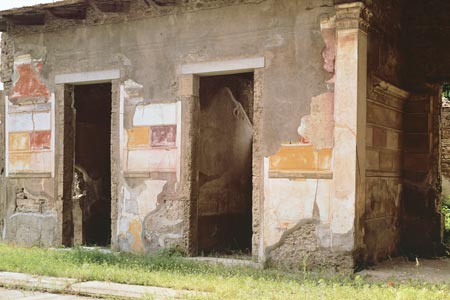 The Second Style in Roman wall painting started in the early first century 90-25BCE which coincides with the establishment of Pompeii as a Roman settlement but it is known that there are earlier examples in Rome so it would have spread from Rome to Pompeii around this time.

In the second style the artists again imitated architectural forms by using flat plaster. Now they attempted art illusion through trompe l’œil (French for deceive the eye), to suggest projection and recession by shading and perspective using simple sloping lines. They divided the wall into three horizontal, painted zones crowned with a stucco cornice based upon the Doric architectural order. Because of the experimentation with depth and perspective these frescoes are important and are frequently of the highest quality.

Later the trompe l’œil style developed and they tried to show views on the flat walls and, receding from columns, they painted images of objects of daily life shown as if real, such as metal or glass vases on shelves, and they showed tables appearing to project out from the wall (see Figure 3).

Frequently there was the use of cinnabar and vermillion pigments on the walls, which are expensive, giving us an indication of the affluence of the villa’s proprietor. 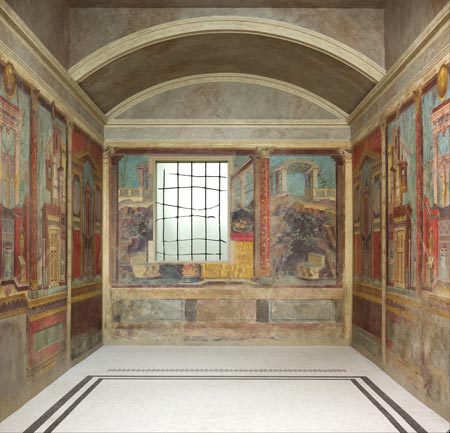 The Third Style about 20 BCE – 20 CE coincided with Augustus’ reign. Artists rejected illusion effects such as shading for depth but retained sloping lines and concentrated on simple plain flat surface ornamentation so perspective has gone, but hinted at in the picture on the wall.

This style often used a single monochrome background e.g. red, black, or white. The walls have become flat panels with unrealistic architectural details. The background can be decorated with vignettes of pastoral scenes with figures and landscape as the central theme. These almost form a picture gallery with the paintings on the wall itself (see figure 4). 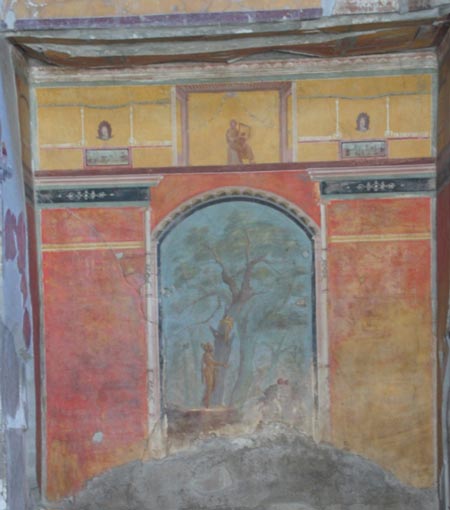 The Fourth Style around 40CE came about in Pompeii because of redecoration after the earthquake of 62CE. In many houses the decoration was often in a mixture of previous styles, but also prevalent was a fourth style that was highlydecorative. The House of the Ara Maxima (also known as the House of Pinarius and the House of Narcissus) displays the characteristics of this style with large central panels; greater attention to detail and perspective and paintings that include more intricate decorative motifs, floral borders and friezes between panels see (Figure 5). 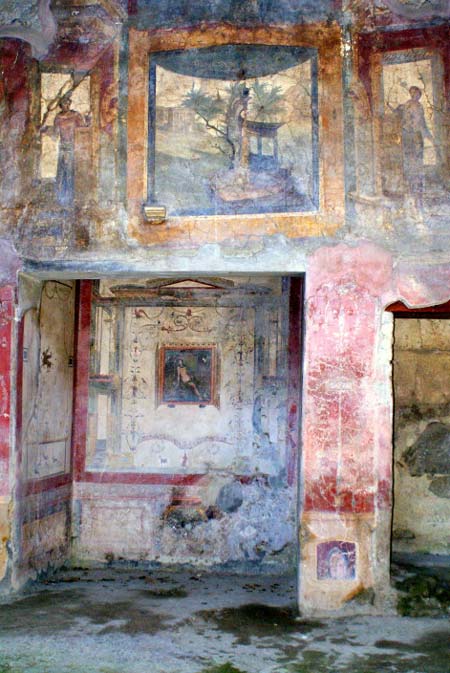