Did the Romans use the same materials as the Greeks in their painting? And where did the pigments come from?

For the most part the Roman artist inherited the palette of the Egyptian and Greek artist, but what is perhaps different is the ease with which the range of pigments became available across the Empire. This reflects the extent of trading between centres of pigment extractionand making and the main centres of art production. Again, the Romans did not recognise art as a separate thing but very much part of the daily life and culture; they had no word for art. They did however recognise crafts and skills and made much use of the crafts peoples’ expertise to style their homes in local and cultural fashion.

For art historians and archaeologists Pompeii and Herculaneum have become the main historical sources for identification of pigments and styles since they are rich in evidence, but that doesn’t mean that other sites around the Roman world don’t have something to add. It is from the collection of all this evidence that we have the best picture of the Roman styles and palette.

Other sources of evidence have to be from contemporary writers such as Pliny the Elder (23-79 CE) and his Naturalis Historia of the origins and history of art. Pliny, however, collected his evidence from other writers such as Theophrastus’ (c371- c287 BCE) De Lapidibus and from the work of the architect Vitruvius (c75 – c15 BCE) in his multi-volume book De Architectura.

Pliny, like Theophrastus, further subdivides the two main groups of pigments into ‘native’, meaning naturally found, and ‘factitious’, meaning synthetic. This indicates the degree of order that trading in a range of pigments brought to the subject. Art was becoming much more organised.

Modern techniques have been used to augment the descriptions of Pliny, Theophrastus and Vitruvius, to determine the origin and range of materials used in Roman art. These techniques include optical polarising light and electron microscopy, a large number of analyses using spectroscopic techniques as well as direct chemical analyses.

Roman wall paintings, fragments of painted plaster, in situ wall paintings and, in the case of Pompeii, pots of unused pigments have all been analysed to find out the nature of the different pigments that were being used. From examination of Roman shipwrecks still being found around the Mediterranean and other parts of the past Roman Empire, it is possible to also determine the routes and breadth of trading in pigments.

Many of these pigment substances had a medicinal as well as a colour role in Roman society, so the trade would have been extensive. Galen, one of the famous Roman physicians, had quite an extensive pharmacopeia (list of substances useful in medicine). Along with other physicians he used: 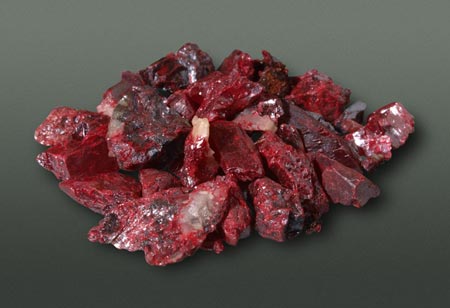 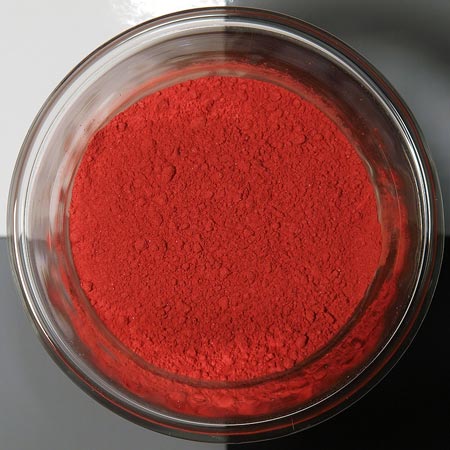 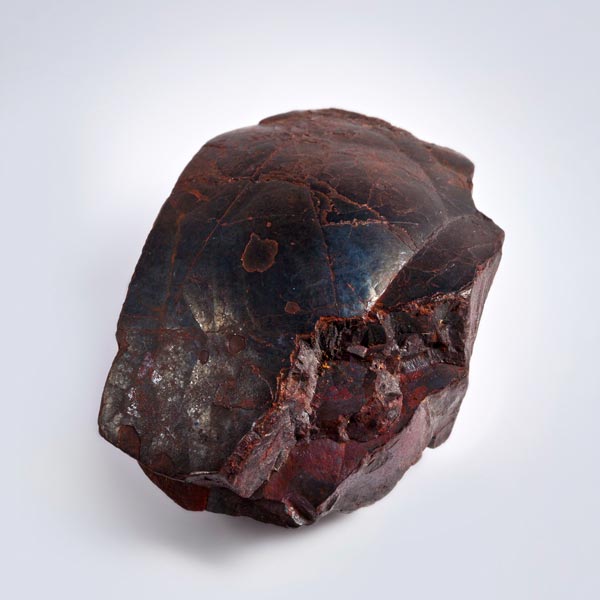 Blue pigments used were derived from: 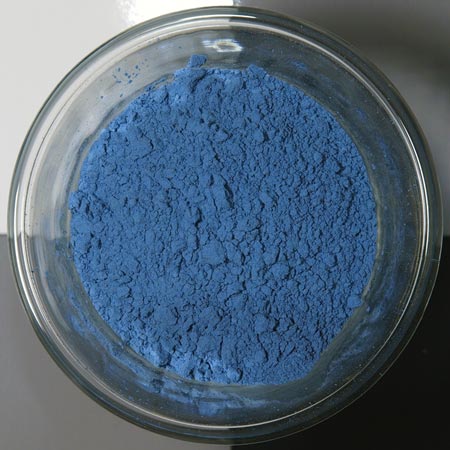 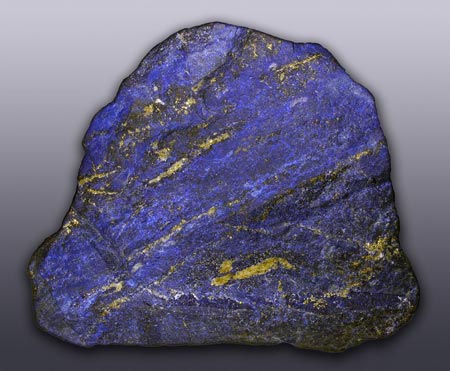 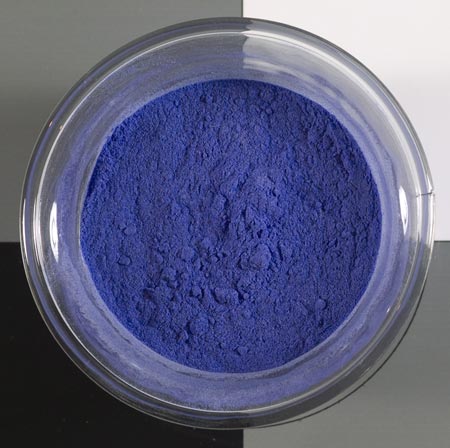 There was also the synthetic pigment known as Egyptian blue, manufactured in Italy in the Puteoli (modern day Pozzuoli, near Naples) region and marketed in the form of pellets some of which were excavated in Southwark, London.

The only purple pigment listed by Roman authors is Tyrian purple. It is the result of a secretion from several species of predatory sea rock snails in the family Muricidae the rock sea snails known as Murex. 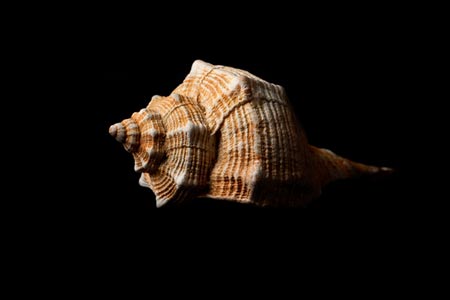 This dye was possibly first used by the Ancient Phoenicians (from Phoenicia, approximately modern day Lebanon) and traded with the Romans. Because of the high value of the purple dye it has not been conclusively detected in any wall paintings but some traces have been indicated. It seems likely it was primarily used for dyeing cloth. The primary chemical that provides the purple colour is 6,6′-dibromoindigo whose structural formula is in Figure 6: 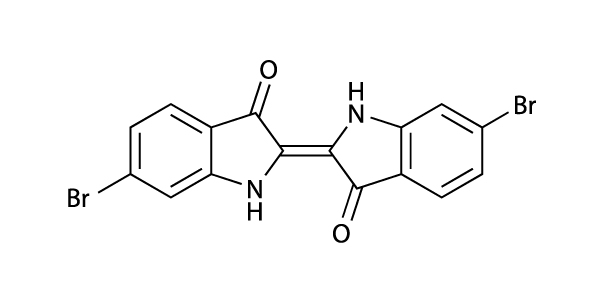 Figure 6: The structural formula of 6,6′-dibromoindigo the main dye component in Murex purple

Reddish purples were created by the Roman artists by heating yellow ochre or haematite to form anhydrous iron (III) oxide (Fe2O3), which is only purple because of large particle size and difference in light diffraction.

The Romans could also create purple by mixing red haematite with Egyptian blue, or mixing the organic dyes of madder and indigo.

Green was derived from various sources. The most commonly used green pigment was ‘green earth’, a siliceous mineral found around Verona and on the island of Cyprus in the Troodos mountains. It could be prepared by mixing two clays; celadonite, found in weathered volcanic rocks and glauconite, a sedimentary rock. The Romans knew ‘green earth’ as cretavitridis (literally green clay or green chalk) and the Greeks, who also used it, knew it as theodotion after the place it was found. ‘Green earth’ was also used as a substrate for green lake pigments and since the clay was already green the colour was enhanced by the dye.

Other sources of green were the mineral malachite (copper (II) carbonate (CuCO3), or by mixing yellow ochre and Egyptian blue.

A synthetic green pigment was prepared from verdigris and other pigments derived from the corrosion of copper in an acidic environment.

Yellow was derived either from the mineral goethite or yellow ochre (iron (III) hydroxide, Fe(OH)3), from the mineral orpiment (arsenic sulphide, As2S3) or the rare yellow mineral massicot (lead (II) oxide, PbO) found near Aachen, Germany. Yellow lead could be made by carefully heating and cooling lead oxide, but there is little evidence of this in the Roman world.

More recently another mineral has been identified in a yellow wall pigment; that of hydroniumjarosite (Fe3[SO4]2[OH]5.2H2O). This is a form of the weathered iron sulfide mineral jarosite, which is found in Poland.

Pliny and Vitruvius list many white pigments. Many are ‘earths’ but a few are minerals.

The minerals that are cited and have been found are chalk, limestone (in a number of forms such as dolomite, aragonite and diatomite) and shells, all mostly calcium carbonate (CaCO3), found all over the Roman world. These have been used as pigments, extenders to lighten the pigment and as substrates for making lake pigments.

The ‘earths’ come from places like Greece, Libya and Turkey and include such substances as china clay, kaolinite and montmorillonite (fullers earth).
White was also manufactured by treating lead with vinegar (ethanoic acid) to form basic white lead; a complex of lead carbonate and lead hydroxide (2PbCO3.Pb(OH)2).

Another white, called ‘ring white’, was a mixture of chalk with crushed glass. According to Pliny the name derives from the fact that the stones in the rings of the ‘vulgar classes’ were made from this glass.

Soot was cited as the best source for a black pigment. The origin could have been burnt bone or ivory. Coal was also used. But the only mineral used was pyrolusite, manganese oxide (MnO2), which is found in Cyprus, Germany and the Czech Republic.

The Roman artists were very adept at mixing colours to produce other secondary and tertiary colours, and it is in this way they obtained many purples, browns and greens. They were also expert at extending expensive pigments by mixing them with cheaper similarly coloured pigments so we often find cinnabar mixed with haematite to create red.

Just how extensive Roman trade routes were can be seen from the map, Figure 7: 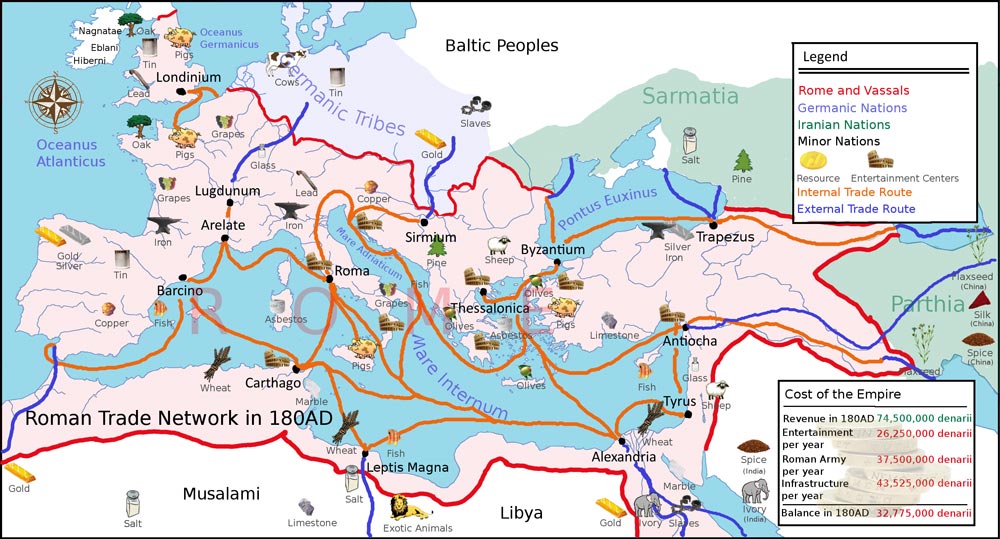 Many of these minerals and ores came from the Near East or Spain. For example, the best ochre came from a Greek colony on the Black Sea where the modern city of Sinop in Turkey is located. The trade was carefully regulated, making it expensive to import a pigment. For that reason, many pigments such as the Sinop ochre, were formed into pellets or cakes and marked with a special seal. The colour became known as Sealed Sinop, and later the Latin and Italian name sinopia was given to wide range of dark red ochre pigments.

Evidence of this trade has been found in many shipwrecks but a notable one was the wreckage of ship sunk around 47 BCE. The cargo indicates that it had sailed from Brindes, modern day Brindisi on the heel of Italy (it contained amphorae of wine from this area) round to Puteoli (Pozzuoli, near Naples). While there, it may have been exchanged for some wine for pigments from the Puteoli factories before setting sail again, this time for Narbo Martius (modern Narbonne), a Roman port in Narbonensis, Southern Gaul (France). From the wreck, divers have recovered amphorae containing the following pigments:

In identifying the origin of pigments, impurities are important since they help to locate the geographical area. Transportation of pigments was expensive and soon local artisans began to make their own through the migration of people carrying the knowledge from one area to another. The production of white lead (also known as ceruse) began in Greece but travelled to Italy, especially around the Venice area, while the manufacture of Egyptian Blue moved from Alexandria to Naples and then to Gaul.

Some rare minerals like cinnabar (mercury sulfide) or lapis lazuli had to be mined and transported making them even more expensive. Cinnabar was found in Almaden, south of Madrid in Spain. In Roman times it was mined and transported to Rome under armed guard where it was sold for very high prices. Lapis was traded along the trail from Afghanistan through the Near East to Europe.