Roman glass and its chemistry

Roman glass is found all over the Roman Empire, but how different is it?

A few examples of portraits from the later empire have survived which were painted onto glass, some of which are considered very realistic.

The volcanic glass obsidian was used by Palaeolithic peoples as a cutting material, but the technique of actually making glass probably started in northern Syria as a by-product of making metals. Small glass beads were produced and have been found as far back as the Bronze Age. Glass was known to the Egyptians but the Greeks developed the making of glass. The word glass (Latin glesum) developed in the Roman Empire possibly at Trier (now in modern Germany).

Early Roman glass was produced by ‘slumping’, a technique in which items are made in a kiln by means of shaping glass over moulds at high temperatures. Shaping a glass sheet over a core or former could be used to produce open vessels, such as bowls and plates. The result was a vessel with rough surfaces, which would be ground or polished to a smooth finish. Pillar-moulded bowls utilised a slotted tool to impress ribs on the glass sheet prior to slumping. The result was a bowl with a ribbed exterior, which was polished and sometimes cut with horizontal lines on the inside for further decoration.

Ancient Roman glass can be classified as soda-lime glass. It was made from silicon, sodium and calcium oxides, with the addition of potassium, magnesium and aluminium oxides. In some Roman glass there’s a characteristic pale blue-green colour caused by iron oxide; an impurity.

Links between Roman and modern glass

Modern glass owes much to the Roman glass technology. The principle of making glass relies upon the fusing of two primary ingredients; silica and soda. Yet glass contains much more and archaeological analysis indicates the presence of three possible components:

Around the 1st century BCE, during the spread of the Roman Empire through the near east and Egypt, there was a great innovation - that of glass blowing. The migration of people skilled in glass-working enabled the rapid spread of glassblowing techniques across the Roman Empire. It allowed greater flexibility and increased the speed of production. This made glass items competitive with pottery items, leading to a higher degree of artistic freedom. It led to the mass production of this luxury material to imitate precious metal vessels.

Most glass vessels found in the Roman colonies in the British Isles were likely to have been imported from other areas of the Roman Empire. Despite its fragility enough fragments have been found at Roman sites to allow art historians and archaeologists to develop an insight into Roman glass. 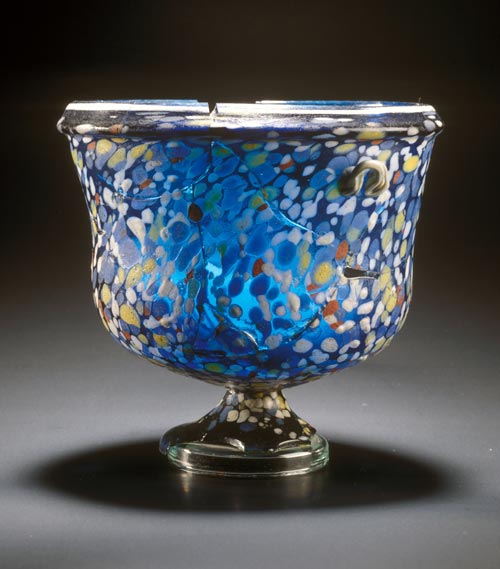 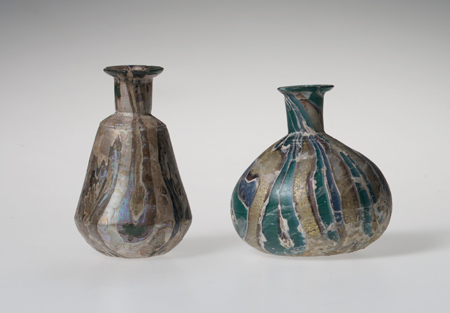 Many of these techniques can still be seen in high-class glass objects such as those found on the Venetian island of Murano, famed for its glass works.

Vitreous enamel is a material made by fusing powdered glass to a substrate by firing, usually between 750 and 850°C. In this process the powdered glass is placed on the glass or metal inside a restraining structure, or on a freehand drawing incised on to the glass. The enamel powder was either powdered coloured glass or colourless glass mixed with a coloured pigment. It is then heated so the powder melts and flows to fill the restraining structure. The temperature is important when enamelling glass since the artist does not want the glass to melt as well. It is allowed to cool slowly and it forms a hard, smooth, durable glass coating. The Romans used to decorate glass by enamelling.

Another technique used by glass workers was to sandwich glass with a design painted on it between two pieces of fused glass known as gold glass. This had been used by the Greeks but was developed by the Romans to create markers for graves in the Catacombs of Rome. The majority are Christian and come from the 4th century CE though there are some pagan and Jewish examples. The technique was also used to create gold tesserae for religious mosaics.

The case of the Lycurgus Cup

It has been noted by scientists working in museums that the Romans fashioned their glass ware in such a way they could be described as nanotechnologists. For example, studies on the Roman chalice known as the Lycurgus Cup at the British Museum has indicated it could be the key to a new technology that might help diagnose human disease or pinpoint biohazards at security checkpoints (Smithsonian magazine, September 2013).

The glass chalice, known as the Lycurgus Cup because it bears a scene involving King Lycurgus of Thrace, appears jade green when lit from the front but blood-red when lit from behind.

© The Trustees of the British Museum

This special property puzzled scientists for decades after the museum acquired the cup in the 1950s. The mystery wasn’t solved until 1990, when researchers in England scrutinised broken fragments under a microscope and discovered that the Roman artisans were nanotechnology pioneers.

The glass-maker had impregnated the glass with particles of silver and gold, ground down until they were as small as 50 nanometres in diameter, less than one-thousandth the size of a grain of table salt. The exact mixture of the precious metals suggests the Romans knew what they were doing.

When hit with light, electrons belonging to the metal flecks vibrate in ways that alter the colour depending on the observer’s position. Modern home pregnancy tests exploit a similar nano-based phenomenon to turn a white line pink.

If you would like more information then see the BBC Radio 4 Podcast - Science of Glass.