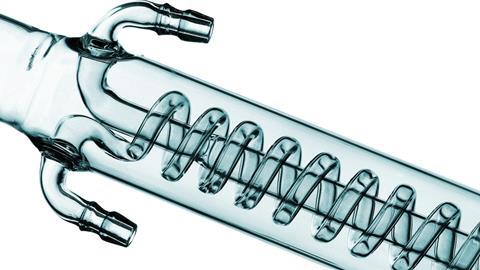 How to develop your students’ distillation knowledge and practical skills 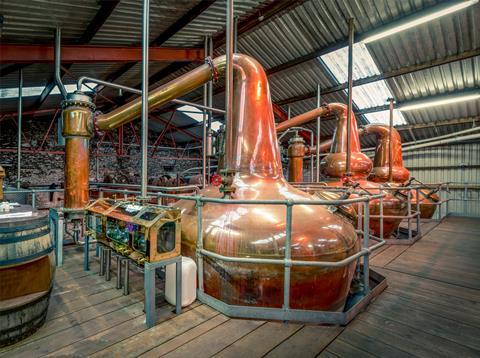 The distillation of mixtures to separate and purify substances is an ancient technique, and one that underpins modern society. It produces alcoholic drinks and the fuels that power our vehicles, and even keeps medical scanners working. Distillation is found throughout industry.

The many uses of distillation provide a rich source of stories to frame teaching. For example, the water cycle is effectively a giant distillation cycle and can be linked into many stages of students’ education. Areas of the world without access to fresh water that need to produce potable water provide opportunities for discussing the social and environmental aspects of science.

Society heavily relies on refined products of crude oil, along with substances separated from air by fractional distillation, and this gives context for discussions of distillation’s economic aspects. Useful products from air include nitrogen, oxygen and the noble gases, which are used extensively in medicine, industry and research. For example, liquid nitrogen keeps stored biological samples cool while liquid helium keeps MRI scanners at a cold working temperature. Oxygen and argon blow in the basic oxygen steel-making process and krypton lasers produce microelectronics. Steam distillation is also used to purify compounds that are part of many consumer products, including fragrances and foods.

Framing the topic in relevant contemporary contexts helps students appreciate the applicability of a science education for all, not just for those seeking a scientific career.

Building on other concepts

Distillation combines two fundamental physical processes: evaporation and condensation. Students meet these ideas early on and they provide the foundation for progression to fractional distillation. 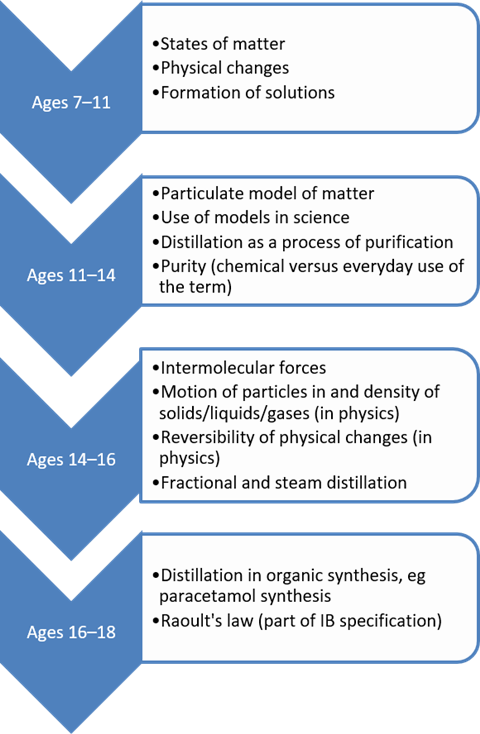 Progression of concepts related to distillation

Making links between physical state changes and the everyday experiences of students can help them bridge the conceptual divide between the macroscopic world and the abstract sub-microscopic and representational models we are trying to help them build. For example, evaporation can be distinguished from boiling by reference to the drying of puddles. The bathroom mirror after a hot shower is an everyday encounter with condensation. Additionally, the concept of purification can be consolidated using simple investigations, such as the ‘Desert survival practical’ that challenges students to recover their last precious water spilled on the sand before they dehydrate.

The particulate nature of matter is a key idea students have to master to fully appreciate many aspects of chemistry, including distillation. Carefully used models can help students with misconceptions around the particle model (find out how to use models in chemistry teaching with an earlier article in this series: rsc.li/2xzDLGY.)

The particulate nature of matter is a key idea students have to master to fully appreciate many aspects of chemistry, including distillation. Carefully used models can help students with misconceptions around the particle model.

Students build a more comprehensive and integrated understanding of the subject, rather than a collection of isolated facts, by making links between concepts in chemistry. For example, one limitation of the particle model is the lack of consideration of forces between particles. This can be discussed in the context of the energetics of distillation, eg why different substances have different boiling points.

Find out how distillation fits into the National Curriculum, and GCSE and A-level specifications on the Education in Chemistry website: rsc.li/EiCdistillation.

Distillation practicals require accurate observation, measurement and manipulative skills to set up and use the increasingly complex apparatus (find out how to develop your students’ observation skills with an earlier article in this series: rsc.li/2gMEM7v.)

Distillation practicals require accurate observation, measurement and manipulative skills to set up and use the increasingly complex apparatus.

Students aged 7–11 can be introduced to measuring temperature using both digital and analogue thermometers. A simple experiment looking at the three phases of water is a suitable activity, and can reinforce the difference between evaporation and boiling. In schools where practical work is limited by lack of equipment, a more Heath Robinson style could be used. For example, making a simple solar still to produce distilled water in the school grounds gives students a relevant context to consolidate their understanding.

At age 11–14, students can carry out simple distillation of copper sulfate solution using side arm boiling tubes, or conical flasks/boiling tubes with the delivery tube passed through a bung. The benefits of a coloured solution are the colourless distillate, and the deepening colour of the original solution as the solute becomes more concentrated.

Whether a liquid is pure could be investigated by measuring its boiling point, although the boiling point elevation tends to be small. A simple conductivity meter can demonstrate the relative purity of the distillate over the original solution. A demonstration of the elevation of boiling point may be better. A saturated sugar–water solution has a boiling point of around 110°C. Students will be able to see the boiling temperature more clearly from a digital thermometer or data-logger. This demonstration has the added benefit of showing the very high solubility of sugar. Sugar crystals can be produced from the resulting concentrated sugar solution, and this links to crystallisation as a separation technique.

While simple distillation is relatively straightforward to set up, reasonable results need patience from students. Some common issues have simple solutions:

More advanced learners, aged 14–16, can repeat simple distillation to consolidate understanding and skills, for example with a fluorescein solution, which becomes more vividly green as the colourless water distils off. Simple fractional distillation can be carried out using synthetic crude oil. A fractionating column is not needed as the various components have sufficiently different boiling points (>25°C between the boiling point of each fraction). Equally, classes can distill limonene from orange peel [doc], or other fragrant compounds [pdf].

As schools are unlikely to have sufficient kit or the desire for under-16s to handle Quickfit glassware, demonstrate distillation using a Liebig condenser instead. Fractional distillation of synthetic crude oil with a fractionating column could also be shown as part of a general discussion about different methods for achieving similar outcomes.

Download slides containing these images of three methods of separating crude oil for use in your classroom: rsc.li/EiCdistillation

Download slides containing these images of three methods of separating crude oil for use in your classroom (ppt or pdf).

At 16–18 years old, students are expected to carry out a simple distillation with QuickFit apparatus. This is usually in the context of purifying products or intermediates in organic synthesis. If the equipment is available, students could also use a fractionating column with a simple mixture, eg propan-1-ol (bp 97°C) and 2-methyl-propan-1-ol (bp 108°C). Additionally, students should have the opportunity to use heating mantles if available. At undergraduate level, aluminium heating blocks (eg DrySyn blocks) on hot plates are the most common heating method. Nowadays, oil baths are rarely used. 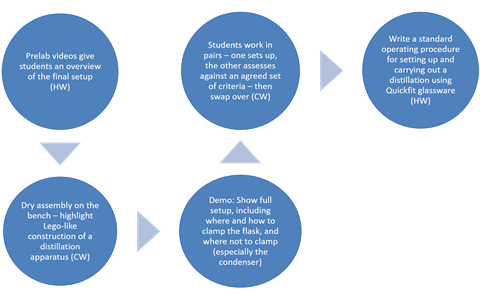 Many of the ideas in this article will also be useful for other separation techniques, such as evaporation, crystallisation and filtration, which will be covered in a later article in this series.

David Paterson is a chemistry teacher at Aldenham School, Elstree