Demonstrations to capture the student's imagination, by Declan Fleming of Pate's Grammar School, Cheltenham.
In this issue: Catalytic copper

Curricula for 14-16 and post-16 students usually involve some reference to heterogeneous catalysis in the gas phase. The 'go-to' demonstration for this is the oxidation of ammonia.1 Ammonia is presumably chosen for the curriculum connection to the Haber process. However, the demonstration requires the use of platinum wire, which many schools have only in very small quantities due to its cost.

The oxidation of acetone (propanone) is a similar demonstration, which requires no additional oxygen supply. It involves readily available copper that can be used in larger quantities to dramatic effect. 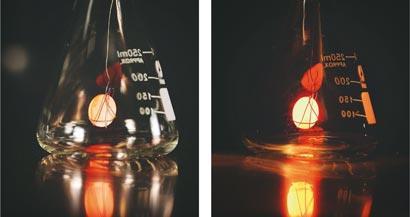 Place a 250 cm3 conical flask on a heat resistant mat. Add acetone to the flask to a depth of 5 mm (approximately 30 cm3 of acetone). Trim a sheet of copper foil and bend it to hook over a glass rod. Check that when the copper foil is lowered into the flask it is held approximately 2 cm above the base.

Heat the copper directly until it is red hot, then lower it into the conical flask. Waves of colour will ripple across its surface as it catalyses the oxidation of the acetone. The effect is emphasised if the lights are turned off and the copper will continue to glow as long as there is a supply of acetone vapour.

The objective in this experiment is to demonstrate heterogeneous catalysis. The copper catalyses

the formation of ketene (ethenone) and methane.

The ketene and methane are oxidised (and presumably some acetone is directly oxidised as well), providing the necessary heat to keep the copper glowing.

The role of oxygen in the reaction can be shown by covering the top of the flask with a heat resistant mat: the copper will quickly cool and dim. The effluent gases have been shown by infrared spectroscopy2 to mostly consist of carbon dioxide and water, with small amounts of ketene.

If you find the copper does not sustain the reaction, it is likely that its position in the flask is incorrect to allow efficient mixing of the acetone and oxygen - try raising or lowering the copper. Thin copper foil used for electrodes often cools too quickly to maintain the reaction. It is possible to leave the flask reacting for the whole lesson and weigh the copper at the end to show that none has been consumed in the reaction.

An interesting point to draw the audience towards is the yellow colour of the copper that is seen when it is heated in the reducing gas mixture. In the absence of any oxides on the copper surface, its colour is closer to that of gold.

This demonstration can also be performed with a coil of copper wire or with a copper coin held in a cradle of nichrome wire. The latter has the advantage of a good heat capacity to ensure the reaction is sustained. However, it is less impressive for showing the waves of colour changes on the surface of the copper as it finds itself under alternating oxidising and reducing conditions.