The real reactivity of aluminium

Could a broken thermometer bring down an aircraft?

This demonstration came about as a result of a question put to me by one of my students who asked: 'Could a broken thermometer bring down an aircraft?'.

Aluminium is soft, lightweight and ductile with excellent thermal and electrical conductivity. It is highly reactive, though the metal is protected by a surface layer of inert transparent oxide (Al2O3) that forms rapidly in air, providing excellent corrosion resistance. With these properties, and by enhancing its strength by alloying with other metals, aluminium has many applications ranging from cooking foil and utensils, through overhead power cables, to aircraft components. 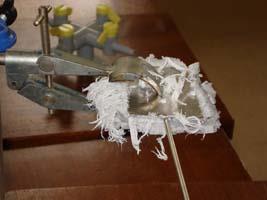 This demonstration must be done in an enclosed fume cupboard. To remove the oxide layer from the metal, put the aluminium sheets in a beaker containing 2 M hydrochloric acid for about a minute - bubbles of hydrogen should be seen as the reaction takes place. Using tongs, remove the aluminium sheets from the acid bath and transfer them to the beaker of mercury. The aluminium will float so use the tongs to submerge the sheets for ca 30 s.

Remove the aluminium sheets from the mercury and position these either side of a temperature probe clamped in a horizontal position and connected to a data logger set to record temperature as a function of time. Clamp the sheets so that they sandwich the probe; once secure close the fume cupboard window.

With the oxide layer removed, the mercury can form an amalgam with the aluminium. When amalgamated, the aluminium at the surface of the sheets is exposed to moisture in the air and reacts vigorously:

The reaction produces hydroxide1 which forms as white feather-like growths, and leaves the mercury behind to amalgamate with the fresh aluminium surface below. Hydroxide formation continues until either the aluminium is used up or until all of the mercury in the amalgam is lost in the compounds produced.

Safety goggles and protective gloves must be worn. Mercury is toxic by inhalation and there is a danger of cumulative effects. The preparation and use of mercury and mercury compounds must be done in an enclosed fume cupboard in a well ventilated room. A mercury spillage kit should also be available. You must recycle mercury after use. Mercury should be stored in a plastic bottle and transferred to and from the beaker over a wooden or plastic tray that could contain any spills. Because of its density you may find 100 ml of mercury difficult to handle. You may find it especially difficult to pour mercury from the 1000 ml beaker back into the bottle. It is easier to transfer the mercury to a smaller 250 ml beaker, and then pour back into the bottle using a funnel. Do not throw the treated aluminium in the rubbish bin. It may continue to react exothermically and ignite other rubbish. 2 M HCl is an irritant. Rings should be removed, if possible - mercury amalgamates egwith gold, turning rings 'silvery'.

The inert layer of Al2O3 often misleads students into the belief that aluminium is not as reactive as its high electrode potential suggests.2

Demonstrating the effect of removing this oxide layer can help to reinforce the reactivity of aluminium for students studying the reactivity series at KS3, or the extraction of metals at KS4, or at A-level where a discussion of its high electrode potential can be incorporated.

As with most spontaneous processes, the hydroxide formation is exothermic and the plot of temperature versus time follows the rate of reaction nicely. The temperature peaks after ca 13 mins but the reaction continues for many hours after. However, it is unlikely that a drop of mercury could find exposed aluminium, stripped of its oxide layer and cause enough damage to bring down a plane.

Our Nuffield practical collection includes an experiment exploring the reaction between aluminium and copper(II) sulfate, which may be used as a class practical or demonstration.