Use this practical to explore the changes in the colour and consistency of sulfur as you heat it, melt it and eventually boil it

In this experiment, students observe what happens when sulfur is heated slowly and steadily from room temperature until it melts and boils.

All the observed changes in properties can be related to the different structural forms of the three solid sulfur samples (allotropes). Students can see how these changes in structure occur as the temperature of the liquid sulphur is gradually raised.

The practical is described here as a demonstration. However, some teachers may wish to consider whether certain parts could be used as class practicals with appropriately skilful and reliable classes.

A demonstration, without any accompanying discussion about the possible reasons for the changes in properties in terms of structure, would take up to 45 minutes. However, to derive maximum benefit from the experiment, more time needs to be allowed for such discussion. 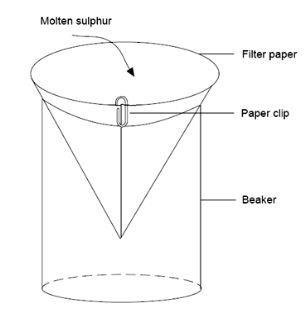 The apparatus required for preparing monoclinic crystals from molten sulfur

Some stages of this demonstration are time-consuming, eg melting the sulfur in the oil bath, dissolving the sulfur in dimethylbenzene, and evaporating the solvent. Some teachers may prefer to melt some sulfur before the lesson and to prepare rhombic crystals before the lesson to save time. In the latter case, slower evaporation (which can be brought about by covering the petri dish with filter paper with a few holes in) will produce larger crystals. Particularly large and/or well-formed crystals could be retained as examples for future use.

Monoclinic crystals can be formed by allowing a hot solution of sulfur in boiling dimethylbenzene to cool so that crystallisation starts at above 96 °C.

Carbon disulfide has been use in the past as a better solvent for making rhombic sulfur, however its smell, toxicity and high flammability make it unsuitable for use in schools – see CLEAPSS Hazcard HC020b.

Very slow heating is essential if all of the changes on heating sulfur are to be seen clearly. Sulfur is a poor thermal conductor, hence the changes can overlap one another if the heating is too fast. It is difficult to heat slowly enough using a Bunsen burner – hence the use of an oil bath.

Crystalline sulfur consists of puckered S8 rings in the shape of crowns. These can be packed together in two different ways – to form rhombic crystals and to form needle-shaped monoclinic crystals, as shown below:

Below about 96 °C, rhombic sulfur is the more stable allotrope. On melting at about 118 °C, sulfur first forms a mobile, amber liquid containing S8 rings. If this is allowed to cool, monoclinic sulfur forms as crystallisation occurs above 96 °C.

Monoclinic sulfur will turn slowly into the more stable rhombic form on standing below 96 °C.

Further heating of the S8-containing liquid breaks the rings into S8 chains. These may join to form longer chains which tangle, causing an increase in viscosity. At higher temperatures, these chains break into shorter ones, perhaps as short as S2, and the viscosity decreases again.

Rapid cooling of this liquid traps the resulting solid sulfur in the tangled chain state – this is plastic sulfur. On stretching, the chains uncoil and on releasing the tension they return to the partly coiled state (see the diagram below).

If solid sulfur is formed below 96 °C by crystallisation from a solution, the stable rhombic form is produced. 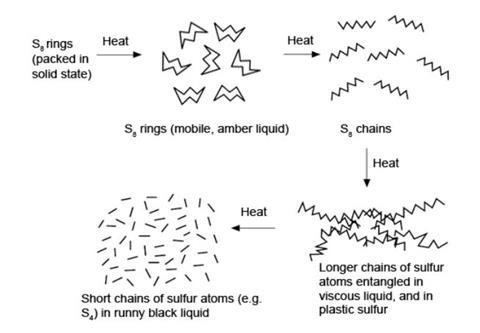 By steadily heating sulfur until it melts or boils, we can produce allotropes with different structures and properties

The experiment is also part of the Royal Society of Chemistry’s Continuing Professional Development course: Chemistry for non-specialists.