Try this practical to test the corrosion of metals in dry air, moist air and air polluted by acidic sulfur dioxide

In this experiment, students place a range of metals in three identical containers with airtight lids. The three containers are set up with different atmospheric conditions, including dry air, moist air and air polluted by sulfur dioxide.

Students observe the corrosion of each metal under the three different atmospheric conditions over a number of days. They may then investigate possible ways of preventing corrosion in one of the metals they found corroded in an acidic atmosphere.

This is a straightforward class investigation in which metal corrosion trials are set up in one lesson and left for a week or more, with intermittent observations recorded in each subsequent lesson until a clear pattern of corrosion differences between the selected metals has been established. Each working group may be given an opportunity to select the range of metals it uses for this stage, provided that the science department can provide a wider range to choose from. Otherwise, the essential basic range is given in the health, safety and technical notes below.

The size of each working group may be determined by the availability of apparatus. A large group (say 6–9 students) might be divided into three sub-groups, each setting up one experimental box with different conditions. Alternatively, smaller groups may each prepare a set of all three boxes. Whatever approach is chosen, at least two boxes should be set up for each atmospheric condition.

This can be followed by a second investigation into ways of preventing corrosion of those metals which have been significantly affected. This investigation will also require monitoring over a period of a week or more in the same way as the first stage. Each working group may be asked to select one metal which corroded significantly for investigation.

The final stage is the writing of an investigation report by each student.

All this will take short periods of time at intervals over several weeks. The setting up of the first stage should take about 30 minutes, and the observations and recordings in subsequent lessons should not be allowed to take more than five minutes on each occasion. The second stage, with the formulation of a method of investigation, will again probably take about 30 minutes to set up, with five minutes allowed for observation and recording in each subsequent lesson. 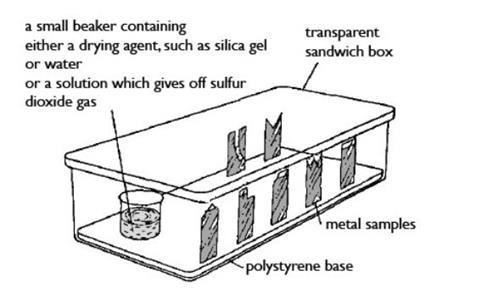 Students will need some prior introduction to the topic of corrosion by atmospheric pollutants, and appropriate photographs of damaged stonework as well as metal structures could help to set the scene. They may well already know that sulfur dioxide is a recognised source of atmospheric pollution, and that it comes from the burning of fossil fuels which contain sulfur compounds. However, this is likely to be the first time they have looked at this problem in detail.

When setting up the boxes, those using sulfur dioxide solution must be frequently be reminded not to inhale the fumes, and to use the fume cupboard properly. They should be aware that there is a particular danger for asthmatic people. At the end of the investigations open these plastic boxes in a fume cupboard to dispose of the solutions with plenty of water. Remind students that the concentration of sulfur dioxide in the box atmosphere is likely to be much higher than in the atmosphere itself, even in areas of high pollution.

The setting up of the boxes containing metal samples under different conditions needs careful planning, appropriate to the class concerned. The length of time the samples are left to corrode needs to be flexible – the time needs to be sufficient for clear results to be obtained, and this is likely to take at least a week, possibly two or more weeks.

The students should be asked to plan the recording table for stage 1 as a class, so that they use a common format. It is likely that by the end of the investigations, results will have to be shared. A format similar to that below is likely to be agreed:

In stage 2, students are likely to suggest a wide range of ways of preventing corrosion, some of which will not be practicable for the class. The range will have to be narrowed down before they start to methods such as:

Some groups in stage 2 may wish to investigate prevention of rusting by damp air, rather than by an acidic atmosphere of sulfur dioxide. A possible variation may be for some groups to use an acidic pollutant other than sulfur dioxide, such as dilute hydrochloric acid (1.0 M), and compare it with sulfur dioxide.

Students should be reminded to consider including unprotected control samples in their Stage 2 investigations.

The effectiveness of the prevention of corrosion by covering with a barrier layer will depend on both metal and barrier. Paint is an obvious example, as effective painting of metal object usually involves several coats and different types of paint. Plastic films (or sealing in a plastic bag) will slow down the rate of corrosion, but eventually enough sulfur dioxide will diffuse through to cause corrosion.

Electroplating will have to involve commercial pieces of electroplated metal, such as a chromium-plated steel object, an electroplated nickel-silver (EPNS) teaspoon, or a zinc coated iron object, such as a piece of galvanised sheet or a zinc coated nail. The difficulty may be finding objects small enough to place in the boxes without cutting them, which would expose the steel beneath the plating. Another variant would be anodized aluminium.