The experiments in both parts demonstrate the greenhouse effect by comparing the temperature increases in suitable vessels containing the gases, on exposure to light from a powerful lamp.

Each part of the demonstration will take about 30 minutes. However, the second part can be started well before the first part has been completed if sufficient apparatus is available.

The experiments involve slow, gradual temperature increases. If the temperatures are monitored electronically, with data logging and a live display, the experiment can be allowed to proceed while the class carries on with other work. If ordinary thermometers or electronic thermometers with digital displays are used, the temperatures will have to be recorded at one minute intervals, requiring the attention of the class to time and record for the duration of the demonstrations. 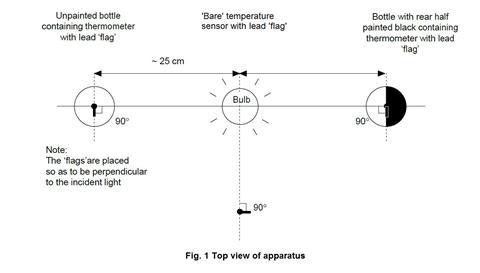 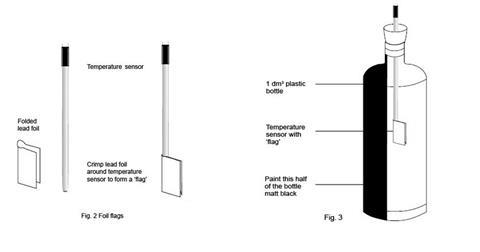 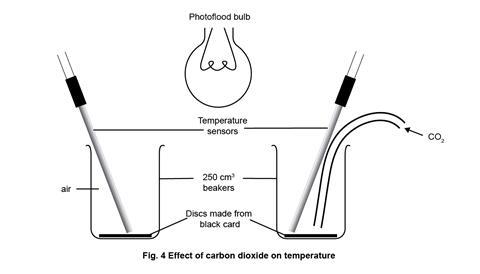 However, in addition the warm surfaces re-radiate some of the absorbed energy, but at longer wavelengths in the infrared region of the spectrum. Some of this infra-red radiation is absorbed by glass and contributes to the warming of the greenhouse. It is this latter effect that is called the ‘greenhouse effect’. The greenhouse effect in the Earth’s atmosphere is caused by a number of gases that behave in a similar way to glass. They are transparent to visible light, but absorb in part of the infrared spectrum. Some of these gases are listed in the table. It can be seen that carbon dioxide is the most important greenhouse gas because of its relatively high concentration in the atmosphere rather than its intrinsic greenhouse efficiency.

In part 1, the experiment demonstrates the situation in a greenhouse using a plastic bottle. It also shows the effect of a black surface absorbing the energy from visible light.

In part 2, however, replacing the plastic bottles with open beakers removes the restriction on convection. The difference in temperature rise between the two beakers comes mainly from absorption by the gases of the radiant (infra-red) energy from the lead discs at the bottom of the beakers

Water vapour, carbon dioxide and ozone are the most important of the greenhouse gases, the first two because of their relatively high concentration in the atmosphere rather than because of their intrinsic greenhouse efficiency – indeed water vapour accounts for more than a third of the overall greenhouse effect. However, methane also makes a significant contribution, and it is the increasing proportion of carbon dioxide, and to a lesser extent methane, that seems to be producing the effect of global warming.