4D printing: the next dimension 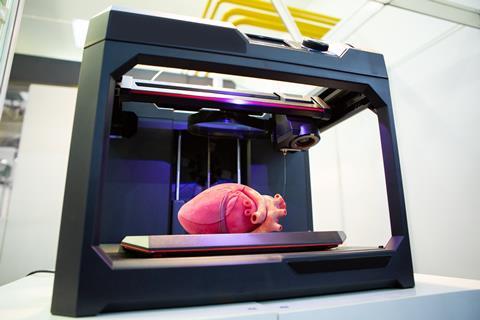 3D-printed organs may become a reality in our lifetimes – but what about 4D printing?

In the back pages of a 1974 October issue of New Scientist, readers were treated to this intriguing paragraph opener in the weekly column, Ariadne: ‘This week my polymoptic friend Daedalus continues his musings on new plastics fabrication.’ In this sentence alone, there are several signs that what is coming up is science fiction. Polymoptic isn’t a real word. Daedalus is a fictional scientist, founder of the likewise fictional and morally corrupt company, DREADCO. In the rest of the paragraph, this made-up character becomes the first person to suggest what will become known as 3D printing a full decade later. 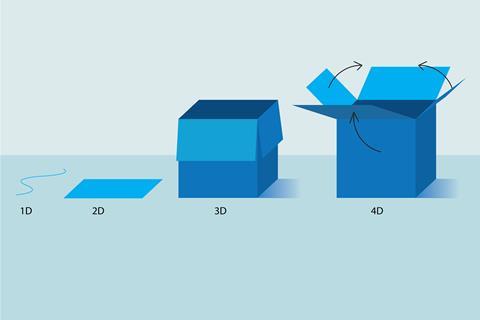 ‘Under programmed numerical control, the beams could reproduce any number of identical objects once the design had been optimised – silent, one-step, infinitely flexible mass production!’ continues chemist David Jones, the man behind Daedalus and DREADCO, in the earliest recognition of what could be achieved if we could print objects rather than just words. While 3D printing wasn’t his craziest thought experiment (space elevator anyone?), it’s arguably the most useful. And it’s leading a revolution.

We can now print everything from cars to family homes, realising Daedalus’ vision of infinitely flexible production. But what even he couldn’t have foreseen is how 3D printing is now no longer reserved for hard plastics. Material chemists have continued to develop the technique, bringing us closer to a world where anything we can design on a computer, we can print in the lab. Even if that ‘anything’ is soft, squishy – and changing shape.

This article provides an excellent opportunity for pupils to consider novel uses of polymers in 3D and 4D bioprinting. It links well to their study of natural polymers such a proteins and condensation polymers.

‘Fused plastics … are quite well behaved and it’s easy to control them,’ says Annela. But what if you want to print something that isn’t made of plastic? A growing number of scientists are focused on printing objects that are similar to biological tissue. This technique is called bioprinting. For that, they need a new set of printable materials. ‘Materials that are kind of soft and squashy,’ Annela says. ‘You can imagine that they might have applications within the body.’ 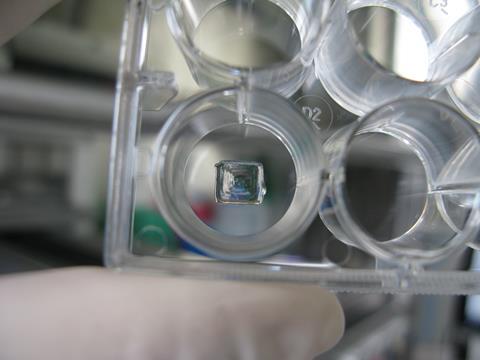 Such materials are often natural in origin: gelatine, cellulose and alginate, which comes from seaweed. However, soft materials are more hassle than plastics. ‘Every time you develop a new soft material to print, you have to do a battery of tests to make sure that it’s able to be printed,’ Annela says. ‘The material has to be able to be extruded through a nozzle to print, but they also have to not be a liquid so that they don’t run away.’

With the addition of live cells, those soft materials become bioinks. This makes scientists able to print something akin to biological tissue. ‘What appears in the first instance is a sort of jelly with isolated cells,’ explains Brian Derby from the Henry Royce Institute, the UK’s National Institute for Advanced Materials Research and Innovation at the University of Manchester. The cells begin to pump out proteins into the jelly, making it like an extracellular matrix, which is the goo that cells sit in in regular tissue. ‘You end up with something people call proto-tissue which can survive on its own.’

The ultimate goal is to print organs – to test drugs without using animals and to combat the long organ donation waiting lists. But, says Brian, we’re not close yet. ‘Skin is an organ but I don’t think anyone has printed skin which has hair follicles and sweat glands in it.’ There are some cool steps forward though, such as the 2019 non-beating mini heart. However, it is estimated it will still take at least another couple of decades before we can print fully operational organs, like livers and kidneys, and transplant them into animals.

A worksheet activity exploring the chemistry of some of the polymers used in 3D and 4D printing for ages 16–18 from the Education in Chemistry website: LINK

Putting stuff into a growing body can be troublesome. The 3D-printed tissues and organs of the future must be able to adapt to the body after transplantation, as must other bioprinted objects that contain no cells, like prosthetics or medical implants. That change must be engineered somehow. The solution can be found in so-called 4D printing.

‘What [scientists have] done is create something that has the ability to change with time,’ Annela says. Where normally whatever you’ve printed will stay put, 4D-printed materials will sit and wait for the trigger to change. ‘The material is fixed in one state until it’s hit with a particular stimulus and it responds to the stimulus by changing.’ It can be a certain temperature, a spray of water, laser light or a small electric shock. Or it might simply be a specific amount of time passing. Once the trigger is pulled, the object will begin to change.

Taking its own time: how a 4D printed structure folds itself over time after being placed in water

It turns out that this ability is less about what your object is made of, and more about how it is made. ‘Think about a person: you’ve got skin, you’ve got bone, you’ve got hair, you’ve got organs,’ Annela says. ‘If you look at the elements that they’re made of, it’s quite a small number: carbon, hydrogen, nitrogen, oxygen. Things like skin, the way their elastic properties work is down to the structure, not the individual building blocks.’ The easiest way to imagine this, Annela explains, is by thinking of a pine cone, which is made of cellulose. ‘The cellulose fibres in the pine cone are all aligned in the same direction,’ she says, ‘so when the pine cone takes in water, the cellulose fibres swell and because they’re aligned in one direction, the pine cone opens. And then when they dehydrate, the pine cone closes.’

This means that if scientists can control the alignment of their 3D material and stimulate it, they can control in which direction their object will change shape. In other words, the difference between the pine cone and the 4D-printed, lab-made objects is that the change doesn’t just happen, it is carefully planned for by the scientists. Because of this, 4D-printed materials are often called ‘programmable’, which is a key feature if we are to predict the outcome of 4D-printed implants in the body.

Programmable 4D printing is already changing lives. One thing that doctors are endlessly trying to fix in human bodies is bad plumbing. Our bodies are full of plumbing: the windpipe and bronchial tubes, the blood vessels, the oesophagus, the ureter, our intestines. Pipes and tubes are everywhere, and they frequently become blocked. Sometimes, they’re simply weak and collapse. In all cases, passage of fluid or air through these tubes is crucial to the health of the patient, and without intervention, things are likely to go from bad to worse. The standard weapon against this is slightly thinner man-made tubes, which can be slid inside whatever tube needs fixing and allow the air or the fluid to flow unhindered. Such tubes, called stents, can be very difficult to make well, especially if the tube is small and hard to get at, and they often include multiple high-risk surgeries to put them in and take them back out. 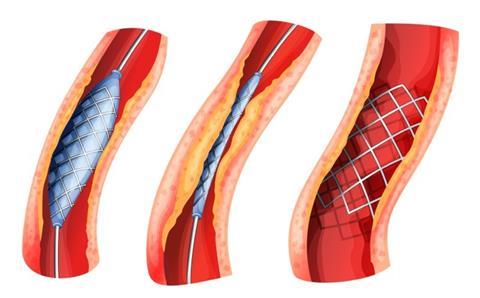 4D printing organs isn’t yet possible, but stents that change shape in situ is already reality

4D printing has now given us an alternative: the splint. If you’ve ever broken a bone, you’ll know the splint as the rigid support to which the bone is tied, helping to keep its shape as it’s healing. By using a tiny, 4D-printed splint, doctors can help with plumbing issues on a much smaller scale. Say you’re a baby born with weak windpipe tubes, whose job it is to direct air from the windpipe to the lung, you might be at risk of them collapsing, meaning you can’t breathe. This terrible condition, called tracheobronchomalacia, often leads to premature death. American baby Kaiba Gionfriddo was born with tracheobronchomalacia in 2012, and it didn’t look like he was going to make it. However, a team of doctors and scientists based at the University of Michigan printed him a unique splint to go over his weak tube, suturing it in place so that it held the tube open.

The splint is designed to change shape as the boy grows, allowing his windpipe to get strong and stable on its own. It will then degrade and resorb back into his body, leaving him with a normal airway. Several more babies have had the same surgery, and all of them are now living healthy toddler lives.

The future of 3D printing in the medical world seems bright. Even if soft materials are more difficult than plastics and we’ve not yet graduated from proto-tissue to full organs, the race to the finishing line has started. ‘Replacement organs, it’s in our lifetime,’ Erik Gatenholm, founder of bioprinting company Cellink, confidently told The Guardian in 2017. Whether or not he is right, progress on simpler systems such as skin or cartilage seems inevitable, as does an ever-expanding toolset of implants that, like Kaiba’s 4D windpipe splint, will help patient bodies to fix themselves. All there’s left to discover is what will be next, and whose life will it save.