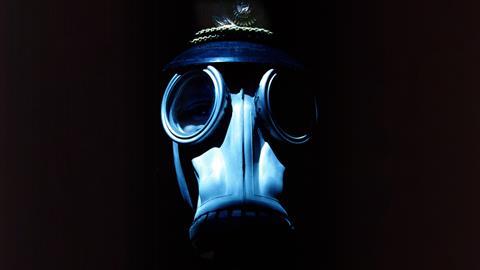 Freeing the world from chemical weapons

Dawn Sturgess’ death near Salisbury, UK, in 2018 was an unusual and scary chemical weapon incident. She died after being exposed to an agent known as ‘Novichok’. The same substance also seriously injured her partner Charlie Rowley, former Russian spy Sergei Skripal and his daughter Yulia.

The incident ‘was a serious violation’ of an international law known as the Chemical Weapons Convention (CWC), explains University of Leeds toxicologist Alastair Hay. The UK has released evidence implicating Russian spies, Alastair says. ‘Of course, Russia denies getting involved,’ he adds. Alastair is an advisor to the international Organisation for the Prohibition of Chemical Weapons (OPCW), based in The Hague, Netherlands, which is determined to abolish such weapons. But Novichok was a new problem for the organisation, which chemists solved.

This article gives an example of the negative impact chemistry can have on society if not closely regulated, and explains the importance of international laws and treaties in controlling the risk. It highlights the key role analytical chemistry plays in monitoring the use of chemical weapons and provides a useful context when teaching analytical techniques such as chromatography and mass spectrometry.

Today only four countries haven’t signed the CWC or adopted it into their own laws: North Korea, South Sudan, Egypt and Israel. The convention requires countries to get rid of their stocks of chemical weapons. They must also destroy equipment used to make chemical weapons, must not produce them or assist anybody else to do so. The OPCW generally recruits citizens from its member countries to do inspection and sampling, Alastair says. ‘Mainly they are chemists, or chemical engineers,’ he adds.

Some teams investigate allegations that chemical weapons have been used, for example in recent horrible cases in Syria. The US and Russia pressured Syria to join the CWC in 2013, after it killed 1400 of its citizens with the nerve agent sarin, Alastair says. The OPCW worked with the Syrian government to remove around 1300 tonnes of chemical weapons and materials that can be used to make them. Yet Syria has repeatedly used chemical weapons like sarin, mustard gas and chlorine gas since it signed the treaty. ‘Syria is in violation of the treaty,’ Alastair says.

The world is their office

OPCW teams more regularly investigate businesses and government sites. ‘The treaty requires countries to declare sites where various chemicals might be used, handled or traded,’ says Alastair. The OPCW visits and audits sites at random. The UK defence research site at Porton Down, near Salisbury, is often visited because it keeps small amounts of chemical weapons for testing protective equipment, Alastair says. In either team, inspectors can take samples and send them for testing in ‘laboratories and countries that would clearly be neutral’, he adds. 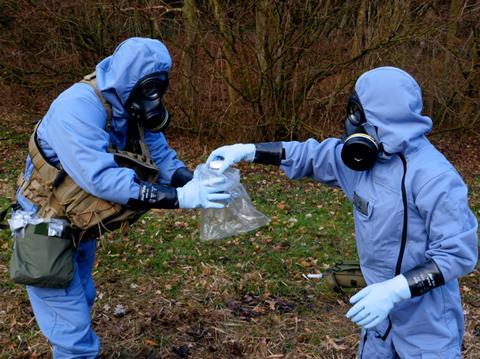 One of 26 OPCW-verified laboratories is Verifin, the Finnish Institute for Verification of the Chemical Weapons Convention, based in Helsinki. When receiving a sample, analysts must first isolate the ‘suspected chemical warfare agent’, says Paula Vanninen, Verifin’s director. The sample ‘can be, for example, muddy water or soil,’ she notes. ‘There can also be samples from victims, for example urine or blood.’ Sometimes, scientists get samples from unused chemical weapons.

Paula’s team refers to the substances they’re hunting as analytes. They can extract the analytes into different liquids. Hydrophobic substances prefer organic solvents like dichloromethane. Hydrophilic substances prefer water. Paula and her colleagues then separate the mixture’s component parts, using techniques like liquid or gas chromatography. In liquid chromatography, analytes pass along tubes filled with materials like silica, known as columns. Different chemicals in the mixture pass down these columns at different speeds, entering a mass spectrometer that determines their molecular weight at the end.

Transferring knowledge between contexts is a challenge for many students. In this worksheet students are required to apply their understanding of a range of topics to answer questions on some well-known chemical weapons: mustard gas, sarin and Novichok. The need to refer back to previous learning and apply it in a new context will help students improve their understanding.

The time it takes analytes to pass through the column is called the retention time, and is an important characteristic, Paula explains. Her team can compare it to known values for declared chemicals. Even if there is no match, they can work out a ‘retention index value’ that gives clues to the molecule’s identity.

Then, mass spectrometry provides further clues, including the suspect substances’ molecular weight, and that of fragments broken off from its structure. These can be ‘like a fingerprint of the molecule’, Paula says. However, some mass spectrometry detectors need molecules to be ionised to measure them. She explains therefore  that the pH conditions used, especially in liquid chromatography, are important. Acidic substances should be deprotonated, and basic substances protonated.

Yet whatever affected the Skripals, Sturgess and Rowley shocked this system. The Novichok substances weren’t on any lists that the OPCW monitored. ‘The UK had to identify the chemical, which it did, very promptly, and declared it,’ Alastair says. ‘OPCW was then called in. The inspectors arrived in the UK, took samples, sent those to designated laboratories. And they confirmed what the UK had declared.’

While the Salisbury and Syria stories are scary, there have been few other chemical weapons incidents. ‘Some 97% of declared chemical weapons have been destroyed,’ Alastair stresses. But he adds that the OPCW also has to prevent their re-emergence, which means emphasising that chemical weapons are illegal. ‘This is part of OPCW’s mission,’ he underlines. ‘It’s ensuring the protection of people and it needs support.’