However, if the particles are made smaller, conductance (or flow) through the column becomes more difficult. HPLC (sometimes called ‘high pressure liquid chromatography’) is operated at pressures in the order of 100–150 atmospheres.

The stationary phase normally consists of silica particles of diameter 10-6 m, the surface pores having a diameter of 10-8 to 10-9 m.

The surface area of the solid is therefore very high, and when coated with a liquid which can interact with the solute particles in the mobile phase, separation of a mixture becomes very efficient indeed.

Flow through HPLC columns is very slow (0.5–5.0 cm3 min-1) so the column must be very short and its volume will consequently be very small. Micro syringes are used to inject a sample and must be very precise.

In addition sophisticated pumps must be used to produce accurate and reproducible flow rates. Flow rates can be increased up by raising the temperature and by changing the nature or polarity of the mobile phase. Amounts of solute separated by HPLC are normally too small to collect so a UV lamp is used to detect the presence of each component as it passes through the column.

As each solute passes through the detector, the absorption of radiation is recorded as a peak in a chromatogram.

HPLC coupled with mass spectrometry is a powerful analytical process but other methods of detection/analysis can be used which work in conjunction with chromatography. Some of these include IR spectroscopy, UV/Vis spectroscopy and fluorescence spectroscopy.

A gas chromatograph utilises a narrow tube known as the column, through which a vaporised mixture flows in a carrier gas stream (this is known as the mobile phase).

The gaseous constituents flow at different rates depending on their various chemical and physical properties and their interaction with the column filling (called the stationary phase).

The function of the stationary phase in the column is to separate different components, causing each one to exit the column at a different time (retention time). The retention time might be altered by the carrier gas flow-rate and the temperature for a particular purpose.

In a GC analysis, a known volume of gas or liquid is injected into the “entrance” of the column, usually using a microsyringe. As the carrier gas sweeps the mixture of molecules through the column, the motion is inhibited by their adsorption, either onto the column walls or onto packing materials within the column. 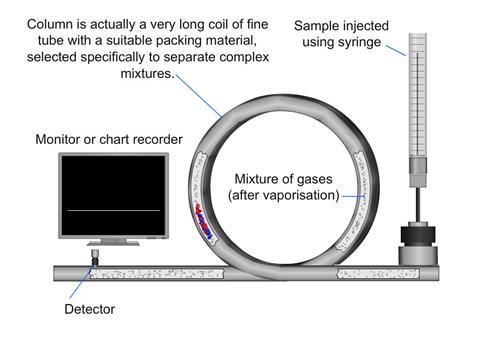 The rate at which the molecules progress along the column depends on the strength of adsorption, which in turn depends on the type of molecule and on the stationary phase materials. Since each type of molecule has a different rate of progression, the various components of the mixture are separated as they progress along the column and emerge from the end. A detector is used to monitor the outlet stream from the column. The time at which each component reaches the outlet and the amount of that component can then be measured.

Generally, substances are identified (qualitatively) by the order in which they emerge (elute) from the column and by the retention time of the compound in the column.