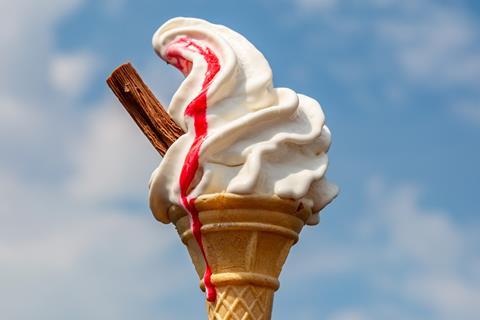 For such a simple pleasure, ice cream involves some complex chemistry

With longer, warmer days approaching, the sounds of summer are finally here: the drone of lawn mowers, the thwack of leather on willow and the incessant screams of young children demanding ice cream. To be fair though, there are plenty of adults who can’t pass a gelato shop, park cafe or ice cream van without succumbing to temptation either. There is just something so satisfying and refreshing about an ice cream on a hot day.

Ice cream has been around a long time. Some sources mention ice cream-like foods originating in Persia in about 550BC. Some even believe that the Roman Emperor Nero had snow collected from the mountains and mixed with honey and wine to make sorbet. These days we have hundreds of different types of ice cream, from the usual ice cream van favourites to gourmet gelatos and experimental savoury flavours.

Use this article to introduce students to the world of food science and the research that goes into serving up the perfect ice cream cone. The accompanying data analysis exercise provides an opportunity for students to develop their disciplinary knowledge by looking at the work of food scientists and their investigations into factors that affect ice cream viscosity.

On the face of it, the main ingredients of ice cream as we know it are really simple: milk, cream and sugar. But just mixing these with some flavouring and putting it in the freezer is not going to give you a good result. The secret to great ice cream lies in how the mixture is mixed, how quickly it’s frozen and some key extra ingredients that change things like viscosity and freezing point – all important for the right texture and taste.

Brent Murray, professor of food colloids at the University of Leeds, believes understanding ice cream chemistry begins with realising that it’s an emulsion and a foam mixed together. ‘Your basic ice cream mix is just milk, cream, sugar and flavourings, which gets homogenised to form an emulsion of fat droplets in water, which wouldn’t ordinarily mix,’ he says. ‘There are natural emulsifiers present in the form of milk proteins, which surround the globules of fat and aid this process.

‘Some artisan ice creams leave it there, but most commercial recipes need to add extra emulsifier, like glycerol monostearate [GMS],’ Brent continues. ‘The confusing thing is that the role of this extra emulsifier isn’t to stabilise the emulsion even further, but rather to destabilise it a bit.’

In this activity students analyse real data investigating how the amount of fat in ice cream affects its viscosity and practise calculating the rate of change from data represented as a line graph.

Emulsifiers like GMS replace some of the milk protein molecules that surround each fat globule. ‘These small molecules, with lower molecular weight, will always outcompete the larger milk protein molecules, partially displacing them, and this can make the droplets slightly less stable. They stick together a bit more and that, in turn, helps the mixture to stabilise and retain air bubbles of small enough size,’ says Brent. 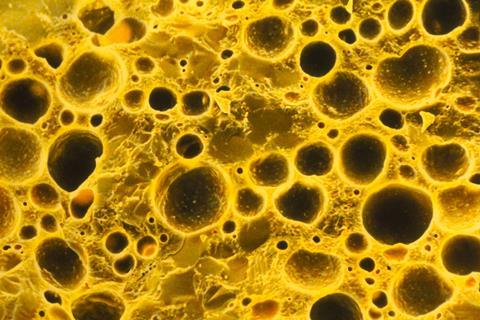 Air bubbles in ice cream, captured here by a scanning electron microscope, need to be about 20 µm in size and as uniform as possible for that delicious creamy taste

As the mixture is stirred and frozen in the ice cream machine, it is also whipped to aerate it. Most ice creams have a significant amount of air trapped in them – up to 125% of the volume of the ingredients in some supermarket ‘value’ products, though less in gourmet-style gelatos.

‘To get the right creaminess and stability, the air bubbles in ice cream need to be about 20 µm in size, and as uniform as possible,’ continues Brent. ‘An air bubble that size in water would dissolve quickly – perhaps in a couple of minutes – because air is quite soluble in water. A combination of natural foaming agents (proteins again), the aggregated fat droplets, plus freezing as fast as possible to increase viscosity, helps to trap the bubbles at that small size.’

As well as air bubble size, another factor that affects the creaminess of ice cream is the amount of fat included in the first place, says Ruben Proto, founder of Manchester-based Rogue Artisan Ice Cream, who is famous for his scientific approach to gelato. ‘The amount of fat in the mixture masks the presence of any large ice crystals, so the end product is perceived as smooth and creamy in the mouth,’ he says.

While ice crystals are always present in ice cream, keeping them small (just as with air bubbles) is really important for a creamy result. ‘That’s really down to two things,’ Ruben continues, ‘the viscosity of the mixture and the rate of freezing. The more viscous the mixture, the creamier it is. You can control the viscosity either by upping the total amount of solids in the mix, like fat and sugar, or by using a stabiliser – I tend to use alginate.’

Alginate – the sodium salt of alginic acid – is found naturally in seaweed and used extensively in the food industry. In ice cream, calcium ions from the milk cross-link alginate molecules to form a kind of lattice that makes the mixture more viscous. ‘You can also use common gum stabilisers like xanthan gum,’ Ruben adds. 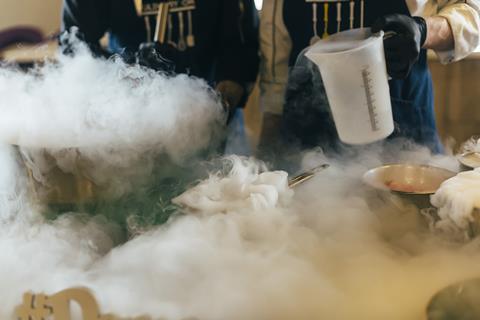 The rate of freezing has a big effect on the finished ice cream because it affects how large the ice crystals can grow. Large crystals can cause the end product to taste watery or icy, with a coarse, rough texture. The secret to great ice cream is to keep the crystals small. ‘There are two types of freezing,’ explains Ruben, ‘dynamic freezing, where the mixture is moved around at about -6˚C, usually in the ice-cream mixer, and static freezing, which is much colder and doesn’t involve any stirring. Ice crystals will grow in the dynamic freezing stage, but not during static freezing. So, you want to get your ice cream out of the machine as quickly as you can and into a cold chest or blast freezer at about -18˚C.’

‘If your freezer takes eight hours to get the mixture down to -18˚C then you are going to have more ice crystals in it than if you achieve that in two or four hours,’ Ruben says.

The walls of an ice-cream maker are pretty cold, about -32˚C, but the mixture is moving all the time, so it never reaches this temperature. Of course, colder substances, which you’d usually find in the lab and not the kitchen, have also been tried, such as liquid nitrogen. ‘That’s terrific theatre!’ says Ruben. ‘And it creates an incredibly creamy product. With liquid nitrogen you only need one or two minutes in the ice machine before you can transfer to the deep freeze. The rate of crystal nucleation – the birth of ice crystals – is much faster, so there are more of them, but they are much smaller.’

Experimental chefs like Heston Blumenthal were among the first to try approaches like liquid nitrogen freezing, alongside novel combinations of flavours. Who can forget Heston’s famous bacon and egg ice cream, which was on the menu at his restaurant The Fat Duck for years.

‘The secret with that kind of thing is to pick two flavours that have the same kind of flavour molecules in them, even if they don’t immediately sound compatible,’ says Ruben. ‘I had great success with chocolate and blue cheese ice cream and I’ve even experimented with roasted cricket.’ 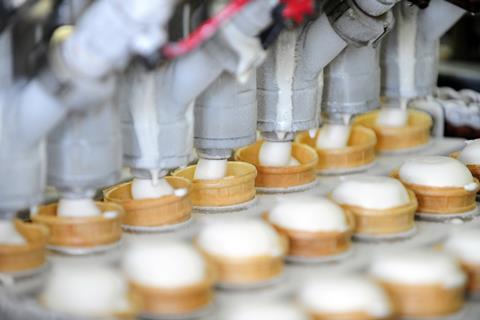 Want to hazard a guess at the annual average consumption of ice cream in litres in the UK? Just 9. In the US, it’s a whopping 20, according to the Ice Cream Alliance

Yes, you read that correctly: roasted cricket. Ruben says he took notice of a World Health Organisation report that said using insects as food is a good way of tackling climate change, so he roasted up some crickets, ground them into a powder and added them to a batch of ice cream. What did it taste like?

‘Rather like prawns,’ he laughs. ‘I’m not sure it would catch on really. Although if Heston’s bacon and egg recipe worked then maybe I should revisit more savoury recipes.’

Another need for alternative formulations has been the market for vegan ice cream. As well as replacing the cream, there is a need to replace the egg yolk emulsifier too. ‘There are actually a lot of options for vegan ice cream,’ says Laura-Alexandra Smith, a food scientist working at the Royal Society of Chemistry.

‘You can replace the dairy from cream and milk with coconut, soy or almond milk, or even the oils from things like bananas and avocados. The fat proportions are very different in these recipes, so they can require a different approach when you’re making them and taste a little bit different, but the results are good,’ she says.

There is a lot to ice cream making, considering the basic nature of its ingredients. Every country has a different way of making a traditional type, from icy Sicilian gelatos to the sweet kulfi of India. The differences are as much down to physical processes as to the ingredients themselves, and the good news from Ruben is that you can get great results at home.

‘At home you can use what you like, and you don’t need a commercial kitchen – I’ve had really good success with domestic ice-cream makers. I’d argue that a good recipe is the most important thing of all.’

Article by Ian Farrell, a freelance journalist and photographer, based in Cambridge. Resource by Catherine Smith, a secondary school teacher at Hinckley Academy and John Cleveland Sixth Form Centre