How to teach scientific models 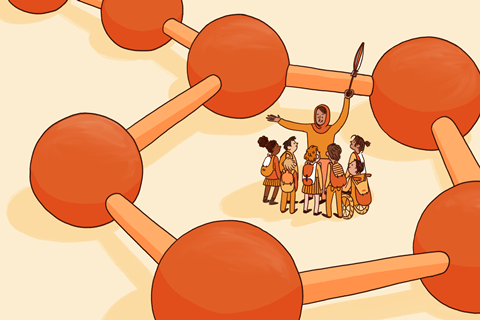 Some scientific models – like (A) – are the scientific ideas/theories themselves. Other examples include the particle model of solid liquids and gases, geocentric and heliocentric models of the universe, and the plum-pudding and nuclear models of the atom. These models attempt to describe nature (‘OK, maybe atoms are like this’), especially aspects of nature which can’t be directly observed. Models like this are often created in order to explain experimental results – such as the Rutherford experiment, or where and when P- and S-waves are detected after an earthquake.

Whereas, other scientific models – like (B) – are illustrations or representations of scientific ideas. Think of molymods, the bell-jar model of the lungs or the rope model of electricity. A plastic model heart is a more direct representation. These models are usually created to be ‘illustrative’ teaching aids, analogous systems to help students accept or ‘see’ how a scientific idea works, rather than being explanatory.

This distinction isn’t always clear cut. For example, equations (mathematical models) like PV=nRT probably show both aspects; they attempt to describe nature while being abstract/mathematical representations too.

Scientific models can be physical models, analogies, visual pictures/representations (often held in the imagination, or diagrammatic/symbolic), mathematical equations or computer codes (eg climate models) that generate predictions, data, images and visualisations. ‘Scientific model’ can be an umbrella term for many different things.

Download a summary of scientific models as MS Powerpoint or pdf and worksheets to get students thinking about and using models as MS Word or pdf.

So, actually, there’s quite of lot to unpack within the concept of a ‘scientific model’. It’s probably a good idea to explicitly teach this to students, so they have a better idea of the overarching concept of scientific models before they’re asked to start critiquing. You can download a summary of these models to share in class, below.

Unless told otherwise, students might assume that models work perfectly. Models are often developed to show one particular aspect, but may not show other important aspects at all – and this is fine. Once a deficiency has been identified, ask: what should we do? Students need to know that adapting the model is an option. But it can also be valid to continue using a limited model, as long as you acknowledge the limitations and only use the model within these limits.

They’ll struggle unless they know the science well

Deeper learning occurs when students have to think hard. But they will struggle to identify what models don’t or can’t show if they don’t have sufficient knowledge. If students don’t already have a secure knowledge of bonding, they’ll struggle to identify that Molymods can only represent covalent compounds (as Molymods don’t have a way of showing ions). Likewise, if students don’t already have a good understanding of atomic scale, they’ll struggle to critique the scale of sub-atomic particles in plasticine model atoms. Avoid using a particular model to teach a concept, then immediately asking students to critique that very model!

Structures direct students’ attention to the features you want them to consider. The downloads below will help.

This article is part of the series 7 simple rules for science teaching, developed in response to the EEF’s Improving secondary science guidance. It supports rule 3c, Expliticitly teach pupils about models and encourage pupils to critique them.

Tom NorrisTom is the head of physics at Huntington School, York and a coach at the Institute of Physics