How to challenge misconceptions

To build on conceptual learning, students must fully understand those concepts. To do that, you need to return to that knowledge repeatedly

If you hold a pen in your hand, suspended in the air, and let go of it, where will it go? Up or down?

If you’re standing on Earth, the pen will probably drop down to the floor, and this is unlikely to take you by surprise, because you understand how gravity acts on objects. Gravity is a transformative concept that acts as a ‘portal’ to deeper understanding, and we are unlikely to ‘forget’ it, because it’s continually reinforced by occurrences in the world around us. 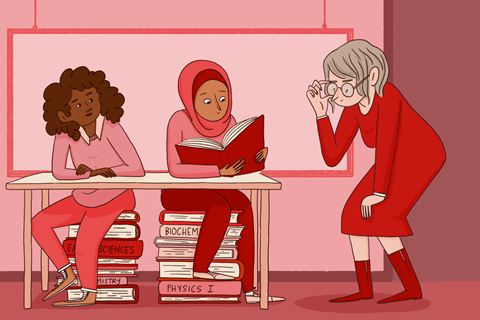 When we teach science, we constantly introduce our students to new concepts, some of which are fairly straightforward to understand or quite specific. But some are more complex, and underpin a range of ideas. Particle theory, for example, is at the heart of a range of topics in chemistry. Melting points, bonding, electrical conductivity and solubility are just a few of the ideas that require an appreciation of how particles behave.

Do you ever explicitly review basic particle theory with 11–14 and 14–16 students, and point out how it relates to the ideas you introduce to them? When I first taught students about fractional distillation, I was explaining why larger molecules have higher boiling points. But I hadn’t first explained to them that each of the molecules I was talking about was represented by a circle in the particle diagrams they used in year 7. Without this, many were floundering, and couldn’t connect the two ideas.

If I’d pointed out the parallels between my newly introduced idea and the well-understood, fundamental concept from the start, they would have appreciated more readily why intermolecular forces affect boiling point. But even after this link was made, students would still need to understand more generally why some liquids have higher boiling points than others. This, of course, also links back to particle theory.

So particle theory, like gravity, really is a transformative concept, upon which many later ideas are built. Such integrative ideas can be described as threshold concepts, because they pave the way to deeper understanding. Such concepts are often tricky to master, but they allow students to make all sorts of conceptual connections that were previously out of reach.

Wouldn’t it be great if our students could remember these concepts indefinitely, and apply them unaided to a range of contexts? In my experience, students often appear to ‘unlearn’ the concepts we’ve taught them, and struggle to relate them to novel situations. How many times have you felt exasperated as you explain, yet again, that it’s not electrons that move and carry charge in molten sodium chloride, it’s ions? Learning is a liminal process, with students often taking steps backwards as well as forwards, before they achieve conceptual mastery. So we need to revisit and review these ideas with our students in a range of contexts, to ensure they’ve fully (and securely) understood them.

Revisiting concepts with students might be wise for other reasons, too. How often have you started to teach a tricky idea, before deciding to stop and return to it another day? Sometimes, you can see students becoming visibly overloaded, and unable to take any more on board. You know from experience that, following a little time and space to forget and reflect, students are much more likely to understand these new ideas.

Download a tracker and diagnostic question examples to help you monitor students’ progression as MS Word or pdf.

But how do you identify the concepts in a particular topic that students will find tricky? A good starting point is misconceptions literature and resources, which are freely available on Learn Chemistry. You can use these to identify common stumbling blocks, and make sure you review them explicitly, using resources like this one on ionic bonding.

As teachers, we shouldn’t take conceptual understanding for granted, and we can’t guarantee that it will be immediately transformative. But if we identify the key underlying concepts in each topic we teach, and revisit them a number of times, in different contexts, our students are much more likely to integrate them and remember them long-term.

This article is part of the series 7 simple rules for science teaching, developed in response to the EEF’s Improving secondary science guidance. It supports rule 1c, Allow enough time to challenge misconceptions and change thinking.