6
Working with students to decolonise the curriculum
Feature

Working with students to decolonise the curriculum 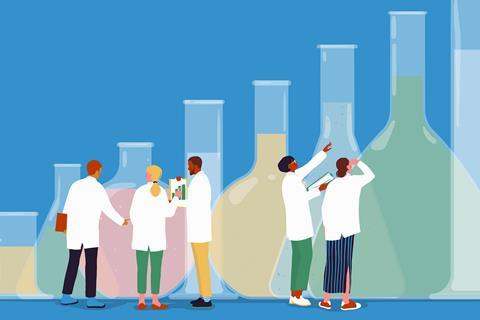 A project-based and a co-creation approach can help close the awarding gap, as Kingston University has demonstrated

Decolonisation of education is a multifaceted process. The first thing Neil Williams did at Kingston University in London was pivot towards active teaching practices to make his course more accessible. ‘The evidence indicates that active learning teaching methods and alternatives to closed-book exams provide more inclusive teaching and assessment methods,’ he explains.

Neil began this journey in autumn 2018 after Kingston collated data on the difference in average marks between White students and Black, Asian and minority ethnic students on every module for the 2017/8 academic year. In his module – first-year foundation in inorganic and environmental chemistry – non-White students averaged 12.2% less than their White counterparts. This was the largest gap of any module in his department at Kingston.

The most significant change Neil made was reducing the numbers of lectures. ‘I used to give a series of interactive lectures, but now it’s mostly project-based learning workshops where students investigate the topics themselves and help co-create the curriculum,’ he says. Students work in teams and are encouraged to pick an atmospheric chemistry pollution problem that resonates with them personally. Over 80% of Kingston’s science cohort is from Black, Asian and minority ethnic backgrounds. ‘Getting the students to co-create the content means they can look at data from different parts of the world as well as the impact across the globe,’ says Neil. This was an easy way to decolonise the course content, he adds.

As part of the change, the traditional exam was modified with the inclusion of a seen exam question based on the project-based learning work. Neil also began using Learning Science laboratory simulations to introduce students to various wet chemistry and analytical techniques before they entered the lab. Online pre-lab activities are a recognised way to benefit students who arrive at university with little experience in the lab.

Following all these changes, the awarding gap between White and non-White students in 2018/9 for Neil’s module was closed. Neil is now using this data to encourage his fellow Kingston lecturers to make similar changes. ‘I am interested in encouraging other people to reflect on their own teaching and make changes in their own practice,’ he says.

In November 2019, Neil canvassed the opinions of 141 science students at Kingston about decolonising the curriculum they were being taught to further support his case for change. The survey results showed considerable student support for the decolonisation of the science curriculum, especially among students from Black African/Caribbean descent.