7
A journey towards decolonisation
Feature

A journey towards decolonisation

It is often the humanities and social sciences departments that spearhead efforts to decolonise undergraduate curriculums, but at the University of York the department of chemistry has taken the lead.

Caroline Dessent, then chair of the chemistry department’s equality and diversity group, initiated this work along with Leonie Jones, the department’s employability and diversity officer, after students started requesting it in early 2019. Their first step was to establish a decolonisation steering committee, consisting of both staff and students, to direct the process.

Realising that the concept was likely new to most chemistry academics and teaching staff, committee members concluded that clear communication would be crucial to the process’ success. Caroline, who is now head of the University of York’s chemistry department, started by presenting to staff on the topic during a board of studies meeting. This was followed up with an article in the department newsletter and an email with examples of decolonised chemistry lectures – the latter was circulated with a request that academics and teaching staff consider refreshing their own lectures in similar ways.

People tend to overestimate how arduous decolonising their lectures is, explains David Smith, chemistry academic and member of the department’s equality and diversity group. ‘Probably 1% of the lecture will be presenting additional globalised context compared to 99% of teaching the chemistry as you have always taught it,’ he adds.

Many of the University of York’s chemistry lecturers have since incorporated mentions of more non-White scientists and their work into lectures – to better reflect the true global nature of science. Examples include the Punjab-born biochemist Har Gobind Khorana, who pioneered the chemical synthesis of oligonucleotides, and George Washington Carver, a US agricultural scientist who was born enslaved and went on to champion environmentally-sustainable food production methods.

Undergraduate laboratory manuals are also being updated to include information boxes on the global origins of some common techniques. While doing distillations, for example, students will learn about the eighth century chemist Jābir ibn Ḥayyān who devised the first distillation apparatus. ‘There are quite a few techniques that we use routinely in synthetic chemistry that have their origins in alchemy,’ explains Caroline.

Anti-racist content has also been introduced into some chemistry courses. In his lecture on malaria drugs, for example, David mentions how the Chinese chemist Tu Youyou discovered artemisinin while screening thousands of Chinese herbal remedies – an effort that earned her the Nobel prize in physiology or medicine in 2015. ‘I talk [to my students] about how they might have a particular view of traditional Chinese medicine, fed through the filter of the Western media, and try to get them to see the world in a broader way,’ David says. 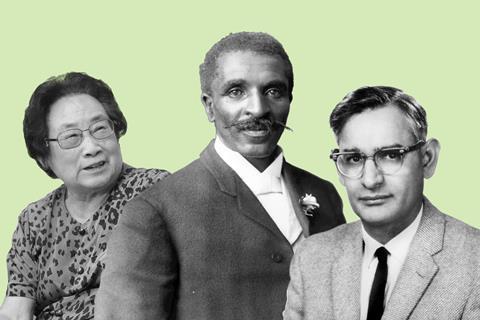 From left to right: Tu Youyou, a pharmaceutical chemist who developed malaria treatment; George Washington Carver, an agricultural scientist and inventor who promoted crop rotation; and Har Gobind Khorana, a biochemist who worked on the genetic code

Caroline highlights electric car batteries in another lecture to allow discussion of the huge environmental impact of mining the nickel needed in these batteries. ‘This topic allows discussion of how Western and global interests compete,’ she explains.

Furthermore, in their first term at the University of York, chemistry students attend compulsory equality, diversity and inclusion sessions as part of a ‘being a professional chemist’ skills module. Organised by Leonie, these sessions allow students to hear from staff who have been marginalised. ‘One of our academics, Avtar Matharu, talks about his experiences as a minoritised chemist,’ says David. In addition to demonstrating to students in marginalised groups that the department is working on improving things, these sessions also set clear expectations for everyone else. ‘It’s about creating an inclusive ethos,’ David explains.

Ongoing initiatives include rewriting hairstyle requirements with regards to teaching labs, to balance the measures currently in place for safety reasons with not discriminating against Black hairstyles. ‘We’ll have a more inclusive policy in place ready for the start of the next academic year,’ says Caroline.

‘We haven’t finished the journey, there’s still a considerable way to go, including identifying and acting on any awarding gaps for minoritised students,’ Caroline says. To direct the next steps, the department will shortly begin interviewing Black, Asian and minority ethnic students and staff about their experiences in the chemistry department. This project is being funded by a Royal Society of Chemistry Inclusion and Diversity Fund grant. ‘It’s a listening experience,’ Caroline explains, ‘that we hope will provide further direction in terms of what still needs to be changed to improve the departmental culture experienced by minoritised students and encourage them to continue in careers in chemistry.’