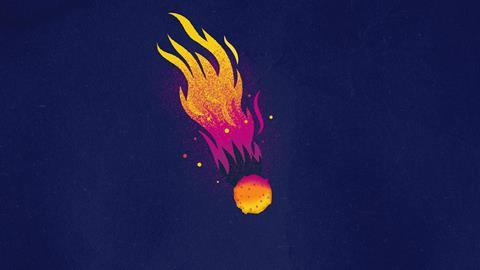 When a rare meteorite landed on a driveway in Gloucestershire, scientists could hardly contain their excitement

On a quiet evening in February 2021, a meteor hurtled through space before smashing into a nondescript driveway in Winchcombe, Gloucestershire. With the remains likely to hold secrets from before the solar system existed, excited scientists scrambled to collect every fragment and dust particle. Meanwhile, another chunk was found to have landed safely in a nearby field.

Most meteorites come from asteroids: rocky objects left over from the formation of the solar system that orbit the Sun. When a piece of an asteroid, a meteoroid, enters the Earth’s atmosphere, it heats up, producing a bright light in the sky called a meteor. Meteoroids that survive the fiery journey to land on Earth’s surface are known as meteorites.

Meteorite analysis is a fun context to engage learners who have just been introduced to element symbols and chemical formulas. Learners should be able to use the periodic table to name elements found in meteorite samples and differentiate between metal and non-metal elements.

Several types of meteorite are found on Earth. Iron meteorites represent the cores of planets, achondrites the silicate crusts, while chondrites come from the oldest rocks that never melted. The Winchcombe meteorite is a rare type known as a carbonaceous chondrite, the first of its kind to land in the UK. Often described as time capsules from the beginning of the solar system, carbonaceous chondrites are the most pristine meteorites. Containing a mixture of minerals and organic compounds, they can provide unique information on how water and life’s building blocks reached Earth.

‘We can’t easily sample the core and mantle of our own planet and Earth is constantly evolving due to plate tectonics,’ explains Chelsea Sutcliffe, a research associate at the University of Toronto in Canada. ‘Because of the generation of new crust, we can’t use Earth’s rock record to look back further than three billion years ago. Instead, we can use meteorites as the original reference points to understand how planets evolve and what chemical processes shaped the Earth into the differentiated and chemically complicated planet that it is today.’ Analysing tiny calcium–aluminium inclusions in chondrites has allowed scientists to date the solar system to approximately 4.6 billion years, she says.

Use meteorite composition data including numbers below zero and percentage values to develop students’ key mathematical skills. Learners will also choose appropriate data to draw on a bar chart, practising another key skill.

Use meteorite composition data including numbers below zero and percentage values to develop students’ key mathematical skills. Learners will also choose appropriate data to draw on a bar chart, practising another key skill.

Luke Daly, a lecturer in planetary geoscience at the University of Glasgow, was in the search party for the intact Winchcombe meteorite, although his partner Mira Ihasz was lucky enough to be the one to spot it. ‘One reason that this meteorite is so exciting is because we got to it so quickly and so there are minerals – salts – in it that we don’t normally see,’ says Luke. Water soluble substances soon disappear from meteorites exposed to the weather. 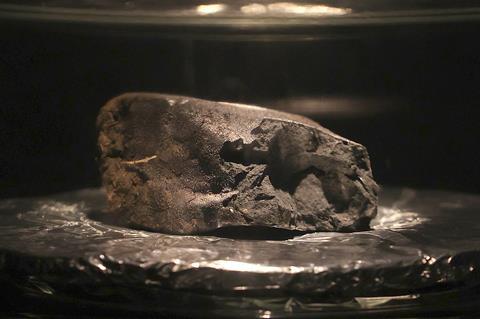 There have been very few studies on meteorite salts, but in 2018 a team led by Queenie Chan at Royal Holloway, University of London analysed sodium chloride and potassium chloride crystals in meteorites found in the US and North Africa in 1998.

The study was the first to analyse organic compounds trapped inside salt crystals, giving a snapshot of the fluid that would have percolated through the asteroids half a billion years ago. It revealed that the crystals hosted an ‘extensive variety’ of organics, suggesting that the original parent asteroid contained a combination of precursor molecules for complex chemical reactions to occur. ‘Hopefully, they will see similar salt crystals in Winchcombe and be able to get another insight into what the fluid composition was like on these asteroids,’ says Luke.

Queenie’s team is now part of a Winchcombe consortium study, with London’s Natural History Museum handing out samples. Luke’s team is also taking part and will analyse meteorite ‘presolar grains’ that predate our solar system – otherwise known as stardust – in a bid to find out how the parent asteroid evolved. They plan to use a technique called nanoscale secondary ion mass spectrometry (nanoSIMS) at the Open University to map isotopes such as oxygen.

The team are on the lookout for anomalies suggesting that grains did not form in our ‘relatively isotopically homogenous’ solar system. Pre-solar grains are very isotopically different, Luke explains. ‘You can do a map with a nanoSIMS instrument and see super-bright hotspots of huge enrichment or depletion in oxygen-18 or oxygen-16. It looks nothing like anything in our solar system.’

You can download an app called Fireballs in the Sky, which can help scientists to work out where a meteorite may have landed as well as alert you to impending meteor showers. The website also features a set of teaching resources for ages 4–12.

Preliminary data suggest that the Winchcombe meteorite may contain more than one rock type. ‘It looks like a hotchpotch of different water-rich early asteroid bits,’ says Luke. The thinking is that it may have resulted from a series of different asteroid collisions. ‘By looking at the differences in chemistry, mineralogy and isotopes we can start piecing the puzzle back together.’

‘Planetary science is in a second golden age. The first golden age was when Apollo came back from the Moon and everyone was really excited about new samples,’ says Luke. Analytical techniques such as mass spectrometry are ‘so good now’. Not only are new tools coming online that people hadn’t thought of applying to rocks before, but space missions are also getting more ambitious. ‘It’s a really exciting time in be in planetary science.’